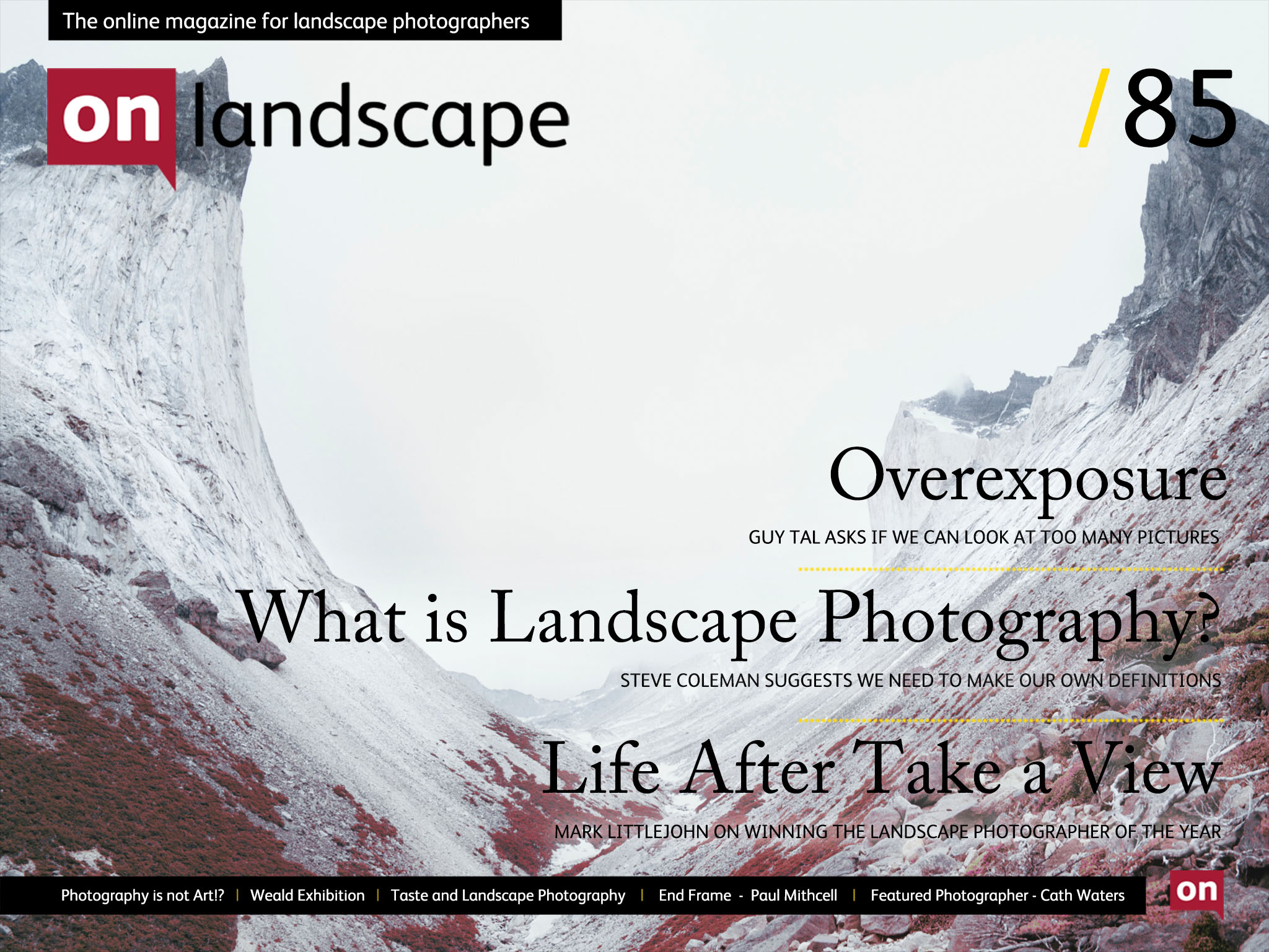 An Exhibition Review by Paul Mitchell

Paul Mitchell Discusses on of this Favourite Images

It's Fine but is it Art?

Guy Tal asks is too much bad for you

With some of the reactions that the landscape photographer of the year winner has had (as mentioned in the latest issue) you'd be forgiven for thinking that landscape photography was only valid if it included a horizon and never veered from a documentary recording of the world in front of our cameras. Well we all know different but it's worth thinking more about the subject as Steve Coleman does in his article about the bounds of the subject we love. The truth is that even if we don't want to engage too much with alternative definitions of the landscape, we can only be enriched by exposing ourself to a more varied photographic world. Then again, Guy Tal looks at the possible downfalls of looking at too many images.
I've been spreading my photographic wings over the last two weeks and have invested in the A7R plus the unusual selection of a Canon 24-70 to mount in front of it. I'll be writing more about how I went about choosing this camera and my plans for the future in the next issue. It's not all digital for me though, I still use film cameras and a lot of you have asked for some guidance using these too so there will also be more of that. Christmas holidays!? Fat chance!!

You can download the PDF by following the link below. The PDF can be viewed using Adobe Acrobat or by using an application such as Goodreader for the iPad. Click here to download issue 85     more →

I have known David and admired his work for a few years now though our mutual connection with the filmwasters.com forum. During that time I have followed the progress of David’s 5 year project to capture the essence of the Sussex Weald and was eagerly awaiting the culmination of this project - an exhibition of 51 superb platinum/palladium prints at the Ashdown Forest Visitors Centre. While I was hoping to more →

When Tim Parkin asked me if I would consider writing an article for OnLandscape I didn’t really have to think hard to come up with a first topic. Thanks to Charlie Waite and Take a View there hasn’t really been much on my mind (or in my diary) for the last month. Competitions aren’t something that I spend a great deal of time with. Apart from the Take a View competition I don’t actually enter any. This year I more →

As I sit down to compose this editions End Frame I am listening to the news on the radio, much of which is taken up by the on-going ‘weather bomb’ affecting the Northern parts of the UK. High winds, huge waves, rain, hail and snow! It seems fitting then that my personal choice of image is entitled ‘Storm Warning’. It has not gone unnoticed that previous End Frame authors have also had difficulty in choosing one’s personal, all time, favourite more →

Landscape photography receives little wholly positive press in the newspapers but most coverage of photography in general is neutral to positive. However, over the last few weeks a certain journalist from The Guardian seems to have taken the reins from Brian Sewell and ridden full blast into the anti-photography hall of fame. Jonathan Jones started his little escapade with the subtley titled “Flat, soulless and stupid: why photographs don’t work in art galleries” In this essay he has some great quotes on photography more →

I’ve been enjoying her images for a while, which sit somewhere between landscape photography and digital art. more →

As you may already know from the interviews we have done with him, Mark Littlejohn was voted as the Take a View Landscape Photographer of the Year. The picture chosen was one that gathered quite a lot of praise online from many people who have previously criticised the competition (including me) but to say it was universally acclaimed is a stretch considering some of the quite vociferous abuse it has received on Facebook. more →

For me, photography is first and foremost a creative pursuit. Therefore, everything I think of and do with my photography is influenced by this. more →

If we, as artists, fail to make such investments in learning the history and traditions of our medium, and in the appreciation of worthy photographic works offering more than the simple feats of dazzling viewers with color or views of exotic locations, how can we hope that others will? more →