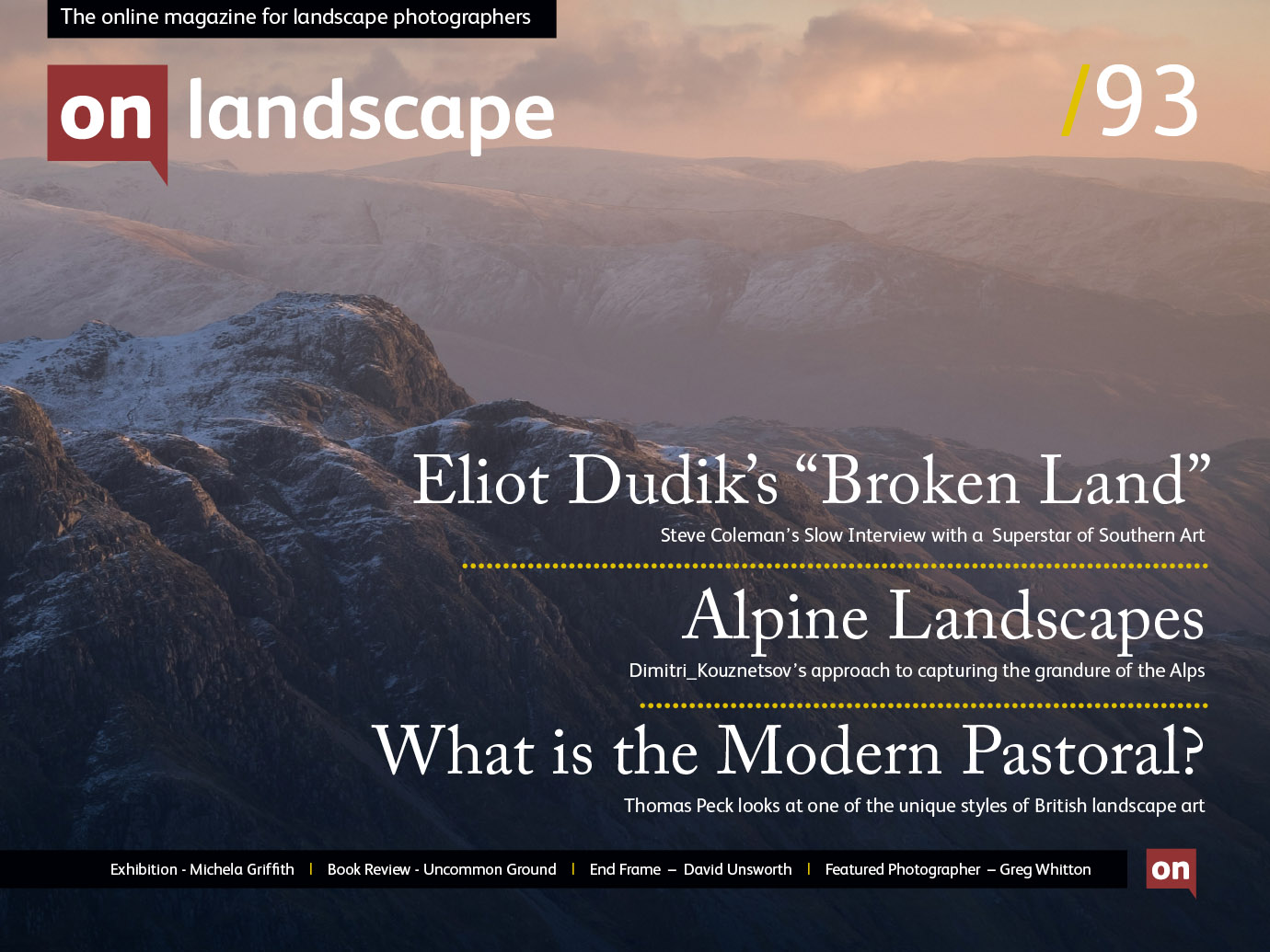 Thomas Peck looks at the tradition of the pastoral landscape & questions whether the pastoral is a peculiarly English phenomenon…?

Eliot Dudik talks about his acclaimed project ‘Broken Land’ and its relationship with the deep divides in contemporary politics and culture in the United States.

It's a rich time of year for new equipment what with Canon releasing the new 5DS and 5DSr and only yesterday Sony announcing the successor of the Sony A7R, the aptly named "A7Rii". Both cameras are taking resolution to the next level with Canon ruling the roost at 50mp and Sony not far behind. They're very different beasts though and we look forward to using both in anger.

The Sony isn't out for another couple of months though and the 5DS and 5DSr are both out now and weíve been testing these in the field over the last few weeks, article to come soon.Weíve also been busy moving in but weíve also been building a camera testing rig which is almost complete, more about that later.

Now we're settled in our new home we've been able to explore our new area and it's amazing how a few miles down the road can change the whole vibe of a region. Nearby we have wetlands and wolds - lots of bird life (we've seen hobbys, marsh harriers and montagues and even have a barn own in the stables. I'm not going twitchy though!) and large areas of combined heathland and woodland. So it's not just discovering what these new cameras are made of but also discovering whatís on my new doorstep.

This issue covers a lot of ground with many full size images from the wonderful Eliot Dudik's 8x20 colour negatives of the sites of US battles, through Michela Griffith's Confluence details, Greg Whitton's mountainscapes and Dimitri Kouznetsov's Alp's studies and finishing with some commentary on the photographic Pastoral from Thomas Peck with wonderful images from Alexander Gronsky.

You can download the PDF by following the link below. The PDF can be viewed using Adobe Acrobat or by using an application such as Goodreader for the iPad. We've split the PDF into highest quality and small download versions now. The small download is still good enough quality for general browsing but you won't be able to zoom into the smaller images as much as with the larger. Click here to download issue 93 (high quality, 85Mb) more →

This is a bit of a departure for my usual book purchasing, it's more in line with a dictionary or encyclopedia than a photography book but I think it's definitely of interest to those with a passion for the landscape. The basic premise of the book is a journey through some of the less well known words for the landscape features of the British Isles. Dominick grew tired of describing more →

I have not given much thought to horizon lines for a long time. Indeed, I have not given much thought to straight lines in general for a long time. Living in the heart of the Lakeland fells as we do, or did, straight lines do not feature in the landscape very much and where they do occur they seem an unwelcome intrusion on our sensibilities; inevitably man made and symbolic of our disregard, even fear, of nature’s organic more →

Michéla is a contributor to On Landscape (click to see her other articles), interviewing many featured photographers for the publication and she has just launched an exhibition at the Joe Cornish Gallery in Northallerton. Tim caught up with Michéla to talk to her about the exhibition and the project behind it. https://youtu.be/4CKTZihkfgg TP: You have an exhibition starting today (6th June) and this is the preview. Tell us a little bit about the exhibition itself MG: It’s more →

Since ancient times, the practical necessity to immortalise images of people and events was the driving force for visual art. Famous artists usually painted landscapes in a mean time between elaborating more important portraits, while landscape-dedicated painters (Claude Lorrain, Jacob van Ruisdael, John Constable, Alexandre Calame, Albert Bierstadt,… ) were not the mainstream in the beaux arts. The advent of photography in the 19th century not only scaled up portraiture, but also facilitated technique for landscape works. Ansel Adams, being on more →

The Landscape Collective UK consists of 14 landscape photographers and we meet every two months in a meeting room at the end of the Cobb at Lyme Regis in Dorset. We're quite a diverse group and we show printed work and discuss landscape photography and catch up on projects, experiments, and locations. Mother Ivey’s Bay - Andy Bell The group's work has appeared more →

Can you tell me a little about your education, childhood passions, early exposure to photography and vocation? I had an unconventional upbringing as I was a 'forces brat', my dad was in the Army. I didn't live in mainland UK until I was 15 when he was finally posted back to blighty. We lived mainly in Germany with a couple of years in Hong Kong. Holidays tended to partially involve the Alps more →

In a previous article we looked at Alan Hinkes’s photographic depiction of the Sublime. High up in the Himalaya, in the death zone, Hinkes photographed awe-inspiring landscapes, where man was insignificant and puny in the face of massive and indifferent nature. Hinkes, whether consciously or not, was tapping into an artistic genre. In the 17th and 18th centuries artists had deliberately sought to capture the emotional impact that particularly mountain landscapes had created in the viewer. The exhilaration more →

I was most interested in the idea of war, our current cultural and political standings that have been shoved down our collective throats and seem to be leading toward inevitable disaster. more →