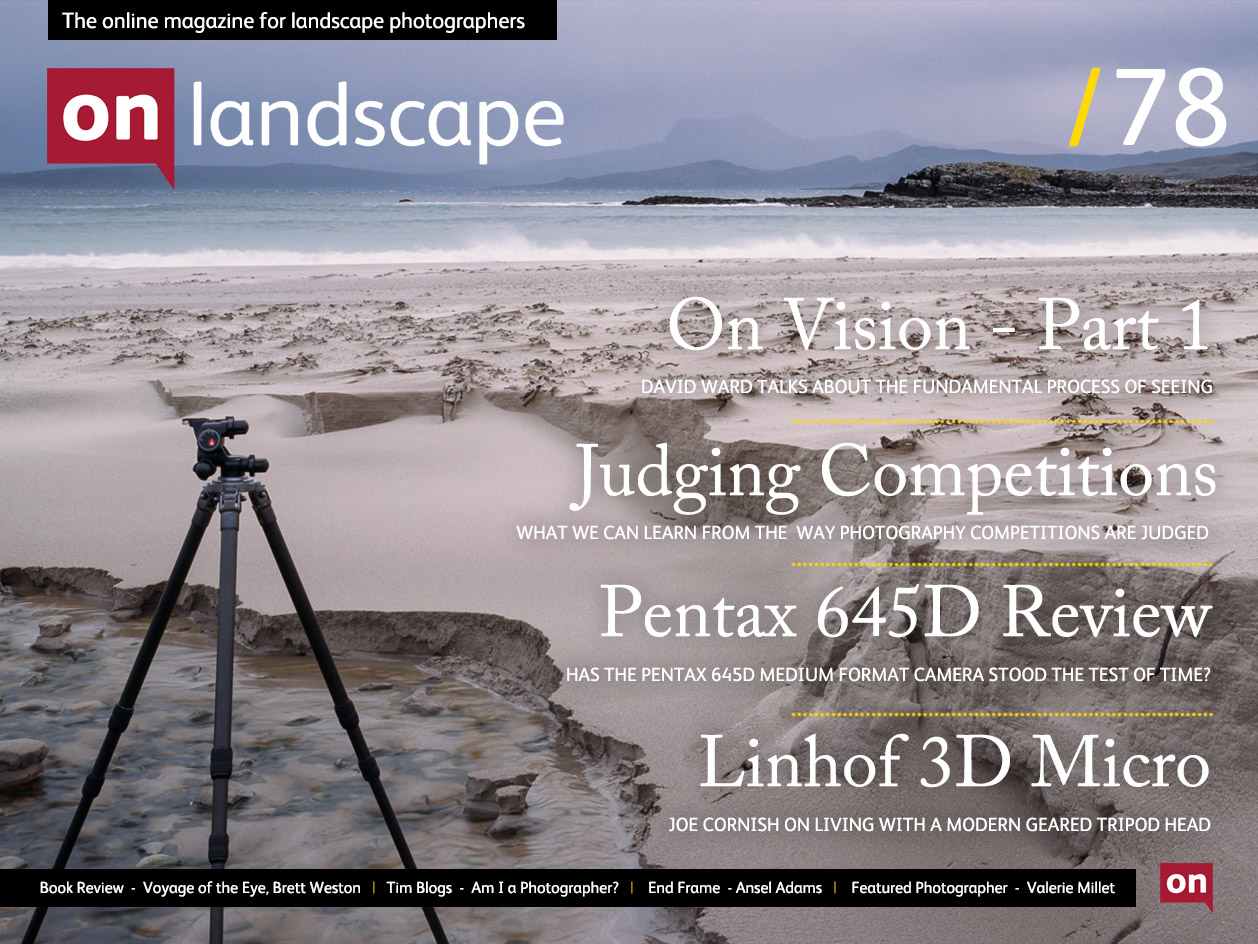 David Ward talks to us about 'Vision'

Voyage of the Eye – Brett Weston

Tim Blogs – Am I still a landscape photographer ?

Standing in for Joe this issue Tim reflects on how is time is (mis)spent !

Harvey discusses one of his favourite Ansel Adams images

One of our goals when we started On Landscape was to create a publication that was part magazine and part website and that had the best of both worlds. As part of this the PDF has been a great success and we know many of our readers take our issues on location with them where there is poor internet connectivity.

However, one of my pleasures in seeing the On Landscape magazine published every two weeks was to see the rich community discussing the articles - sometimes as interesting as the article itself. The success of the PDF has dampened this somewhat as for many people the first time they look at the magazine is in PDF form where access to the comments and discussion are at a distance.

As consumers of content about landscape photography as well as producers, we also visit various websites on a daily basis like Petapixel, The Online Photographer or DP Review and we realised that we’d like to give our readers a similar experience but in relation to landscape photography.

As such, to kill two birds with one stone (a pointy, heavy one) we’re changing how we publish the magazine after this issue. Don’t worry though, you’ll still have your PDF but the contents of the PDF will be posted online over the preceding two weeks. We’re hoping that this will give people a reason to come back to the website and hopefully because only one article will appear at a time, any discussion will be focussed on that article.

This also gives us a chance to publish a little more commentary and news, as such the news section (which was a little tumbleweedy) will be rolled back into the main magazine. Finally, we have the opportunity to include some of the discussion and comments on the articles into the PDF of the issue.

We hope that On Landscape can evolve into a place to discuss landscape photography and as such if you have any ideas for topics to put to our readership, please let us know.

You can download the PDF by following the link below. The PDF can be viewed using Adobe Acrobat or by using an application such as Goodreader for the iPad. Click here to download issue 78               more →

Hopefully, you can now begin to understand some of the correspondences and differences between human vision and the photographic image. more →

The Pentax 645D is a camera that sort of slid quietly onto the photographic stage, metaphorically speaking. First announced as a concept, there were numerous delays before it appeared in 2010 and then it didn’t really grab any headlines. Had everyone got fed up with Pentax’s indecision about the camera? Would they commit to it long term? It certainly didn’t do a lot to bolster anyone’s faith in how long Pentax would support it as a system. 645 was a more →

Voyage of the Eye – Brett Weston

Recently we’ve been reviewing quite a few ‘new’ books for On Landscape but I’m reminded upon looking at my photography book library that the majority of the books I own are second hand and quite often out of print. These are often books which are classics of their time but that you wouldn’t know existed unless you’d come across them on a friend's book shelf or a second hand book store. more →

I have now had a Linhof 3D Micro tripod head for over two years. I had used the Manfrotto geared heads 410 and 405 for at least a decade before this, but had become frustrated with their vulnerability to minor knocks and was in search of something more robust and reliable. http://www.linhofstudio.com/products/Linhof-Heads In truth the 3D Micro is not really a direct replacement for the Manfrotto heads. Its lateral tilting movements are strictly limited more →

Tim Blogs – Am I still a landscape photographer ?

Whilst wandering around the Patching’s Art Festival last month I was mentioning to my colleague Dav Thomas that I don’t really feel like a landscape photographer at the moment (or any sort of photographer for that matter). It’s true that I’d been on two very rewarding photography trips to Iceland and Scotland in February but apart from that I have been out with my camera only two other times in 2014 so far (and one of those was more →

There can be many reasons why we first pick up a camera, but sooner or later it takes us on a journey.  A relatively recent traveller is North American landscape photographer Valerie Millett.  more →

When asked if I'd be interested in writing an End Frame article, two favourite landscape images immediately came to mind. Of the two, one I've only become aware of relatively recently (although the image itself is much older), but the other I've known for what must be around twenty years now (although again the image is much older), so I decided it really had to be this image that I write about. So, in the genre of landscape photography, Ansel more →