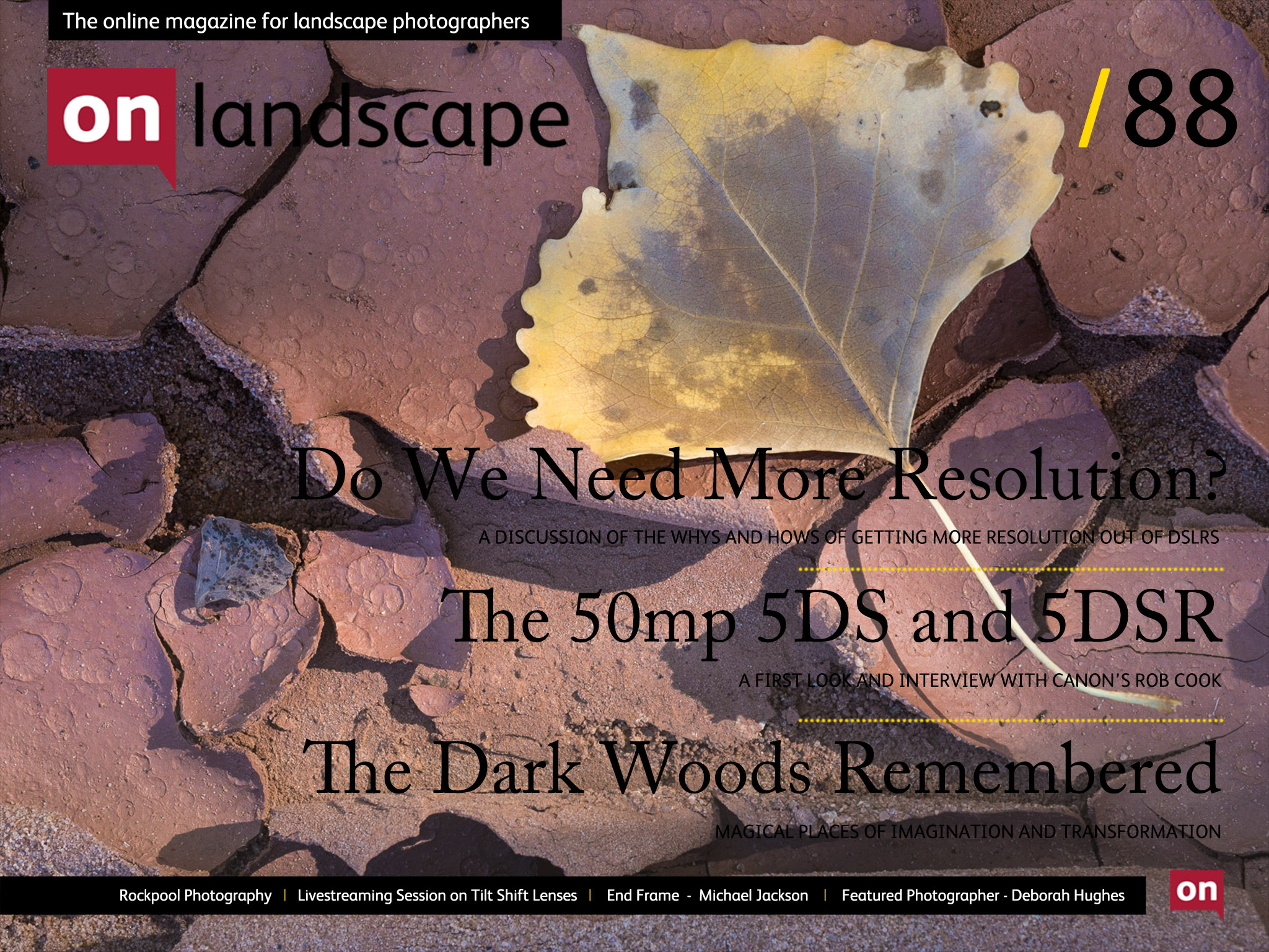 Magical places of imagination and transformation

Stories from under the Seas..

How much is enough?

A First Look (for us anyway)

Endframe – “On Being Aware of Nature” by Mario Giacomelli

Michael Jackson Discusses one of his Favourite Images

When the D800 came out, many people said that 36mp was way more than anyone would every need and yet within a year it had become a standard camera for landscape photographers. The desire for more resolution and detail may be slowing down but for big prints and colour detail, nothing beats more pixels. The Canon 5DS and 5DSR cameras are another jump in the resolution stakes and I imagine it won't be long until we see more 50mp cameras from Sony and Nikon (and possibly more).

But sensor resolution isn't useful unless our lenses can render all of that detail and although we've got some wonderful lenses appearing, depth of field and diffraction mean that to make the most of this resolution many photographers are moving to use tilt/shift lenses. Well in this issue you can read our preview of the 5DS(R), read about the ins and outs of making high resolution images and you can also join us for a livestreaming session on Tuesday next week where we'll go through the use of tilt/shift lenses and answer your questions. It's an exciting time for people who want to make large scale prints for commercial or personal use and we'll do our best to keep you abreast of all of the issues involved. In the meantime if you have any questions before our event next Tuesday, please let use know!

You can download the PDF by following the link below. The PDF can be viewed using Adobe Acrobat or by using an application such as Goodreader for the iPad. Click here to download issue 88     more →

The dark woods of fairy tales are also magical places of imagination and transformation. Fears are overcome and we emerge from the literary forest older and wiser, ready to face the dragons of the real world. more →

Tuesday 10th March, 8pm GMT We've written articles about tilt shift photography in previous issues, for instance: Tilt / Shift Photography - Introduction to lens tilts in photography What’s the Shift in Tilt / Shift? A look at lens shift with DSLR cameras The Art of Looming - An explanation of the effects of rear tilt and emulating the effect on a DSLR .. but the subject is getting more and more important to more →

I have long found the miniature worlds contained in rockpools fascinating and over the years I have taken the odd photograph from above with varying degrees of success (ideally using a polariser to cancel surface reflections). More recently, admiring oceanic photographs and noticing adverts for underwater housings for digital compacts got me thinking. It struck me that these underwater housings might offer a novel viewpoint on the world of rockpools, given I had no intentions of leaving the safety more →

There have been two constant declarations from photographers ever since the first digital camera appeared. The first was that they have "more resolution than film!" (even 3mp cameras!) and the second is that "it's as much as we need". As each increase in resolution of digital cameras increase, from 3 to 6 to 8, 10, 12 and more recently 24 and 36 megapixels - a substantial number of photographers would ask "Why do we need such resolution? I print more →

The recent announcement of the 5DS and the 5DSR have caused quite a kerfuffle, as is to be expected. What is quite surprising though is the number of people either writing the camera off, or announcing it to be the best thing since sliced bread - all on the evidence of a few jpgs and some PR interviews with Canon representatives. For instance, the specification for the camera shows the highest ISO setting to be 6400. Quite a few people more →

This issue we're interviewing Deborah Hughs, a photographer from La Sal, Utah (Near Arches National Park, Canyonlands National Park, and Hovenweep and Natural Bridges National Monuments). Deborah is retired but is still busy with her garden, grandchildren, representing local charities and of course photography. Can you tell me a little about your education, childhood passions, early exposure to photography and vocation? My passion for photography has traveled a circuitous route. Growing up, my mother's brownie and my father's 8mm movie more →

Endframe – “On Being Aware of Nature” by Mario Giacomelli

It can be of no surprise that Mario Giacomelli is generally regarded as one of Italy's greatest photographers. Born in 1925 he took his first photographs at 25 and won a national photography competition a year later. From then on he moved from subject to subject - a hospice, an abattoir, trainee Catholic priests playing in the snow - and, of course, his landscape. My chosen image is from a series that he worked on from 1977 more →