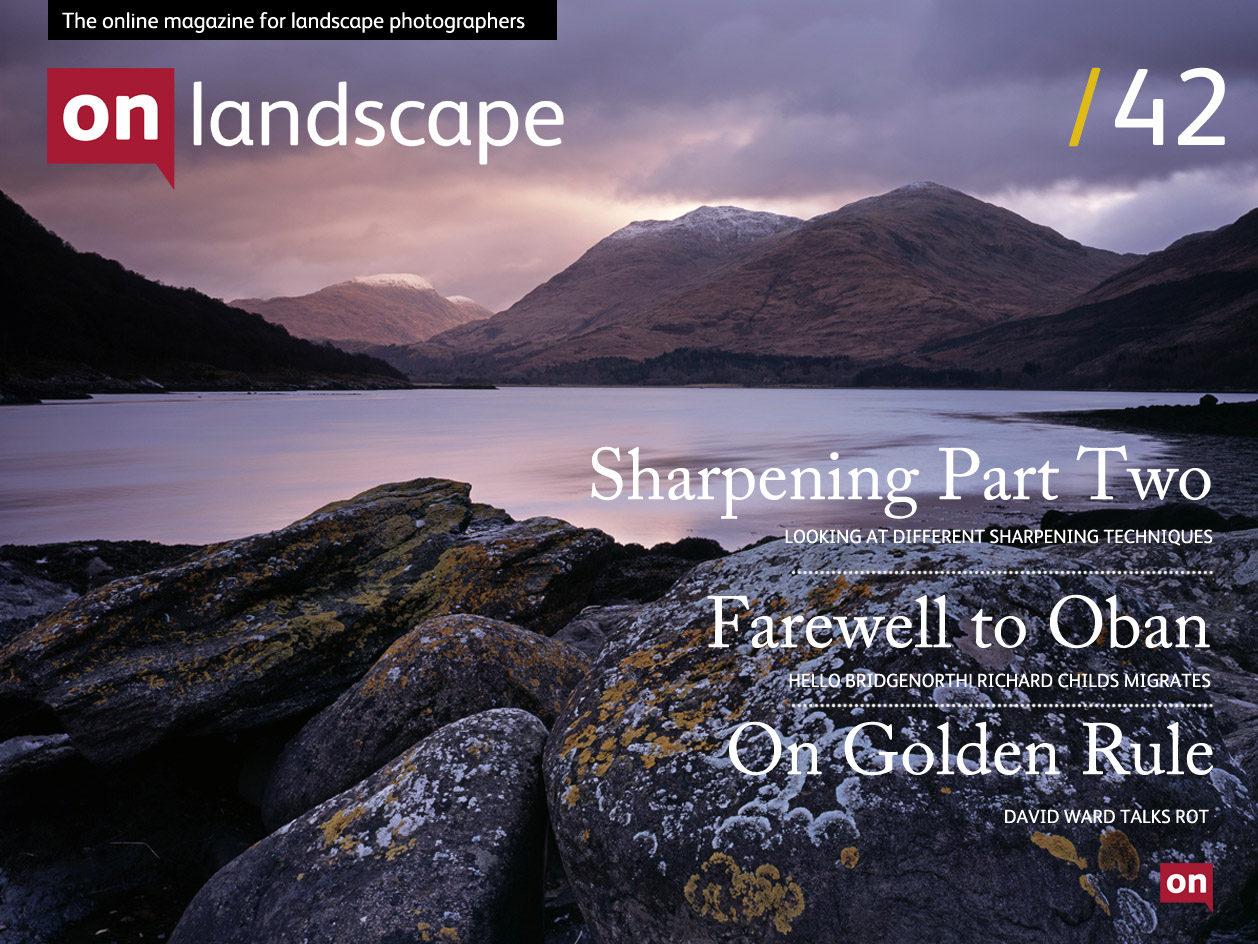 Adventures of a Landscape Photographer – Part 2

A conclusion to a trip report from the Hebrides

More explanation of how to use sharpening

Farewell to Oban, Welcome to Bridgnorth

Velvia – The End of a Legend?

Tim Parkin rues the demise of a classic

Photography and the World of Books – a Talk by Joe Cornish

Adventures of a Landscape Photographer – Part 2

As you will know from Part 1 in the last but one issue, I spent over a week on Skye and Harris in the Outer Hebrides building up some stock landscape images in May of this year. Having travelled from Skye to Harris, I was enjoying the wonderful beaches with mountain backdrops around Seilebost and the Luskentyre Bay area. During my time on Harris, I experienced all four seasons, often within a very short period of time, including more →

In my second article on sharpening I’ll steer away from the theoretical and move onto the practical. Ignoring the ‘magic’ of deconvolution sharpening and the legacy of unsharp masking for a moment, lets have a think about what sharpening can actually do to make an image look sharper. Well, as you saw from the last article, the sharpening effects look for ‘edges’, either lines or spots/dots, and add a little bit of extra lightness on the light side of the more →

Farewell to Oban, Welcome to Bridgnorth

Old Police Station, Bridgnorth So, we've finally made our move back South across the border and down into Shropshire. Of course it was not without pain, both physical (try lifting an Epson 9880 printer up a tight staircase) and emotional. In the final weeks before the big day i felt increasingly as though i was making a huge mistake, never more so than when more →

I was browsing through a few lens reviews in a couple of print magazines I receive and I noticed something a bit strange. Now most of us have the received wisdom that diffraction affects every lens and you can't do anything about it, f/22 must be avoided at all costs. Well, the results I was looking at showed a camera getting better resolution figures for f/22 than another camera at f/8 when both of the lenses were the manufacturer's more →

The great American landscape photographer Ansel Adams wrote, "A good photograph is knowing where to stand." Well, not the most specific tip on composition that I’ve ever come across! For artists of all kinds, mastering the problems of composition seems at once fundamental and tantalisingly out of reach. Little surprise, then, that there is a strong urge to codify composition, to provide not only practical instruction but also, in some cases, a theoretical basis to underpin this. The basic more →

Velvia – The End of a Legend?

It's no secret that we're an equal opportunity magazine as far as film and digital are concerned, so when a few days ago Fujifilm UK issued a press release that declared Velvia 100F would be discontinued completely and Velvia 50 would also be discontinued in sheet film form we couldn't help but be <understatement>a little sad</understatement>. The press release stated that more →

Photography and the World of Books – a Talk by Joe Cornish

Joe Cornish spoke of his early influences including Ansel Adams, Edward Weston and John Blakemore, important for their photography and their way of thinking. more →

Mark Banks works with Joe Cornish helping to deliver workshops and post processing tuition out of the North Allerton gallery. In most photographers lives there are 'epiphanic’ moments where things become clear, or new directions are formed. What were your two main moments and how did they change your photography? My first epiphany was when I purchased my first DSLR - A Nikon D70. I was determined to use it properly and to understand what all the different controls did on more →

Last issue we visited Chris Ireland's "Universal Lens Calibration" tool that allows one to take a 'white wall' shot and then use this to remove dust, fix vignetting and also remove any colour shifts caused by wide angle lenses and digital sensors (oh and also to remove the effect of a graduated filter or just it's colour cast). In practise we didn't see too much colour cast apart from the the 12mm end of my 12-24mm lens which more →