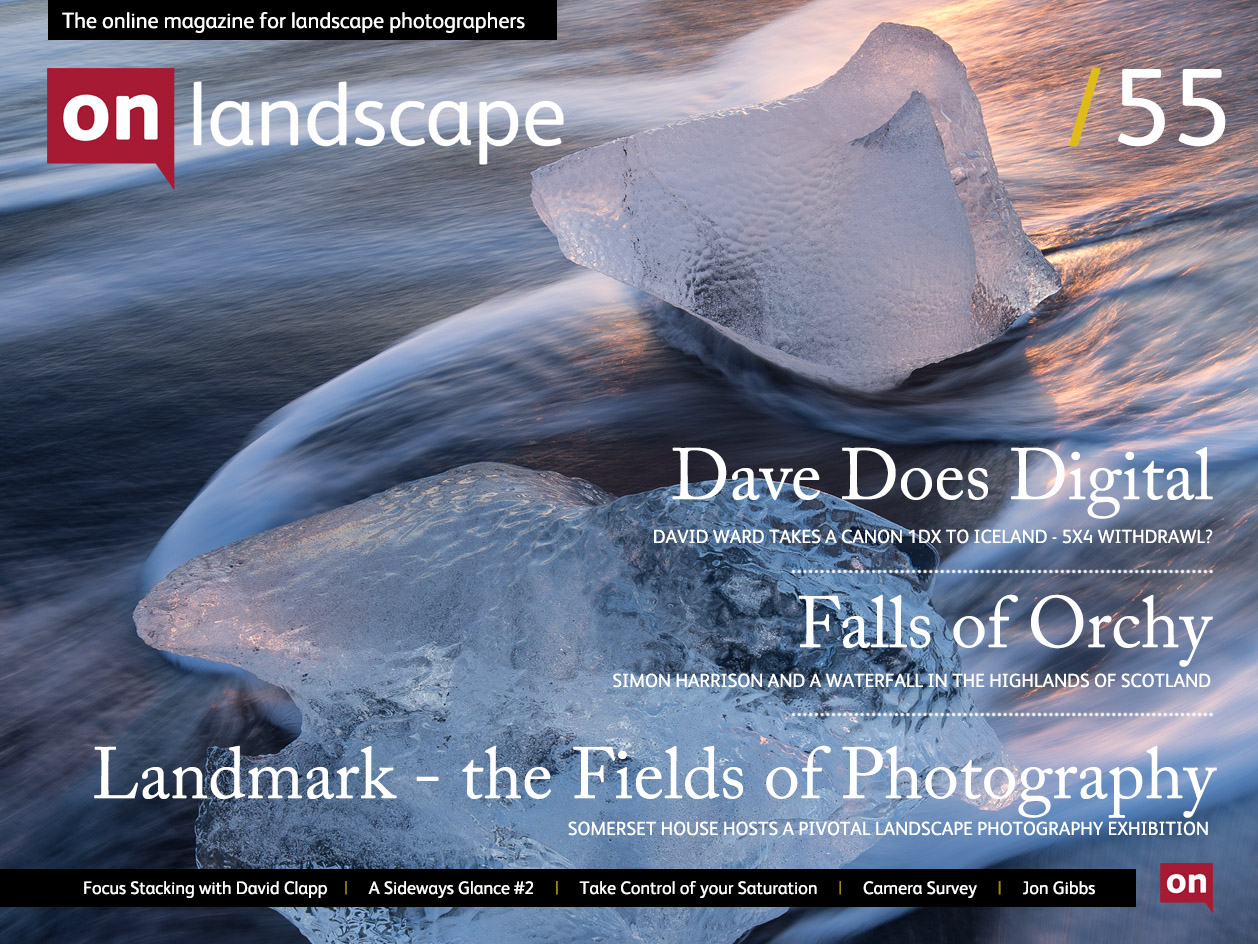 THE ART OF GETTING OUT THERE

From 5x4 to 1DX via Iceland

The Art of Looming

Stacks of Aurora with David Clapp

Take Control of your Saturation

Advanced use of Hue/Saturation Adjustments

On Landscape (the pet name for our esteemed editor) has been incredibly busy these last few weeks. A trip to Iceland with Joe Cornish and Antony Spencer for Phase One was incredibly rewarding but unfortunately totally under the radar for commercial reasons. Fortunately the embargo has been lifted and you can see the results of our video work in Phase One's promotional video for their new IQ260 back on You Tube now. A longer video is hopefully out in the near future and we'll be writing our own review of the trip in the next issue.

We also spent four days on the Linhofstudio stand promoting On Landscape and acting as 'technical expert' alongside Joe Cornish and David Ward. We were hoping to interview a few folk at Focus but the noise and sheer volume of people put paid to this. We did make some great connections for future interviews though and said hello to many On Landscape subscribers so thanks to all of you who visited.

And finally we made a trip down to Devon for some business planning, camera testing and general Dartmoor poking. A comparison of the Nikon D800 and now affordable Hasselblad H3D39 will appear in the next issue.

But to this issue! Not since Bob Dylan picked up the electric guitar has there been such strong winds of change. David Ward, self confessed 4x5'oholic has taken a Canon 1DX, the light sucking camera of choice for the well heeled digiphile, on a trip to Iceland. How did he get on? Will he sell the Linhof?

We're also reporting on the stunning landscape photography exhibition at Somerset House. "Landmark" includes over 150 photographs from some of the most important contemporary photographers working today and we have a photo by photo discussion with links to resources about each artist.

This and much more - and don't forget we've still to add a quick review of Focus on Imaging and our 4x4 Portfolios.

Finally - we have a one to one live chat with Joe Cornish and David Ward on Facebook on Tuesday the 16th of April so turn up with your questions ready. We have also put together an online survey asking about what cameras you use so please take part so that we can tailor our tutorials and reviews to your own tools.

That's it for now - thanks for your continued interest and support!

You can download the PDF by following the link below. The PDF can be viewed using Adobe Acrobat or by using an application such as Goodreader for the iPad. Click here to download issue 55 more →

Our new feature this issue is 4x4, a set of four mini portfolios each consisting of four images related in some way. If you would like to submit your own 4x4 portfolio please visit this page for submission information. Dave Kosiur Doug Chinnery Jim Robertson John Birch more →

Edward Burtynsky. Nickel Tailings no.34© Edward Burtynsky, courtesy Nicholas MetivierGallery, Toronto/Flowers London I had a meeting in London last week which ended at 2pm which gave me a few hours to wander off and do my own thing. Having added a news item to On Landscape about the “Landmark - the Fields of Photography” exhibition I thought it would more →

In the second part of my review of the Landmark exhibition at Somerset House I'll be looking at the final set of images exhibited. DATUM Landsat 7 Satellite Tassili N'Ajjer National Park, Sahara Desert, 2000 - An assumption or premise from which inferences may be drawn - A piece of information; fact #1 The more →

The big question is, I guess, will I be swapping to a DSLR and T/S lenses. The short answer is not entirely. But I may well be tempted to shoot certain subjects more →

The Art of Looming

If you’ve looked at the work of large format photographers such as Joe Cornish, David Ward, David Muench, etc. You may have read of a visual effect called ‘looming’ or at least seen pictures where small features appear incredibly large in the foreground. The technique involved is most commonly known through the use of rear tilt on a large format camera and this article hopes to explain what is actually happening when rear tilt is used and also how to more →

Can you tell me a little about your education, childhood passions, early exposure to photography and vocation? It’s safe to say I wasn’t a big fan of school and didn’t work hard at all so probably best to move on from there! The most enjoyable periods were the school holidays, especially the summertime break which seemed to go on forever. Unlike so many children today more →

Stacks of Aurora with David Clapp

After David Clapp's recent wonderful article on Iceland where we saw some stunning aurora images and some novel locations we asked if he could show us his focus stacking technique used on the 'shooting star' aurora shot. Well when we were in Dorset last week David us invited us into his lair and showed us how.                         Oh - and go an visit David's website..  ;-) more →

Rather than the highly directed activity that traditional landscape photography can often be, it is a more random process, often undertaken in the spirit of exploration. more →

Take Control of your Saturation

If you take a look at the popular photography press you’ll see that the saturation slider is probably one of the most used post production tools and also perhaps one of the most abused. more →

Eddies In the highlands of Scotland, near the bleak moorland of Rannoch, the river Orchy begins its journey high in the munros of the Black Mount and winds it way down through Loch Tulla into Glen Orchy. It meanders through this valley overlooked on both sides by hills of dense pine, but itself lined by fine oaks which creak complainingly in the funnelled winds. Several winding miles more →

Somerset House has, in the last few years, established itself as a premier exhibition space for international photography. Whilst it would perhaps be unfair to describe it as populist, it certainly trends to more accessible imagery than the more contemporary fare on the opposite bank of the Thames. Holding the annual Sony World Photo Expo, as well as recently "Cartier-Bresson in colour", the exhibition space is pleasingly traditional, set in reasonable size rooms with good light, than conveys a more →

Please complete our camera survey to make sure our tutorials and reviews are tailored to your equipment. more →