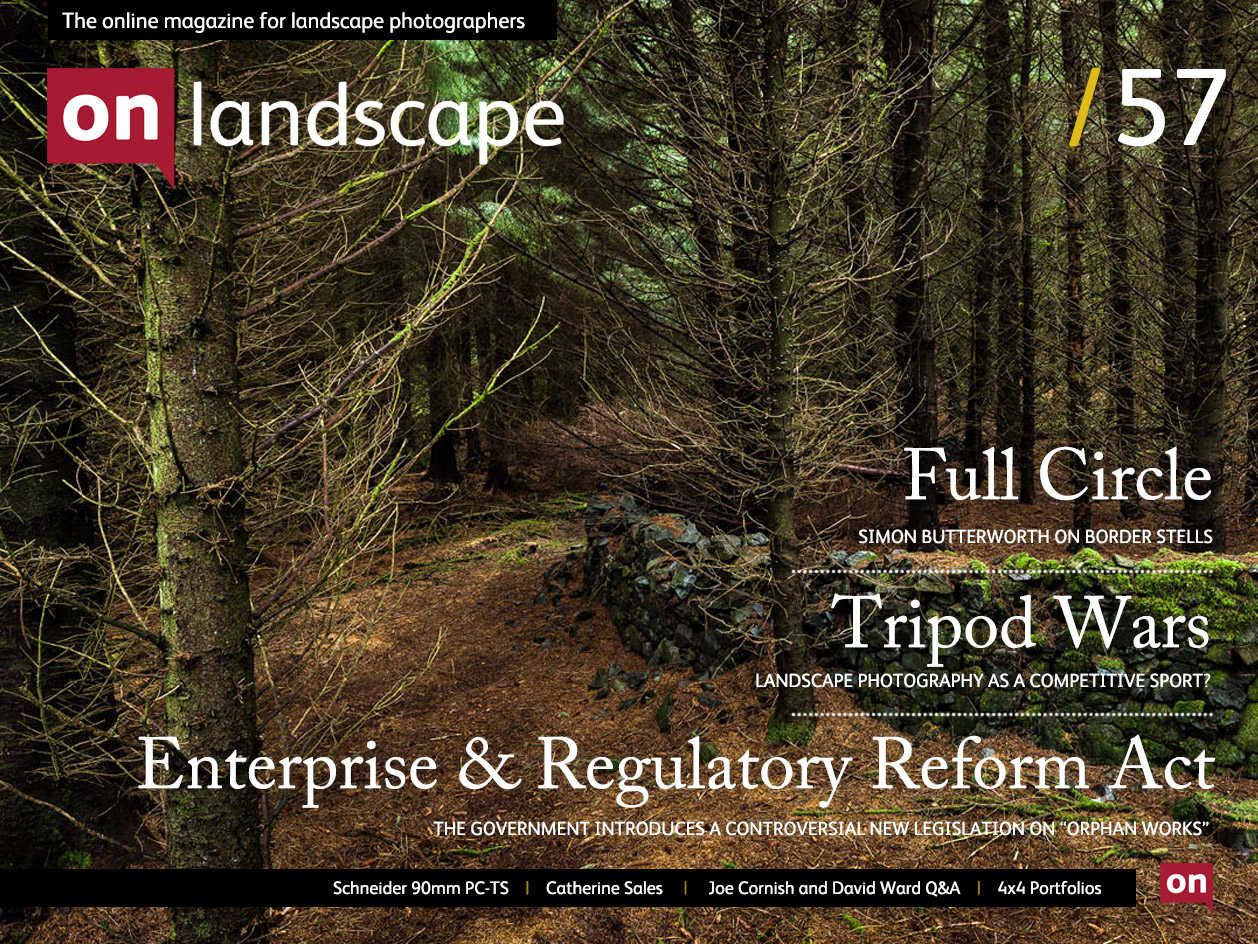 What does Sensor Size Affect

with Joe Cornish and David Ward

Every now and again there is a furor about some legislation or other and the government says "Calm down! calm down!" and the internet goes "End of the world!". The truth is usually somewhere in the middle but finding that middle isn't the easiest thing. This particular time the legislation is about 'Orphan Works' and we had a dig into the facts and wrote a small article about it. Whatever the eventual truth it's a definite that it needs your support to help make it more photographer friendly so have a look at the article and, if you can, sign the petition.

Our editor (me) has also just come back from helping to judge the Wildlife Photographer of the Year awards at the Natural History Museum. Having been struck by the quality of the wildlife and landscape images (more the former) it has also raised a few questions about the pursuit of 'hero' images and the way that these are perceived in the press and by the 'common man' (or woman, etc). We'll be writing an article about the competition and such images in a future issue.

In the meantime, it's entry time for the Landscape Photographer of the Year competition (by the 4th July) and although I've been a vocal critic of the competition in the past, there are a few changes this year including two landscape photographers in the first round (myself and Pete Bridgwood) as well as Trevor Parr. The second round is judged by Antony Spencer, Charlie Waite and Robin Bernard (director of the printing company Bayeux) and the final round will include Charlie Waite and Colin Prior and hopefully another landscape photographer or two. I'll also be in charge of technical adjudication. We hope these changes can only improve the competition's reputation amongst the landscape photographer community and we all look forward to the results.

You can download the PDF by following the link below. The PDF can be viewed using Adobe Acrobat or by using an application such as Goodreader for the iPad. Click here to download issue 57 more →

Our 4x4 portfolio is open to anyone to enter, all you need to do is choose four photographs, preferably related in some way. If you would like to submit your own 4x4 portfolio please visit this page for submission information. Robin Hudson David Mantripp Andrew Smith Vanda Ralevska more →

There is a prevailing sense that Iceland has been 'over-exposed' in recent months and I may well have been guilty of jumping on that particular bandwagon when I booked a workshop there at the end of February (led by David Ward and local Icelandic photographer, Daniel Bergmann). But I'm not going to apologise! It was my first visit to Iceland and after the first three days of depressingly incessant drizzle and grey mist (at around 6 degrees it was unseasonably more →

The spring has somehow been avoiding us this year. The gloomy weather has been haunting us for a few months now. So I have made the most out of those few days of sunshine that we have had so far and tried to capture the essence of the spring before it is all over... more →

These four photos, taken at different times, and different, but similar, places in Svalbard, Iceland and Antarctica bring to me the idea of a departure to an unknown, unseen destination. I also find in them the idea of a temporary haven, a brief respite from the storm. They're also all taken in areas of quite spectacular landscape, but which I've turned my back to, at least for a while. And of course they share a common format. There was more →

I often find myself when I'm reviewing images saying things like "you know, that looks a bit like ...." I'm sure that I'm not unique in this and, in my case, it probably betrays a life-long frustration at my inability to paint anything other than a skirting board. However, these four images (amongst many others) struck me as being reminiscent of the work of some of the artists near to my heart, in this case Bonnard, Monet, Klimt and Kandisnky. I would more →

What does Sensor Size Affect

We've done a fair bit of camera comparing in On Landscape and one of the things that causes a lot of confusion is how to work out equivalent focal lengths, depth of field, apertures and exposure is the part that sensor size plays in the equation. more →

The only other regions where I have seen circular folds are Perthshire, Sutherland and what appears to be a suspiciously stell-like structure on St Kilda. more →

The intent of many landscape photographers is to make an image of somewhere extraordinary; mine is to reveal the extraordinary in seemingly mundane wild places. more →

Schneider are currently the only company to offer a ‘universal’ set of tilt shift lenses - at this point they have a 50mm and 90mm plus there will be a 28mm released soon. more →

On 16th April 2013 David Ward and Joe Cornish answered readers question Iive on Facebook. Read the questions and answers in this article. more →

The government in its infinite wisdom have recently applied for and receive royal assent for the "Enterprise and Regulatory Reform Act" which amongst other things has a couple of items that have a significant impact for photographers. The first is related to large rights collecting organisations e.g. the copyright equivalent to the PRS society. These may have an impact but for this article we'll be skipping past them. The more →

Can you tell me a little about your education, childhood passions, early exposure to photography and vocation? I have always enjoyed photography especially at a young age on holiday using my compact camera to take photos of anything that inspired me. It never occurred to me that I could have it as a career until much later on. I have always been passionate about art, mostly drawing and painting and more →