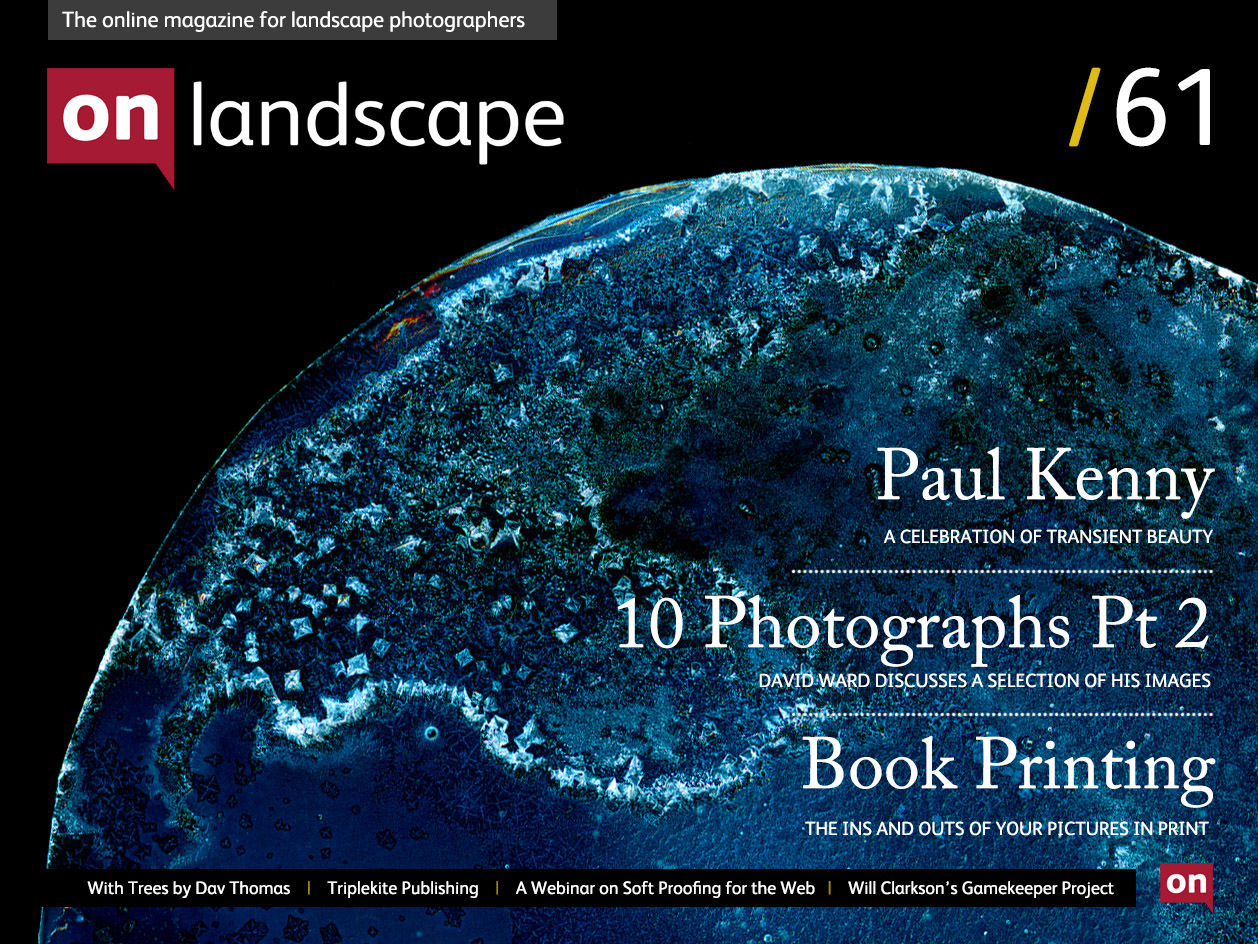 A Celebration of Transient Beauty

A Look at Lithographic Screening

On Landscape has featured Dav Thomas as a writer and photographer a few times in the past couple of years and when we heard he was publishing a book we eagerly awaited the opportunity to review it. Well the book arrived about a week ago and it's everything we expected. This issue we not only review the book but look into some detail as to why it looks so good and also talk with Triplekite publishing, an independent book publisher for whom Dav's book is a first project.

The second part to David Ward's discussion of a range of his photographs is included and at the start of the week we also undertook our first webinar - originally for 16 participants we ended up with 127 people booking and it went very well indeed with some excellent questions and feedback. We recorded the video an include both it and some expanded answers to a couple of questions.

We're also proud to feature an artist who works on the edge of the definition of photography and landscape. Paul Kenny uses parts of the landscape as elements of his still life creations, eventually scanning the construction to create a final photographic piece. The results are exquisite and unique prints that possibly defy classification.

We have also interviewed Will Clarkson about his project about gamekeepers in Scotland, taking up the story of the much maligned protector of the landscape. Finally Marc Elliott is our regular featured photographer - some beautiful coastal landscapes.

That's it for this week - I'm just about to head down to the Master's of Vision exhibition showing Joe Cornish, Dav Thomas, David Baker, Antony Spencer, Jonathan Horrocks, Pete Bridgwood, Chris Upton and Steve Watkins. If you're going, don't forget to say hello!

You can download the PDF by following the link below. The PDF can be viewed using Adobe Acrobat or by using an application such as Goodreader for the iPad. Click here to download issue 61 more →

Paul Kenny is an artist who works with the landscape and uses photographic processes to create his work. more →

We're continuing with the second part of our interview with David Ward Virgin River T: This is an older picture. D: Yeah. Quite an old picture really. Virgin river reflections. Probably the first reflection photograph or water flow photograph, that I was pleased with and I think it would have been 2000, or something like that. Quite a long time ago. First time I’d been to Zion. I was more →

We’ve included Dav Thomas’ book in this issue and one of our comments about it was how good we thought the print quality was. What do we actually mean by this? Well there are various aspects that make up the quality of printing in a book but one of the biggest influences is the way that the photographs are converted into plates for the lithographic print process. We’ve all seen newspaper print, especially black and white newspapers, where you can more →

Firstly we’d like to give a big thank you to both our presenters and panelists, David Clapp, Tim Parkin and Neil Barstow and also everyone who signed up for the webinar - we initially advertised it as for 16 people but in the end we have over a hundred registrations and in the end eighty four people turned up. We recorded the but skipped the introductions - we’ll include them next time - but the one thing that wasn’t recorded more →

Ok, I’ll admit in advance that I’m a bit biased when it comes to Dav Thomas’ first book “With Trees”. Dav has become a good friend since we both started shooting large format at the same time back in 2007 and since then we’ve lead workshops together and gone on a few, usually quite wet, photography trips. Over that time our ideas about photography have developed and whilst I was more →

We have recently seen the release of an inaugural book from large format photographer Dav Thomas - "With Trees" reviewed elsewhere in this issue. Dav is a friend of On Landscape, having written a few articles in the past, and also a friend of the editor, Tim Parkin. Dav mentions that he was cajoled into the book by the twitter community and credits David Breen, his publisher, as being the enabler of the book and Director of Triplekite Publishing. We more →

Will Clarkson "Game" project takes a contrary point of view to many purist landscape artists work who concentrate on the knee-jerk environmental point of view and presents the story of the gamekeeper, the oft maligned arch enemy of wildlife and landscape lover. We had a chance to put a few questions to Will about this alternative approach. Can you give a bit of background about your introduction to photography and more →

Can you tell me a little about your education, childhood passions, early exposure to photography and vocation? My education was somewhat random, my attendance was sporadic. At the age of 14 I had this wonderful notion that I was going to be the world’s best rock climber subsequently, I spent most of my school days climbing in the local quarries. I left school with few qualifications. I returned to education, more →