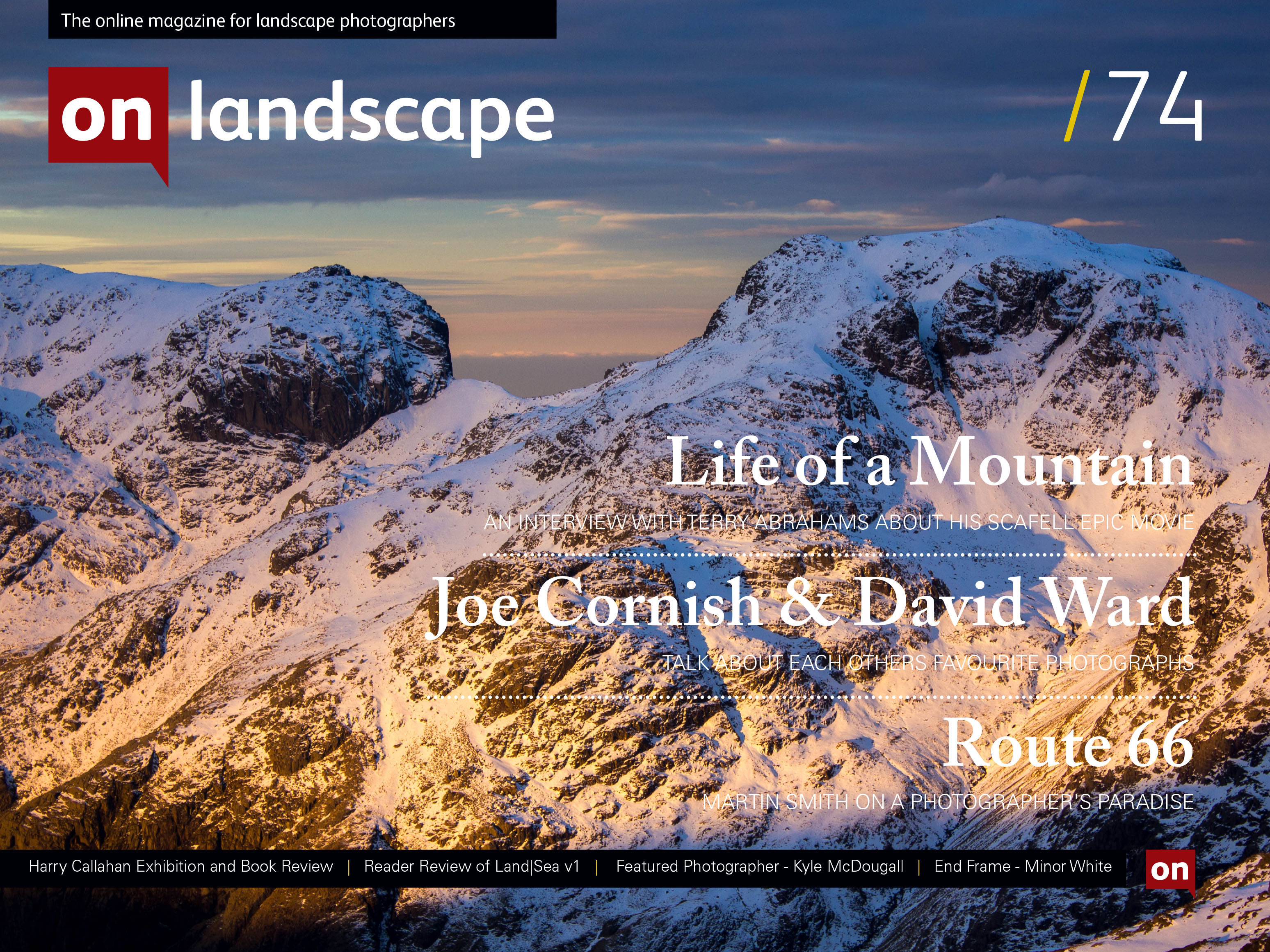 Author of a video on Scafell Pike in the Lake District

An Exhibition at the Tate Modern, London

The start of 2014 has seen quite a few changes behind the scenes at On Landscape. More planning is going into each issue and as you have probably noticed we're planning our conference and have also started a collaboration with a publisher to produce a series of books. We plan to make a few changes to the content of the magazine too but to do so we'd like your help letting us know what you'd like to see more or less of so in the next issue we'll be running a survey to try to find out where we're going right and where you think we could improve things. However, just as there are known unknowns there are also unknown unknowns so if you have any ideas that you think we should consider that we haven't looked at before or aren't obvious we'd like to know so please send an email to us at ideas@onlandscape.co.uk and as long as it's not insane we'll raise a query about it in our survey.

In the meantime we're trying out a couple of new ideas in this issue. Firstly we ran a webinar recently where we asked David Ward and Joe Cornish to choose a few photographs from each others portfolio and to discuss them with each other. We really enjoyed the session and judging by the feedback so did you so we've included a transcription here. Another new feature that we're going to run regularly is our 'Endframe' where we ask a photographer to choose one of their favourite images, either historical or contemporary by a famous or unknown, and let us know more about it and why they like it. Joe Wright has chosen Minor White as the subject of the first column with one of his more esoteric compositions.

On Landscape are also helping the Rheged in Penrith to put on a show of a few images, a talk and a workshop to support the premiere of a film about Scafell Pike. It's called "Life of a Mountain" and we've interviewed it's creator Terry Abraham in this issue. You can find out more about the event at the Rheged website including the workshop on Ullswater Steamers with Mark Littlejohn, a talk by David and Angie Unsworth and a small exhibition of landscape photography including photographs by Colin Bell, Mark Littlejohn, David and Angie Unsworth, Tony Simpkins, Roy Fleming and Terry Abraham. The Rheged are also offering the opportunity for people to exhibit their own work for which a booking form is available.

We also have our regular featured photographer section, this time from Canada with Kyle McDougall and a photo feature on Route 66 by workshop leader Martin Smith. Oh and if you're in London you could do worse than take a look at an exhibition of Harry Callahan's work at the Tate Modern - a review of this and of a recent book are also in this issue.

Finally we've asked one of our readers to review our Land|Sea book - take a look and then please consider buying a copy. It's a labour of love (in other words we don't make much money out of it) and we want to continue representing some of our best contributors in print.

You can download the PDF by following the link below. The PDF can be viewed using Adobe Acrobat or by using an application such as Goodreader for the iPad. Click here to download issue 74 more →

On Landscape have helped the Rheged to put on an exhibition of Lake District photographers and also a talk by David and Angie Unsworth and a workshop by Mark Littlejohn to coincide with the launch of Terry Abraham's movie "Life of a Mountain", a full feature about Scafell. We talked to Terry about his project and asked him how he the whole thing started. Tim: We’ll start off asking you a bit about your background as a photographer film maker.  more →

Last week we ran a webinar with David Ward and Joe Cornish where each photographer chose three of their colleagues images to discuss. The video is now available on You Tube but we've transcribed the content and included the images at higher resolution here. https://www.youtube.com/watch?v=fzTMr1JClrU Tim: Hello and welcome to ‘On Landscape’ and we’re here with Joe Cornish and David Ward. David/Joe: Good evening. Tim: And we are doing something fairly new in a way. Normally we’re critiquing other people’s work but you’re more →

"I know what you're thinking: 'Did he use two sheets of film or only one?' Well, to tell you the truth, in all this excitement I've kinda lost track myself. But being as this is a Deardorff 8x10, the most powerful camera in the world, and would blow your D800E clean away, you've got to ask yourself one question: 'Do I feel lucky?' Well, do you, punk?" - filed under "Things Harry Callahan might not have said" more →

editor - Obviously we love Land|Sea but we wanted to put it in the hands of our prospective audience and ask them to give an honest opinion. Paul Arthur fit the bill for a colleague who is always brutally honest (thanks for all those occasions Paul - I think) In the middle months of 2013 I heard rumour of a new book about to break onto the scene, written by a friend I had made very early on in my more →

Route 66, The Mother Road. Taking in eight states, the route once  epitomised the American dream. In the forties and fifties it’s travellers would journey from Chicago in the east to Los Angles in the west. The reason for the journey was the journey itself. The image of Route 66 was its cars, hotels, diners, gas stations and the people that made the experience remarkable. Roll forward more than half a century and things are now very different. In the more →

This issue we're featuring Canadian photographer Kyle McDougall who has some beautiful imagery of Ontario and it's surroundings (and more!). If you could also tell us where you live and what you do for a living that would be great. I am a landscape photographer based out of the Muskoka region in Ontario, Canada. For a living I run my own business, which includes work as a cinematographer and editor more →

I must say, sitting at my desk at work completely absorbed in some unmemorable task, it was a welcome diversion to hear my mobile go ping and then see a message from Tim pop up on the screen. With the message saying ‘favourite image’, my concentration was immediately broken and interest piqued sufficiently to want to see what little morsel of information he was about to divulge. On this occasion though, not information about a great little book he more →