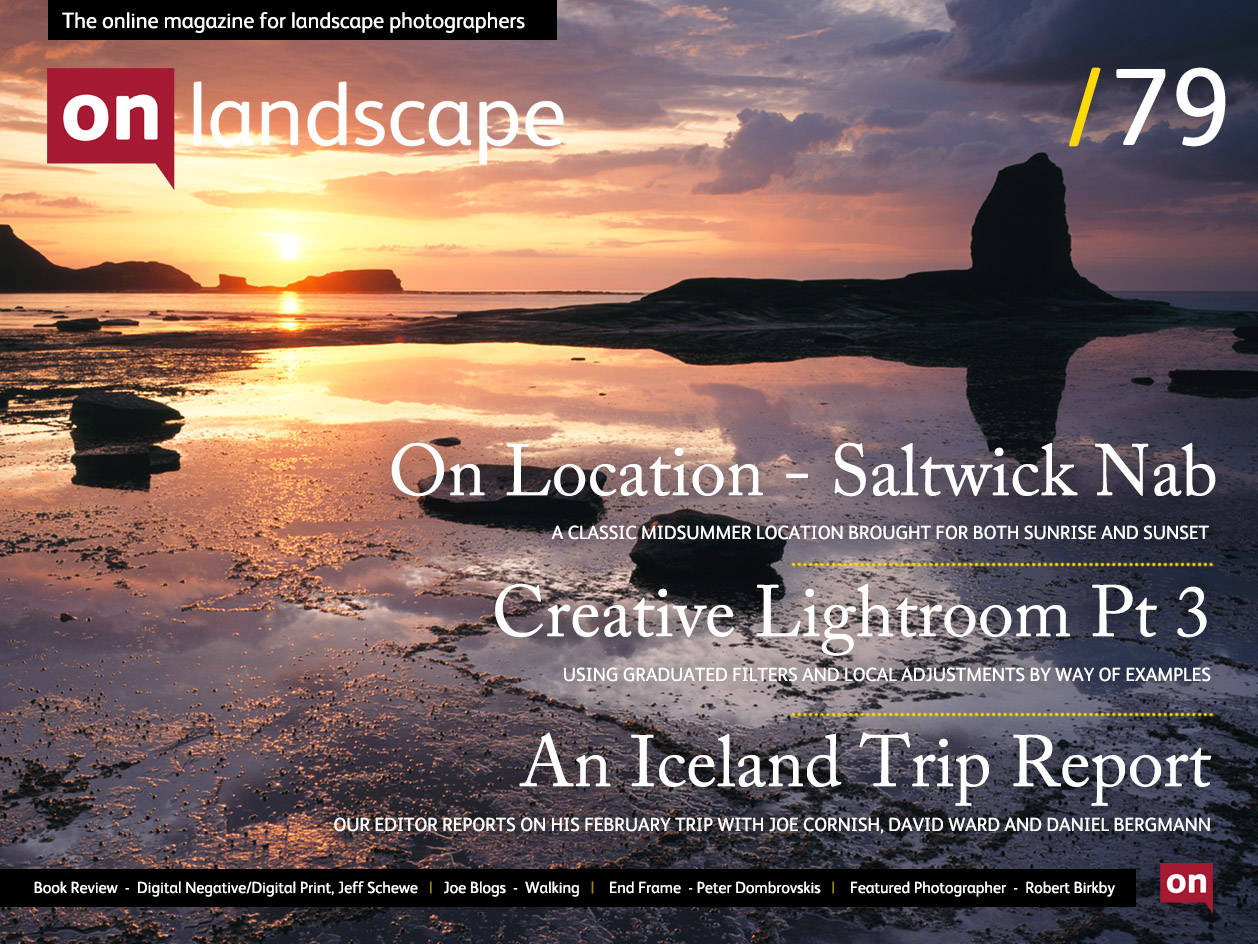 Or a nice evening at the seaside ruined..

Ansel Adams, only human after all..

Throwing away the colour

Pete Hyde chooses one of his favourite images

All change at the On Landscape offices! Our attempts to publish more articles on a regular basis has mostly succeeded and we’d like to thank the number of people who have commented on articles as they were published. We are including some of the best/most informative comments in the PDF. We think the excercise has been a success and we’ll be moving forward with the new regimen.

Dav Thomas is also wrangling with the PDF generation to convert it to InDesign and he seems to have done a great job – that’s my way of saying “It’s not me!” if anything is wrong – seriously though, if you have any comments about the changes please let us know.

One of the good things, in my opinion at least, is that I’ve actually been out taking photographs. Saltwick Bay has had multiple visits as part of creating the location guide (check out the 360 virtual tour) and also the photographer challenge (a litany of cock ups by all who took part). It only takes a couple of trips out with the camera to put everything in perspective and remind us why we do what we do. If you’ve got any ideas for places you’d like to see location guides please let us know.

Finally though – I’d like to thank all of our readers for bearing with us as we try to keep On Landscape developing. It doesn’t always go smoothly but we hope we keep you interested!

Don’t forget that although there are tickets available for the conference still, we are down to the last few tickets for the dinner on the Saturday night now! Subscribers get an extra discount so just get in touch with us at marketing@onlandscape.co.uk.

You can download the PDF by following the link below. The PDF can be viewed using Adobe Acrobat or by using an application such as Goodreader for the iPad. Click here to download issue 79 more →

In this issue’s Lightroom guide we took an introductory look at the adjustment brush and graduated filter brush. more →

After a bit of a lean period in terms of my own photography I’ve had the pleasure of going out every week for the last four weeks. Every one of those weeks has been to the same location but in many ways that has made it more interesting. Apologies for the delay in getting the latest issue complete as we have spent some time getting the 360 location guide working again (why do software developers insist on changing things!). more →

I think it’s fair to say that Iceland has become a bit of a cliche for photographers. No matter where you look online there seems to be someone returning with pictures of clear ice on black sand, moss covered boulders and, in winter at least, swathes of “green shit in the sky”. Even two years ago when I visited with Joe Cornish to shoot the promotional videos for Phase One (one, two and three) I felt more →

Around midsummer Joe Cornish, David Tolcher, Andrew Nadolski and I decided we'd set ourselves a little challenge to turn up at the same location with a bunch of cameras and see what happened. As David Tolcher has a house in Robin Hood Bay we chose Saltwick Nab as a great location as the sun sets off to sea in the North at this time of year (well - North West obviously but that's up the coast in these parts). Each more →

I've read a small amount about Ansel Adams over the last few years and he has always come across as the master technician of landscape photography. His teaching of the Zone System and his considered 5x4 and 10x8 work was an aspirational example of the master craftsman personified. So it was with a small amount of relief that I read an article about the making of "Moon and Half Dome, Yosemite" and discovered that he wasn't quite the perfectionist more →

“We don't make a photograph just with a camera, we bring to the act of photography all the books we have read, the movies we have seen, the music we have heard, the people we have loved.” - Ansel Adams In this memorable quote, Ansel Adams distills the idea that photography is truly an act of self expression. He urges us to apply our entire life experience, especially what we have learned from other art forms, and from our relationships, more →

At the moment if you want to use a dedicated black and white sensor you’ve got the choice of buying an old Kodak DCS camera (in a full 1.2mp or 6mp formats), buying a Leica Monochrom for £5k or a Phase One IQ Achromat for about £36k. Not many realistic options really. However there are rumours that Sony are looking at producing a monochrome version of one of their sensors as a dedicated lens RX1 which would (hopefully) bring more →

When Tim asked me if I would do an “End Frame” I didn’t realise quite how difficult it would be identifying which particular photograph I wanted to discuss. There are many photographers whose portfolios I admire and there are many more photographs within those collections which I could loosely describe as favourites .... so which one should I choose? I turned to my collection of photography books and began studying several familiar photographs. After a while I started to ask myself more →

I imagine most of you will have heard that we have a D800 replacement arriving very soon. If you haven’t, the bottom line for landscape photographers is Removed optical low pass filter (the old version still had one but supposedly it cancelled itself out - removing it completely may make things sharper) Included new sensor technology with possibly better noise handling Added a native 64 iso so you can get longer exposures for more blurry water or use wider apertures in daylight Finally a fix more →

This issue we're talking to semi-professional Yorkshire based photographer Robert Birkby. Can you tell me a little about your education, childhood passions, early exposure to photography and vocation? I was born in Halifax, West Yorkshire and educated in nearby Brighouse. My father is a retired cabinet maker and my mother a housewife. As a child I always had an interest in natural history and geography, so whilst other kids were playing more →