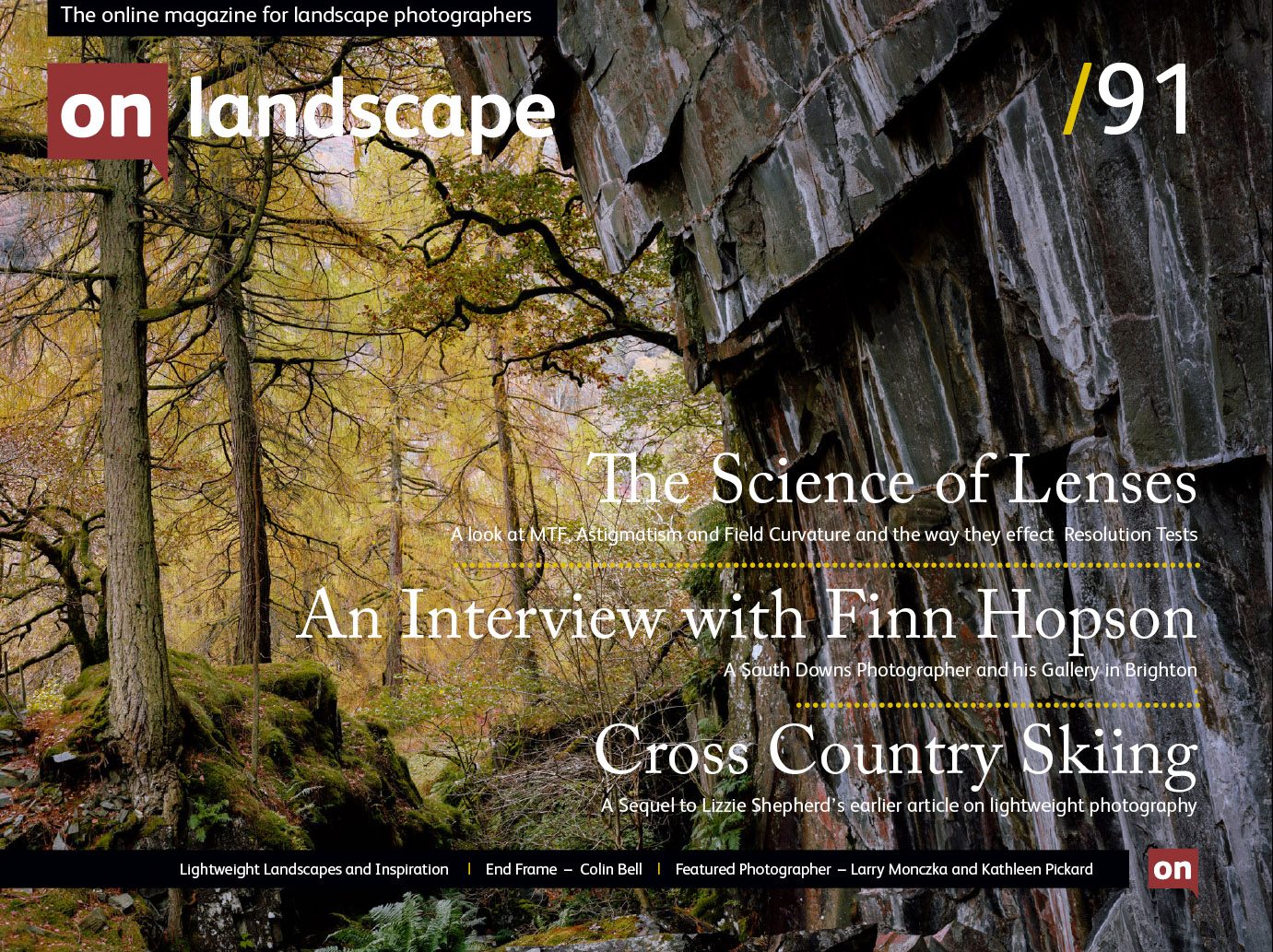 The Science of Lenses – Part Two

The Science of Lenses – Part One

MTF & How Resolution is Presented

Colin Bell Discusses one of his Favourite Images

How camera choice can inspire creativity

Cross Country Skiing in Arctic Sweden with the Fuji X-E2

Things have been a bit hectic in On Landscape central over the last couple of weeks. Iíve been a judge at two large photography competitions, the Wildlife Photographer of the Year and the Environmental Photographer of the Year and Iíve also been scanning the lith prints from Tim Rudman for his new book Iceland (which looks very interesting). Judging competitions is always enlightening and I come away every year realising that photographs have to have something extra special beyond aesthetics and wow to make them stand out.

I think most people who have thought about what they would like to do with their photography has at some point fantasised about having their work on permanent display somewhere. Or even owning their own gallery! However most people quickly realise the commitment and risk involved and get back on with their lives. Not Finn Hopson. In this issue we talk to him about his terrific little gallery in the arches on Brighton Beach and how he ended up their and his plans for the future.

We are also taking some of the topics that we covered in last issues livestreaming on lenses and expanding on the science behind them in a series of articles, the first two of which appear in this issue. Lenses will always be important to photographers and it's no surprise that they are becoming more so as megapixel counts rise.

We are also talking to a couple of photographers who really take their lightweight cameras seriously.

You can download the PDF by following the link below. The PDF can be viewed using Adobe Acrobat or by using an application such as Goodreader for the iPad. We've split the PDF into highest quality and small download versions now. The high quality is about 80mb and the small download version is about 20Mb. Click here to download issue 91 (high quality, 83Mb) Click here to download issue 91 (smaller download, 20Mb)     more →

The Science of Lenses – Part Two

Those Dotted Lines (Astigmatism) OK, we’re back to the dotted lines and these need a little more explanation as they’re quite complicated. I want to show you in a diagram what is happening as a verbal explanation is quite difficult. What I want to show is that for a single point source of light, there are two possible planes in which it can be in focus. Very odd and it took me a while to understand myself but with the more →

The Science of Lenses – Part One

We recently recorded a livestreamed webinar about lenses and although we went overtime by a considerable amount, the interest was very strong. As such we thought it a good idea to go into a little bit more about the science behind lenses without scaring people too much. Hopefully we’ll split the content into ‘easily digested’ with a few separate ‘geeky asides’ for those of you, like me, who like to know what is really going on. The first thing we’ll more →

In March, I spent a weekend in Sussex, meeting and talking with other photographers such as Valda Bailey (who has been a previous featured photographer) and David Higgs (who had an exhibition which was reviewed in a previous issue and whose interview will be in the next issue). Finn Hopson owns the Brighton Photography Gallery and has recently put on the exhibition 'Southbound', which I mentioned in the previous issue. I caught up with Finn early one Sunday morning more →

I came across their work last year and found it appealed on a number of levels.  They delight in finding the beauty in small things that are easily overlooked. more →

The customary introduction to an End Frame article is to write about how difficult it is to choose a single image that has been inspirational in one’s photographic development. I’ve read those introductions myself and thought: “come on, how hard can it be?” Turns out the answer to that is “very”! My task is maybe somewhat easier by the fact that I’m not a very well read photographer. By which I mean that I don’t have a vast knowledge of more →

Lightweight Landscapes – how camera choice can inspire creativity The second sentence of this article is the most important. I use a digital compact camera for all my landscape photography. You may or may not be surprised, but I find it very inspiring. A little bit of explanation is perhaps necessary, but that’s the basis for the collection of thoughts offered below. Some less important details: it is a Panasonic Lumix LX5, has a lovely Leica lens to which I can more →

Cross Country Skiing in Arctic Sweden with the Fuji X-E2

Last year I wrote about my experiences cross country skiing in Norway’s Rondane National Park using a Fujifilm compact camera system - at that time I was using the X-E1 and X-M1, with the 18-55mm and 55-200mm zoom lenses attached. A year on, I again found myself enjoying a fabulous few days skiing with my husband, Rob - this time in Abisko in Arctic Sweden. Abisko had long been on our radar because it is the start of the more →