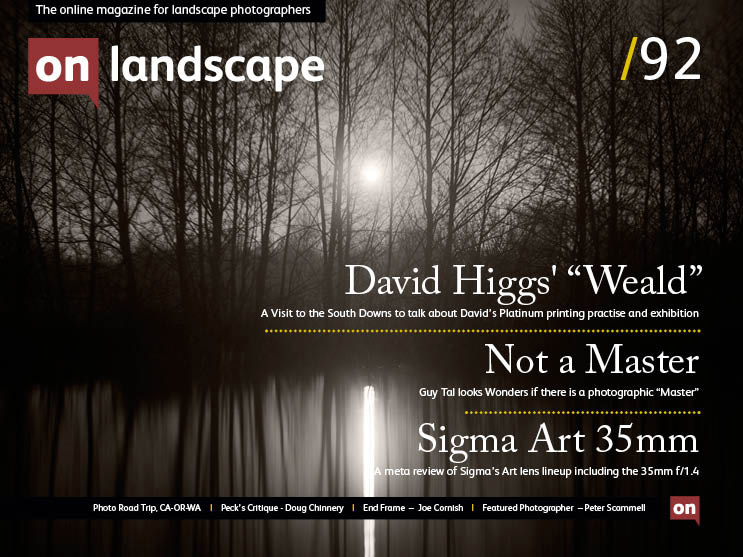 The Photographer’s Guide to …

The Lake District, The Peak District and the Yorkshire Dales

A Wash of Colour

A Journey into Platinum/Palladium

Pondering the "Artistic Master" in Photography

Joe Cornish chooses one of his favourite images

By the time you read this On Landscape will have moved offices - which by implication means that we will have moved house as well. The change in scenery is only minor, it’s 5 miles from our old house, but that means that the ‘back yard’ is completely new and I’m looking forward to making the most of it.

And I have a bunch of new equipment to try out in it too! Rob Cook from Canon has kindly arranged the loan of a Canon 5DS and separetely Paul Reynolds from Sigma has loaned me the whole of the Sigma ‘Art’ range of prime lenses; the 24, 35 and 50 f/1.4. The two of these together add up to a serious bit of equipment and I’ll be putting them through their paces for On Landscape in the coming weeks. However - it all starts this week by laying the groundwork with a review of the reviewers (often referred to as a meta review). I’ve analysed the online testing of the Sigma 35mm f/1.4 and summarised them into something a little more digestible. Along the way I have also critiqued the testing websites themselves. As I’ll be doing some testing myself in the future (not too much, don’t worry) I though it best to set a baseline.

Don’t worry though, there’s lots of photography in this issue too! From Guy Tal’s essay through Steve Gledhill’s US road trip and onto a chat with David Higgs about his wonderful platinum palladium work “Weald”.

And finally we also have a new feature from Thomas Peck, who wrote an essay on the sublime recently. He is discussing some inspirational landscape photographs and has started in this issue with a work by Doug Chinnery.

You can download the PDF by following the link below. The PDF can be viewed using Adobe Acrobat or by using an application such as Goodreader for the iPad. We've split the PDF into highest quality and small download versions now. The small download is still good enough quality for general browsing but you won't be able to zoom into the smaller images as much as with the larger. Click here to download issue 92 (high quality, 66Mb) more →

Atmospheric photographs of some of south London’s most beautiful parks, green spaces and natural areas are to go on display at the Horniman Museum and Gardens in Forest Hill. The Height of Summer Taken by London-based landscape photographer Max A Rush (who we featured in a previous issue -Brockwell Park -a year in Landscape Photographs), the collection entitled South London Landscapes is on display more →

The Photographer’s Guide to …

Location guides are funny things. The mainstream magazines include them in nearly every issue and they typically include a photo, a low resolution map and a short ‘story’ about the location which will usually include “I nearly left and then the clouds parted”, etc. Alternatively we have some of the in depth guides I have made in the past which include multiple 360 interactive views and maps and sample images. Both ends are useful but at the ‘short’ end more →

One of the things I was wary of when starting On Landscape was including too many reviews. There are so many reviews out there already that adding a few more ‘yeah this looks quite good, 92%’ posts wouldn’t really contribute a lot. However, I did get a lot of people asking for my opinion on various items, from cameras and lenses to tripods and raw converters and when I feel I’ve had something to add beyond what is already more →

Much photography is descriptive in a literal sense. Sharp lenses, high resolution cameras transcribe in great detail and clarity whatever subject the photographer choses. The viewer recognises instantly what is being shown; as a result interpretation is relatively simple. That is not the case with Doug Chinnery’s wonderful moody seascape view above. (Click here for other articles Doug Chinnery has written for On Landscape.) Here we have the opposite of the ‘straight shot’. The norms of photography have been subverted. more →

The following is a transcription of the screencast recorded after spending a day out with David wandering the Weald and waiting for the coated paper to dry for one of his platinum palladium prints. Tim Parkin: Hi, we’re here with David Higgs, just spent the day in Ashdown Forest David Higgs: Doing a lot of walking, chatting and not many taking pictures! That’s fine TP: Nothing wrong with that, just great being out seeing the world. Also looked at the exhibition, more →

Although he has always taken photographs, a move from London to Devon gave his photography new impetus. more →

We're re-introducing our blind critiques which we ran last year. This is where we'll be inviting photographers along to provide feedback on submitted photographs from our subscribers. Getting feedback on your photography is critical to your progression as a photographer. For most photographers this typically happens when they meet up with some friends on when they post images on Flickr more →

Our two-stage photography road trip had been planned since the autumn of 2013. Starting in San Francisco in early May 2014 a friend from California and I drove 1500 meandering miles to Seattle over a period of about 8 days taking in stretches of the coast, redwood forests, lakes and volcanoes - dormant, and not so. In Seattle we joined up with a group of friends for a 9 day trip around the Olympic Peninsula, the Columbia River Gorge more →

In my images I wish to impart something of my relationship with them, but not something entirely independent of them. more →

Once Upon a Time, before the internet and Amazon, there were bookshops that specialised in Photo books, and the best of these was Beyond Words in Edinburgh. Neil McIlwraith still runs Beyond Words as an excellent online service; nevertheless, it is hard not to feel a sense of loss for the sheer indulgent pleasure of browsing in a place devoted to the photographic image. On my last visit to (the analogue?) Beyond Words I acquired Edward Burtynsky’s book, more →