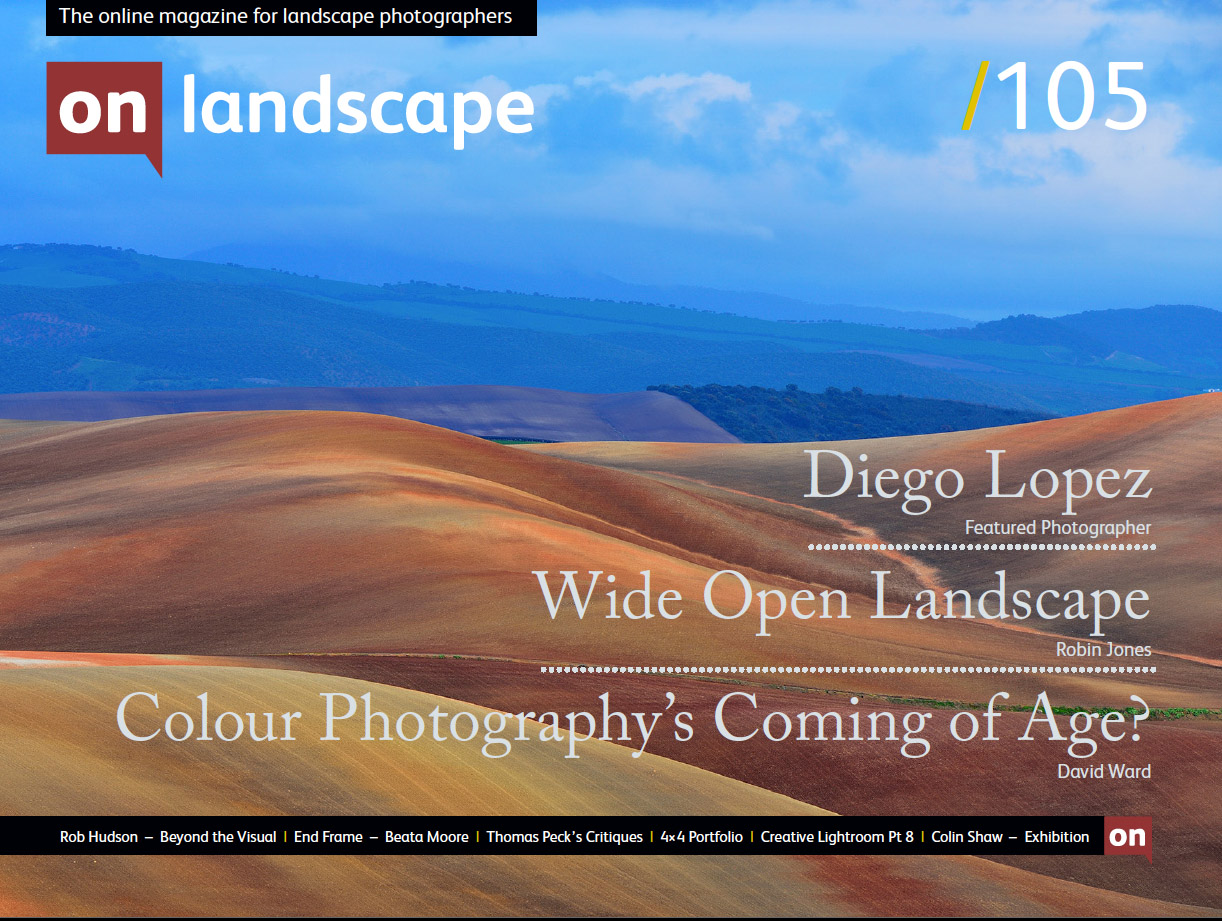 Finding the connection to the landscape

Beata Moore talks about one of her favourite images

An elemental battle in the landscape

A look at the history of colour photography and image manipulation

Beyond the Visual: Sound, Word and Landscape.

The New Year has arrived and if you’re in the UK you’ll be thankful that much of the miserable weather we’ve had over the last couple of months (rain, flooding, more rain, more flooding) seems to be ending with a predicted cold spell about to hit us. All of that miserable weather gave us lots of time for planning though and the main result of that is that we can announce our 2016 Meeting of Minds conference to be held at the Rheged in November. Our first announced speakers are Charles Cramer, John Blakemore, Simon Norfolk, Bruce Percy and Erin Brabnik. There’s a big discount for early purchasers so get in touch soon! We’ve also been planning the magazine for the next year and we’re very happy to announce that we have Joe Cornish, Guy Tal, Hans Strand and David Ward as regular writers.

This issue includes some work from a photographer who has been posting images occasionally on my Facebook stream and had to be coaxed into letting us publish some of his work. Robin Jones’ work is a beautiful example of the simplicity of photographic practise and I would love to hear of more personal stories about how our readers are developing their own practise so please get in touch and tell us about your work!

I’m currently in the middle of packing for a short trip up to Glencoe to make the most of the weather and we’ve hired a guide for a walk over the three sisters for a couple of days. I’ll be writing more about the trip and winter walking in the next issue so until then, have fun in the snow!

This issue includes some work from a photographer who has been posting images occasionally on my Facebook stream and had to be coaxed into letting us publish some of his work. more →

Robin Jones came to my attention with a series of photographs taken with an old Canon lens, nearly all wide open, and presented in a soft black and white look. The images stood out from my usual stream and as I had just started using a similar lens we got chatting a little - I was interested in finding out more and Robin was happy to help - Tim Parkin The Jones family settled in Cambridgeshire after my father decided more →

In 2013 I started photographing the quarries and works associated with mineral extraction and processing. What inspired me was the view from a local track. more →

It took me quite a while to decide which image I would like to write about in the End Frame, as there are so many images that influenced me in a significant way, and even more that are a pleasure to look at. more →

In this installment of our Lightroom videos we're looking at the new(ish) HDR module. We have an example of Joe Cornish and one from Tim Parkin. more →

Landscape photography is a slight misnomer, in that a large number of landscape photographs have as their subject not land but water. Or at least they take the interaction between water and land as a starting point for their imagery. more →

Sometimes an image pops up in your feed that stops you in your tracks. For me, this happened recently with an abstract by Spanish photographer Diego Lopez and judging by the reaction when I reshared it, the same was true for many others. more →

It’s almost 190 years since Nicéphore Niépce made the first light-fast photographic image. That image was monochrome but I’m not sure that modern photographers understand how recently colour photography became widespread or how radically things have improved in the last ten years. more →

Beyond the Visual: Sound, Word and Landscape.

I've long believed that for my work, seeing by itself is insufficient to create a good photograph. Whereas visual skills are essential, they are only a part of the contribution we can make as individuals or artists to our photography. The real skill of the visual is translating whatever it is we're trying to say into images; an extra level that might go some way to communicating our intent. Beyond seeing lies the murky, complex world of ideas, motivation, more →