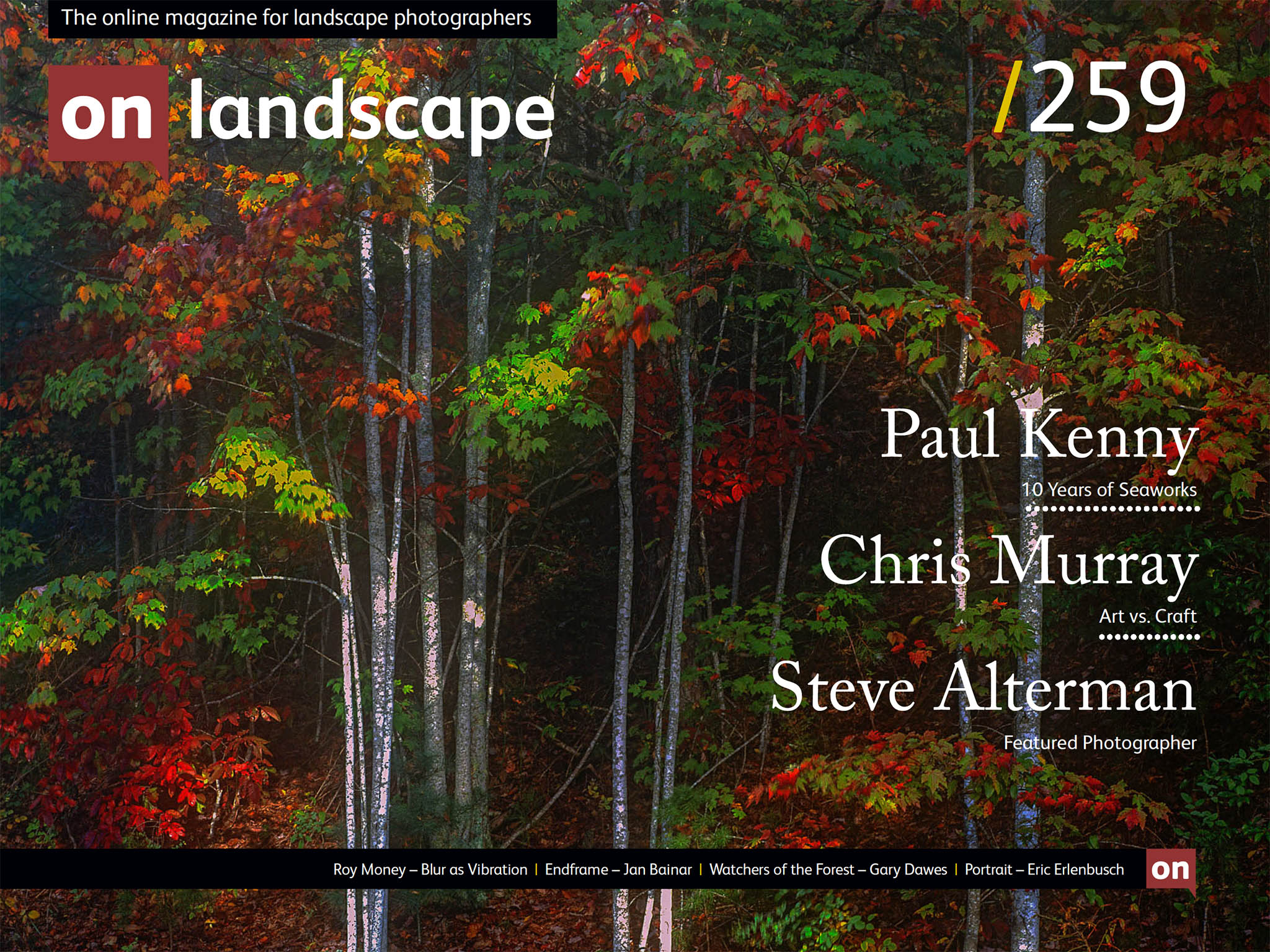 Jan Bainar chooses one of his favourite images

Watchers of the Forest

Eric Erlenbusch – Portrait of a Photographer

Using Experimentation and play to harness the chaos in nature

The achievement of undivided attention

Why should we care?

With England ‘suffering’ from heatwaves and Europe hitting record temperatures, the thought of another day out in the drizzle of the Highlands was more than we could handle, so it was into the car and off East to try and find some sunshine. And sunshine we found! We walked out of the back of the ski centre and into the wilderness that is the Cairngorm plateau. It’s surprising how much a day of sunshine improves the mood and by the end of the day we both had smiles permanently fixed.

Chris Murray’s article in this issue reminded me of our attempts to create a musical playlist for our nieces and nephew who will be visiting later this summer. We thought we’d be introducing them to some classic old bands but we were surprised that they were asking us if we knew AC/DC, Goo Goo Dolls, Kate Bush (thanks Stranger Things) and many more. It seems there isn’t a real differentiation between old classic and modern classic anymore. The top 10 rock albums of the moment surprisingly include Pink Floyd, Nirvana, Guns’n’Roses and Metallica (thanks again Stranger Things). I suppose the same is true in photography to a certain extent - a great photograph by David Ward, Jack Dykinga or Joe Cornish still stands strong against the top photographs we saw in last years Natural Landscape Awards. Despite the huge numbers of people taking photograph and making music compared with a few decades ago, the quality (and perhaps the number) of the very best songs and music hasn’t increased proportionally.

The photo was taken in 1966 on an analog Pentacon six with Flektogon 50mm f4 lens and it captures the hot slag dump from nearby ironworks Karolina. Even the city centre was used for heavy industry and coal mining at that time. more →

Watchers of the Forest

This time last year we were just receiving the first submissions for our Natural Landscape awards and one of those was from Steve Alterman. Later, after many rounds of judging and verifying images, his exquisite photograph of a pseudo mountain on a midnight black sandy beach won first place in the competition more →

Eric Erlenbusch – Portrait of a Photographer

I believe that this approach is central to Eric’s ability to “harness the chaos” in a pleasing way as it allows him to try many different ideas and approaches to making an image without the expectation that something good comes of it. more →

Several years ago, I made a conventional exposure of birch trees in the morning sunlight that seemed inadequate to convey the surprise of my encounter. Suddenly, I got an impulse to try again and move the camera during exposure. more →

Sticking with the music analogy, I have seen videos on Youtube of musicians performing song covers on their respective instruments. That these people are talented is without question, they hit all the right notes. But, that alone does not make them artists. more →

The exhibition is entitled ‘Ten Years of Seaworks’ and the pictures on display were made between 2008 to 2018. more →