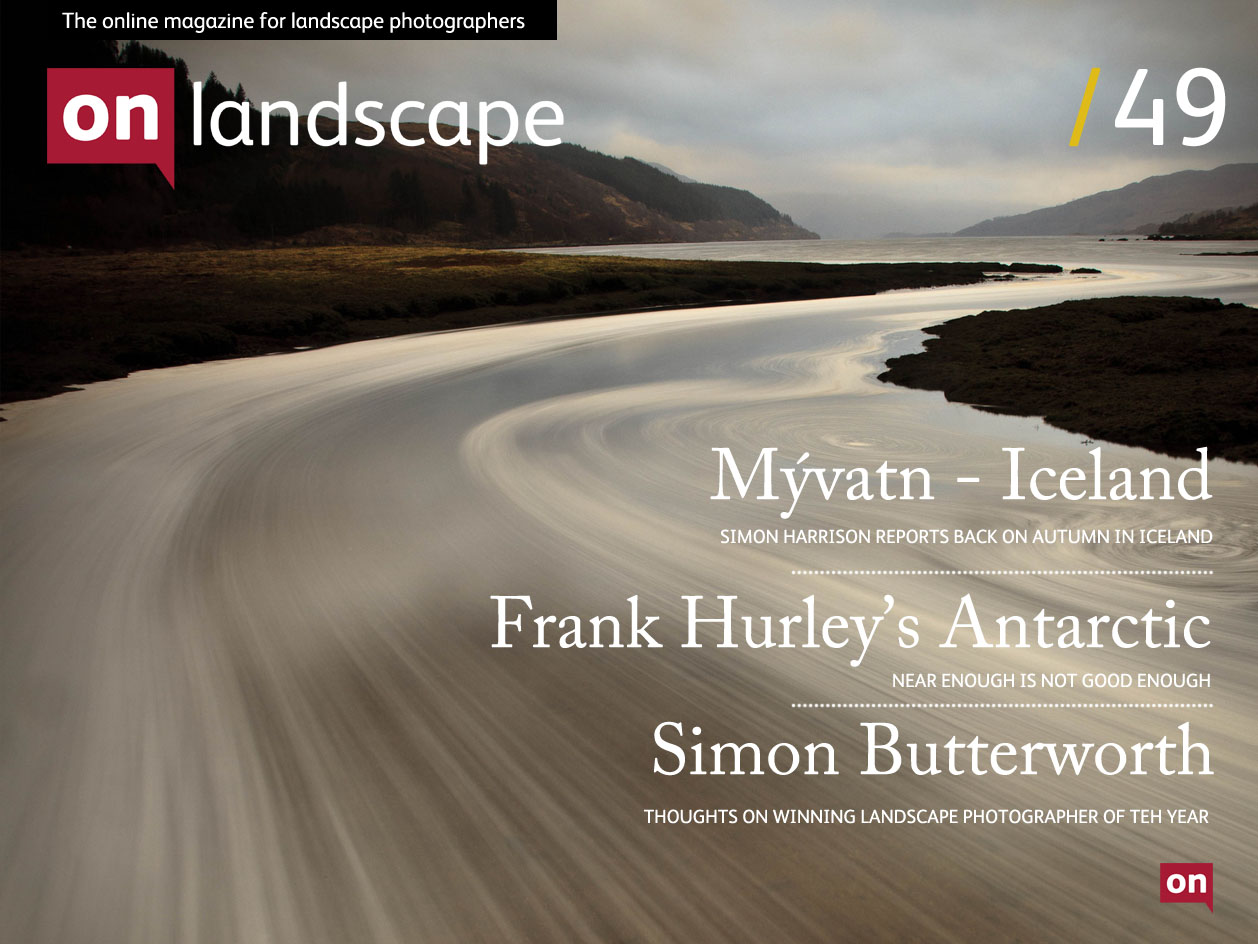 Canon in the Lakes

Near Enough is not Good Enough

“...his most important tool; not his camera but his eye”

Well I think we broke a comment record last issue with the discussion on photography competitions and manipulation. Hopefully it will prove useful to somebody in the future. We've also been adding news at a regular pace so don't forget to check the page regularly. Like we mentioned last issue, we've uploaded a few articles already but we've got a few more arriving over the next few days including an interview with David Clapp about his filming with Canon cameras in the Lake District and with Simon Butterworth about his surprise win in the Landscape Photographer of the Year competition.

We've also been working on the PDF version of the magazine and we have a preview of it for you to download with a few older articles for you to check out. We plan to start producing these for each issue in the new year. You can download the preview PDF by clicking here.

To give people a taste of our PDF we've made a compilation from some of the great content we've published over the last couple of years. You can download this issue by clicking on the image below. The sample of the pdf magazine has been formatted to work on an ipad (or any other device capable of reading a pdf). It will open in ibook but we recommend using an app like more →

We visited David Clapp a couple of weeks ago and spent a day wandering around the lakes. When we woke on the Sunday to some atrocious weather we decided it would be a good opportunity to interview David about his recent activities, the reasons for him being in the lakes and about what he'll be doing for On Landscape over the next year. First though a few pictures that are referenced in the video. In the middle of the video more →

Take a View winner - "Condemned" The following is an interview with Simon Butterworth recorded the weekend that he had heard about his win in the Take a View competition.  Well I had heard about the urban category that was a surprise in itself, that I was really chuffed about. I received an email whilst I was up in Perth photographing the autumn colours; so that was more →

Iceland is a land being torn apart. Straddling the mid-Atlantic ridge, the divide between two tectonic plates being forced asunder, its volcanic landscape is growing by centimetres every day. Unlike Scotland, which has some of the oldest geology on earth, Iceland, only 500 miles north west has some of the youngest. It is a land where fire meets ice, and heat meets arctic cold; in places it feels primordial like a protoplanet in a new solar system. Active volcanoes more →

Venue: Natural History Museum, London: October 19, 2012 to March 13 2013. Later on tour to UK and other venues across the world. Currently on show at London’s Natural History Museum are one hundred winning and commended photos from the 2012 Wildlife Photographer of the Year competition. These have been selected from over 48,000 entries by a panel chaired by US photographer and environmentalist, Jim Brandenburg. Introductory words describe this year’s exhibition as a “spectacular showcase” of “the magnificent” and “the intimate” more →

Frank Hurley (1885-1962) was an Australian photographer. This short note aims to show some of his beautiful work primarily from Sir Ernest Shackleton's Antarctic expedition between 1914-1917, and to explore how he managed to make such emotive and exceptional images, as well as the immense challenges he faced and how he might have overcome these. This isn’t an attempt to review his life or work more broadly. I’ve used a number of quotes from relevant diaries; these might break more →

Duncan Fawkes "Murk Illuminated" caught my attention on Flickr recently and I was pleased to find a very informative and enjoyable blog and a stream of very satisfying pictures and Duncan was happy to answer a few questions for On Landscape... Can you tell me a little about your education, childhood passions, early exposure to photography and vocation? I grew up in the Scottish borders, somewhere I now recognise as a lovely part of the world. Like many youngsters I more →

Edward Weston is regarded by many as one of the most influential photographers of the twentieth century. Interest in Weston extends beyond his images, to that of his colourful life. His many relationships and his thinking processes are well documented; alot written by Weston himself in his Daybooks. It was in these journals, written over two decades, that Weston recorded his thoughts about his own work and the highs and lows of life as an artist; as well as more →

I guess talk of backups and administration can appear boring to some, or avoided because its complicated and difficult, well yes it is perhaps a bit boring, but does not have to be complicated or hard. more →