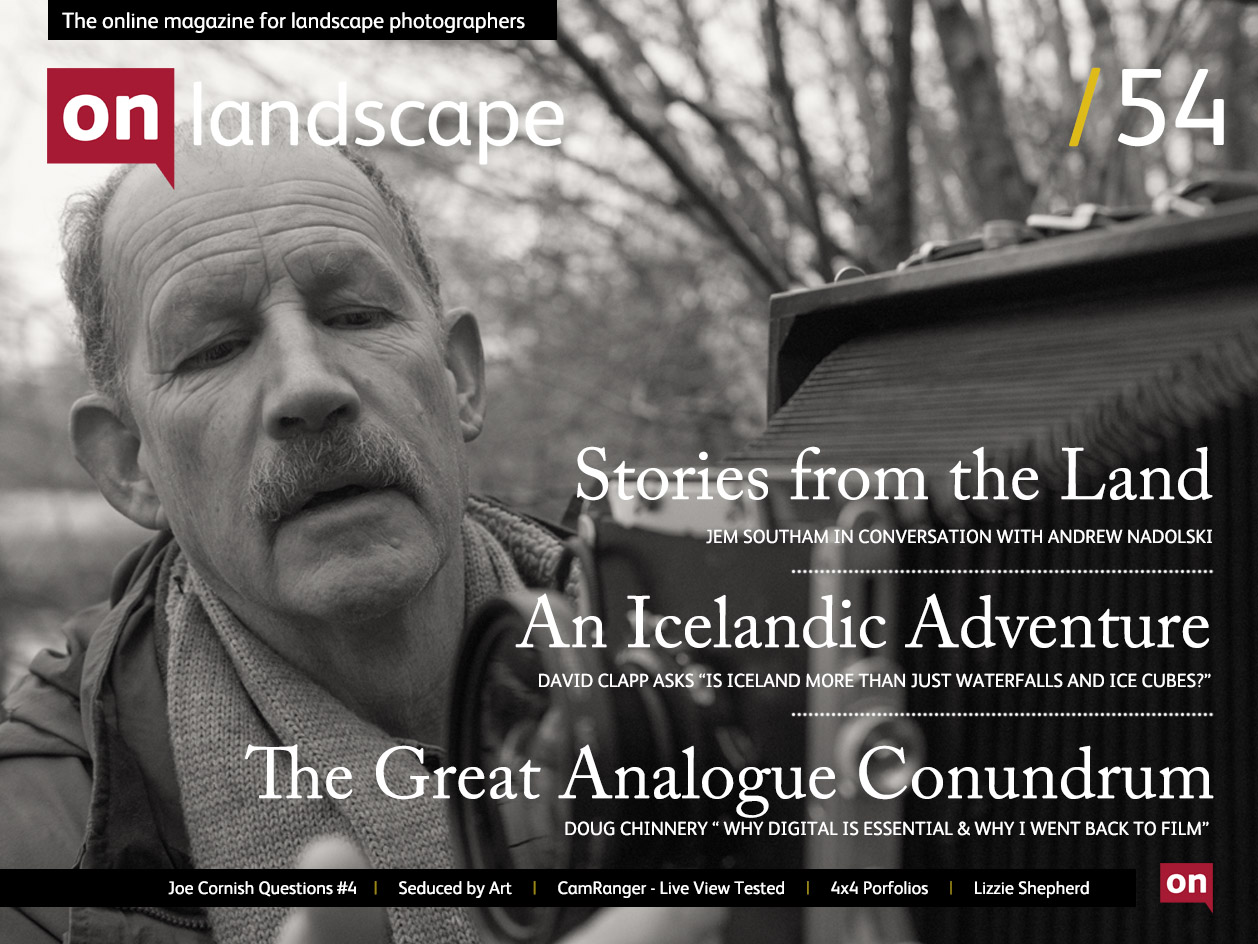 The Art of Getting Out There

Stories from the Land

Seduced by Art – Photography Past & Present

The Lineage of Fine Art and Photography

Is Iceland more than Just Waterfalls and Ice Cubes?

Why Digital is Essential & Why I Went Back to Film

One of my biggest goals in creating On Landscape was to nurture a more diverse culture of landscape photography, one more accepting of the different reasons for taking pictures and the different genres of the final output. Instead of the hobbyist, the professional, the romantic and the contemporary all solidifying the walls between them I hope that each can be more accepting.

One of the biggest barrier seems to be between the contemporary and the romantic and it is true that each photographer will always have his or her own tastes, just as they have their own tastes in food or music. However, everyone can definitely learn to appreciate and possibly learn to love any sort of art (or food, or music) but not without trying.

My first experience of Jem Southam’s work was taking a masterclass with him at the Lowry Centre in Manchester. I wasn’t a big fan of Jem’s work but I knew I should try to expand my outlook. After spending the day discussing photography in general and his work in particular I began to see past my own prejudices. To this end I’m proud to include Andrew Nadolski’s interview with Jem this issue and pleased that he has allowed us to include high resolution images from his ‘River - Winter’ book.

We hope you will see On Landscape as a gateway to see the best of landscape photography in all it's many and varied forms - if you think we're missing out on some of that please let us know, since creating On Landscape we've had to realise it is no longer just our magazine, it's yours as well.

We've also included the story of David Clapp's introduction to Iceland and his social media busting Aurora photograph that has managed to garner 3,500 shares since posted. David will be talking in more detail about the creation of this image in the next issue.

.. and don't forget we'll be adding the 4x4 section over the following few days and the PDF version will be released in about a weeks time. Until next issue then, which will be a 'Focus on Imaging' special - keep an eye on the news page for updates.

You can download the PDF by following the link below. The PDF can be viewed using Adobe Acrobot or by using an application such as Goodreader for the iPad. Click here to download issue 54 more →

Our new feature this issue is 4x4, a set of four mini portfolios each consisting of four images related in some way. If you would like to submit your own 4x4 portfolio please visit this page for submission information. John Irvine Nigel Flory David Higgs Adam Pierzchala more →

Stories from the Land

Jem Southam is critically regarded as one of the most important British photographers of the last twenty five years. Working with a 10x8 view camera and colour negative film, his patient pursuit of his art seems at odds with the frenetic pace of life in the 21st Century. He predominantly works in South West of England, often returning to the same location time and time again to record subtle variations in the landscape, how it changes during the seasons and exploring more →

Seduced by Art – Photography Past & Present

A visit to London this weekend with my parents-in-law took me to a few different exhibitions. The Ansel Adams exhibition has already been reviewed so I’ll be writing instead about the “Seduced By Art: Photography Past and Present” exhibition at the Sainsbury Wing of the National Gallery as well as “Constable, Gainsborough, Turner and the Making of Landscape” at the Royal Academy. The Seduced by Art exhibition’s primary purpose is to look into the ways that the themes, subjects and more →

I love Iceland! There you go I’ve said it. It’s a new love affair, and one which I feel very strongly about, but I have to admit, that it has never been particular high on my list of locations to visit. It’s an almost reckless statement as there is a truly astounding volume of excellent work that has been produced from this small frozen island over the last few years. It’s become a Mecca for landscape photographers, a ‘Do more →

Just before Christmas we asked our readers for a bunch of questions that we could put to Joe Cornish when he visited next and the response was fantastic. In the end we recorded two hours of audio but to keep installments to a useful length (a lot of people say they listen to them over breakfast or during a commute) we’ve split it into half hour sections. So, a big thank you to Joe and everyone who submitted their questions and here’s more →

Last issue we made a quick preview of the CamRanger device which I have to say I was quite enamoured of. We mentioned at the time that the CamRanger was showing differing resolutions in live view for the Nikon and Canon cameras and we promised we'd do a further test to show more details about this. So here we are - we spent a bit of time shooting video of the CamRanger in action on a retina iPad at more →

What I would urge the solely digital users to think about are the benefits of learning to use film. The disciplines it brings. more →

Can you tell me a little about your education, childhood passions, early exposure to photography and vocation? A little background on what your first passions were, what you studied and what job you ended up doing.  I come from a large family – all creative and musical, with a love of the outdoor life. Summer holidays were usually spent camping in Scotland, Wales, the Alps, often in the rain... I was an avid collector of things from the natural world more →