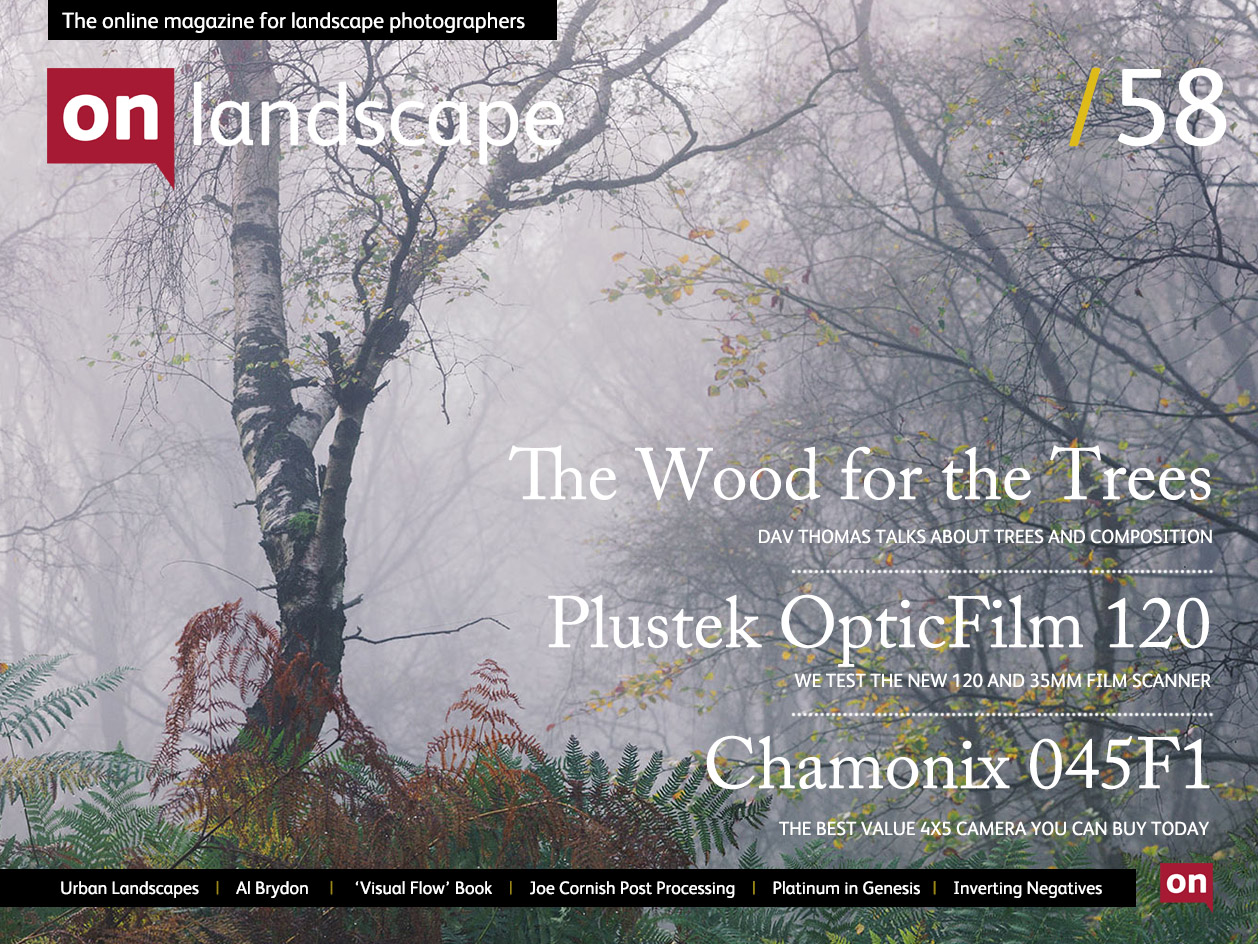 Seeing the wood for the trees

An idiots guide to photographing trees

State of the Art Film Scanning?

From Lightroom to Print

Asymmetric tilts come to the masses

A Look at Platinum vs Inkjet via Salgado's Genesis Project

The Art of Composition

Issue 58 arrives just in time to distract you from mourning the passing of Flickr and Tumblr (both victims to Yahoo's business development services). Well OK they're not dead yet but the way people are talking it's not going to be long. Well I suppose we can console ourselves with the fact that people can now upload up to 1,000 Gigabytes of photographs - "How great!", I thought, I was only complaining the other day about how few images you get to see online.

The editorial policymakers at On Landscape sometimes get accused of being a bit "film friendly" and "large format lovers" but we usually get on the defensive stating that we cover much more digital and that it's the photography that matters anyway. Not this issue though! We've got a bit of a film special. It all started with Plustek sending us a review copy of a brand new film scanner and at the same time we got an email from Dave Parry who had just received the first of a batch of new large format cameras from Chamonix, a chinese manufacturer with a reputation of quality at a decent price. We topped it off with a full length feature on inverting colour negative scans and a review of Salgado's platinum print exhibition and we have enough material to keep the moaners happy for another few months.

Elsewhere we asked respected large format practitioner Dav Thomas to discuss his tree photography as a warm up to a big feature on him and his new book project in a future issue. Finishing it all off with a much requested post processing screencast by Joe Cornish, a feature on finding quiet spots in the urban landscape, the dark forces of Al Brydon as featured photographer and a review of Ian Plant's and George Stocking's book on composition "Visual Flow".

You can download the PDF by following the link below. The PDF can be viewed using Adobe Acrobat or by using an application such as Goodreader for the iPad. Click here to download issue 58 more →

Seeing the wood for the trees

Firstly, shake loose the shackles of landscape photography composition rules, forget about foreground interest unless it is going to be a main feature of the photo. more →

Plustek announced a new competitor in this arena over a year ago, but it was only at the start of the year that units were getting into people’s hands. more →

We've had a few requests for more post processing videos and the last time we had Joe Cornish in the office we asked him to talk through one of his recent images from a workshop. more →

The camera is still ultralightweight and compact when packed. I suspect a user of an N model would be able to replace it in their camera bag with an F1 and not notice any appreciable change in weight or bulk. more →

A lot of Salgado's images rely on the impact of high density prints, and whilst credit must go to 31 Studio for producing outstanding platinum work more →

Tower Hamlet's Cemetery Park opened for 'business' in 1841 and closed for burials in 1966. It was one of London's seven great Victorian cemeteries ("the Magnificent Seven") and marked a vital change from burying the dead in small overcrowded churchyards more →

Very rarely does a book look beyond some of the generally accepted ‘rules’ or try to dig deeper into the reasons why some compositions work and some don’t. more →

Al has been intriguing us with his crepuscular concoctions for a while and we wanted to ask him some of the usual questions and get an update on this and his 'two photographers' Holga experiments. more →

A while back I wrote a small tutorial on how to invert colour negatives using photoshop. At the time I promised a video but was still working on the technique. more →