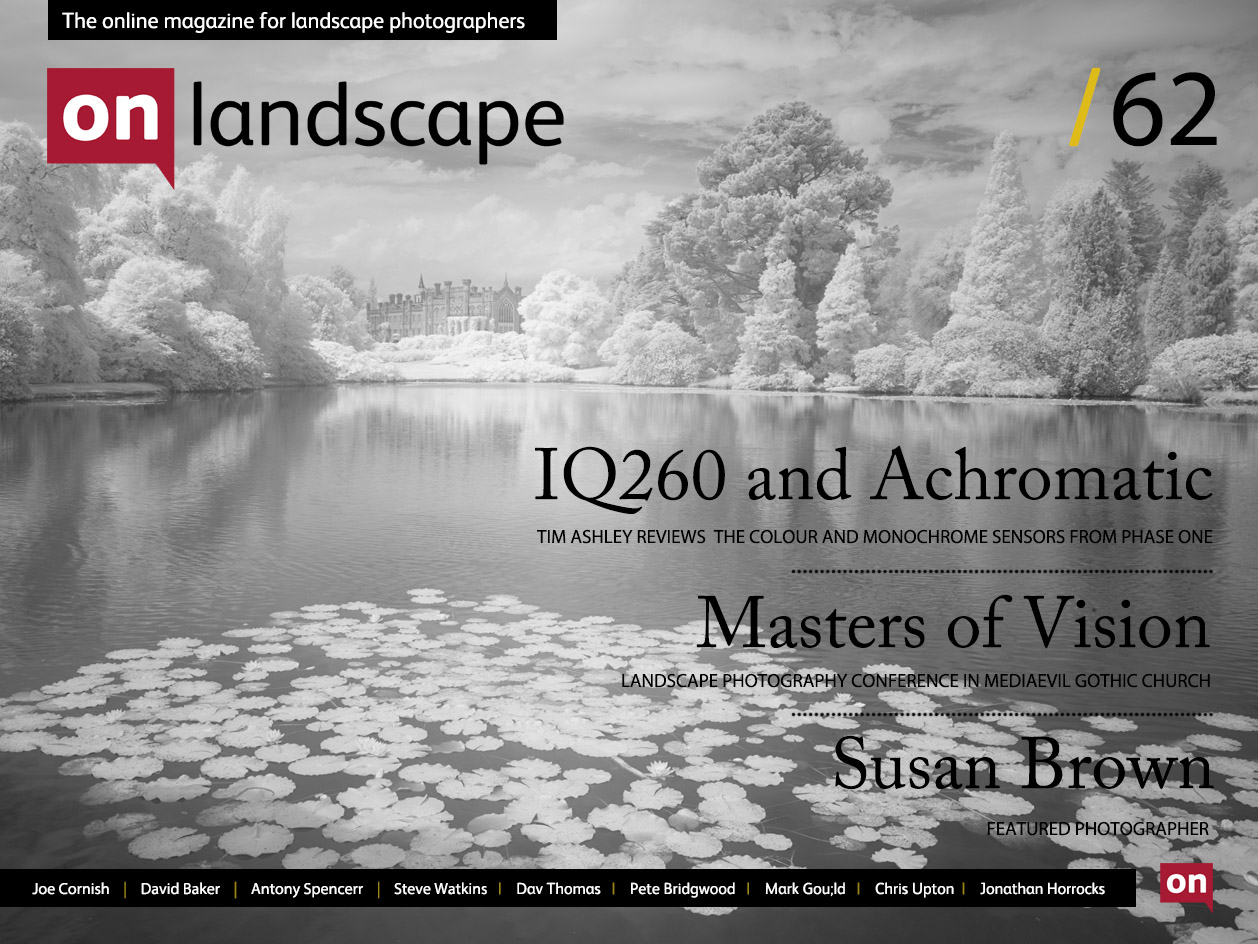 An Exhibition of Landscape Photography at Southwell Minster, UK

It's a great thing when people put themselves out to organise something for the landscape photography community and so we're dedicating this issue to Pete Bridgwood and his ongoing exhibition "Masters of Vision". We spent a great couple of days in the company of a variety of pilgrims who had come to support the event and interviewed all of the exhibitors which we've transcribed for your delectation.

We'd also like to introduce a new writer for On Landscape, Tim Ashley. Tim has written for his own blog for some time which you should check out here but he's agreed to write the occasional article for us. His first article is a bit of a special where we get to see what the cutting edge cameras from Phase One are capable of. Tim took an IQ260 and an IQ260 Achromatic (the one without the colour filters) and run them through their paces for us. Tim is also an ambassador for Photo Voice, a charity helping give communities and individuals a voice through photography.

Finally we've got Susan Brown as our featured photographer. Susan's 'Salt Water Tidal Pools' series has got quite a bit of attention but we were interested in hearing about all of her work and we think you'll enjoy reading about it.

You can download the PDF by following the link below. The PDF can be viewed using Adobe Acrobat or by using an application such as Goodreader for the iPad. Click here to download issue 62 more →

It is highly proprietary to Digital Transitions and unique in that it shows the Sensor Spectral Response 'normalised' to the spectral transmission of some oft-used filters. more →

In 2009 Pete Bridgwood put on an exhibition at Southwell Minster which showcased the work of a Master photographer as well as a few of his colleagues work. The first Master was Charlie Waite with a supporting role by Amateur Photographer editor Damien Demolder. Alongside Pete Bridwood's work was that of Dav Thomas, Mark Gould, Chris Upton and Jonathan Horrocks. The exhibition and location were a great success and two more →

Stone Sequence Gruinard Bay Tim: Hello Joe welcome to on landscape it's great to be here in this magnificent building what you make of it Joe: it doesn't get much better than this does it really. I love English Gothic/Romanesque architecture and so it's fantastic just to be in such a space. T: it is for such a small believed to have such a large minister more →

Aurora Kirkjufell Tim: Hi Antony – Firstly thanks for letting us interview you. Is this your first time to Masters of Vision. Antony: It is indeed T: Did you know what to expect when you turned up A: Not really – I’d seen a few photographs that Pete had sent over in an email so I knew a little bit of what to expect but it doesn’t prepare more →

Tim: Hi Steve, I believe this is your second Masters of Vision? Steve: That’s correct, the last exhibition – two years ago now – was my first. It’s very interesting to see how things have progressed. I think the perception of a photograph is very fundamentally changed by where you view the picture. I was mentioning to one of the other exhibitors that if you put these images in a more →

Hebridean Sea III Tim: Hello David and thank you for talking to us David: Hello Tim, thank you very much T: First time to Masters of Vision? Have you seen the pictures before? D: I haven’t been before, I had wanted to do so but hadn’t had the opportunity. So first time here in this frankly fantastic location. It’s superb. A real sense of history here, 900 years more →

Lime and Lemon Tim: You’ve been here from the start haven’t you? Dav: I have. I was here at the start so this is the third one that I have done. T: It’s almost like you’re part of the furniture. In fact you made the furniture! D: It is my furniture indeed. Luckily I don’t have to put them up anymore he gets a chap in to do more →

Passing Cloud Tim: Can you tell us a little bit about the exhibition – it’s been running for a few years now hasn’t it? Pete: Yes. This is the third one we’ve done. Four years ago we did the first one with Charlie Waite and then two years ago we did one with David Noton and this year we’ve got Joe Cornish as our Master Photographer. The more →

Padley Gorge Tim: Can you tell us about your involvement from the exhibition as you’ve been involved from the start? Mark: It’s four years now. I was one of the people that Pete invited originally to do the exhibition and when we first started we didn’t even know how we were going to do it so Dav designed the display boards and stuff like that and spent more →

Pushkar Tim: You’ve been doing this for a few years as well haven’t you Chris: Yes 2009 was the first one so third time here T: Have you seen changes since then? C: Yes it’s definitely got bigger. There are a lot more people who know about it and the standard has improved. This year is the best it’s been definitely. There is also a lot more variety so there more →

Cloud and Sea Tim: You’re one of the original and ongoing contributors to the exhibition. How did you get involved? Jonathan: Pete asked me when he first set it up, I’ve known Pete for quite a while and he had the idea and asked me if I wanted to be involved and it sounded like a great plan so that was the start. It’s all Pete’s more →

Last Light after Storm Can you tell me a little about your education, childhood passions, early exposure to photography and vocation? A father serving in the Royal Navy meant a somewhat haphazard education. I was given the choice of being left at boarding school or travelling; I chose to travel. My education was far from artistic; in fact my passion was for Sciences and more →