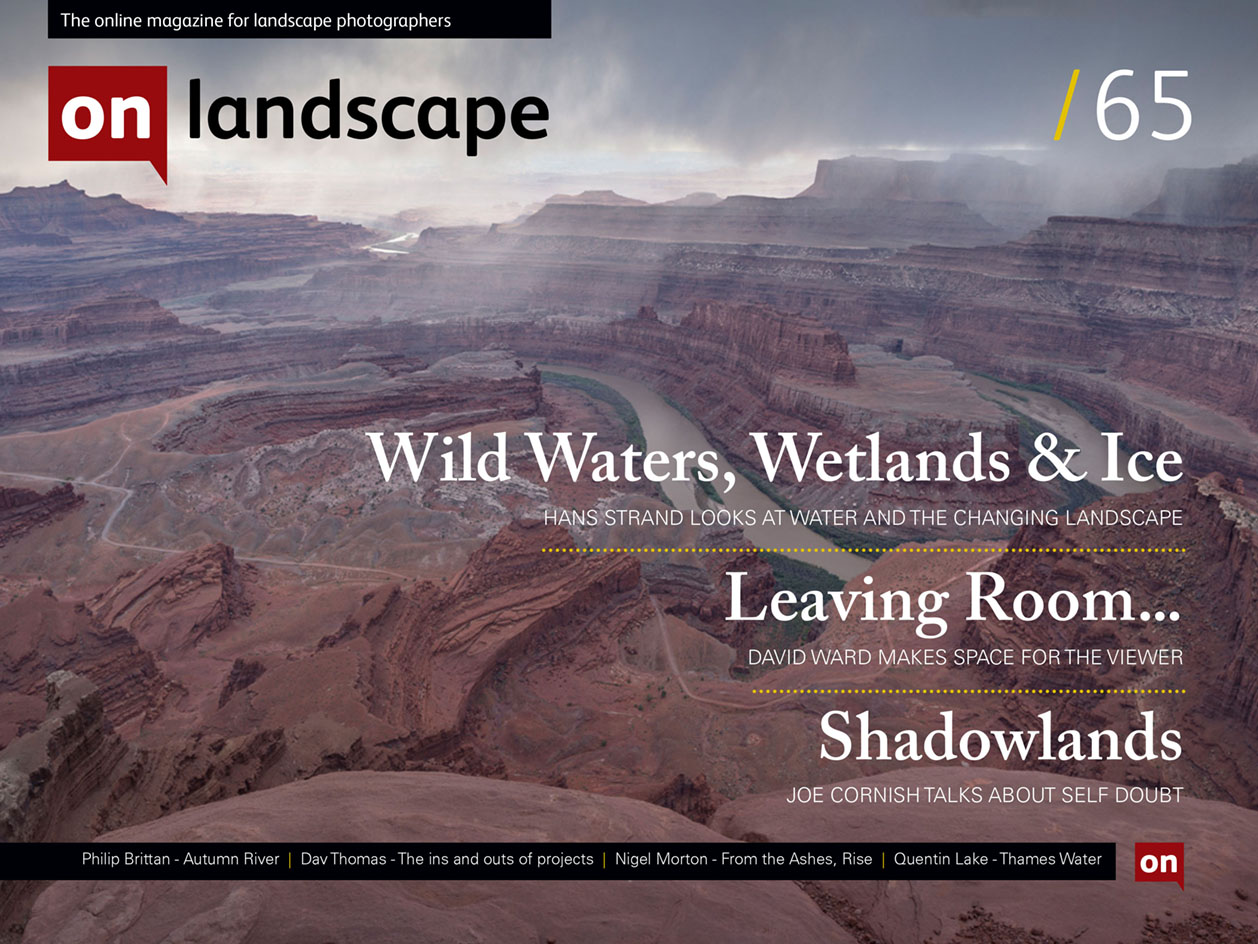 No Longer in Abundance

Where Does the Viewer Live?

The Ins and Outs of Photography Projects

What Exactly is a Project?

From the Ashes Rise

A Tale of Destruction and Beauty

Take Me to the River

Why Surface Tension can have Hidden Depths

Winner of Landscape Photographer of the Year 2013

Sweet Thames, run softly till I end my song

It's peak autumn time in the UK and I always think of this as the moment of transition. Photographers are trying to make the most of peak colour and inevitably will never get the amount of time they'd really like. As you know from last issue, I've just come back from our annual two week vacation in Scotland and as usual the vagaries of the seasons meant that whilst in previous years the trees were bare of leaves and we had -10ºC frosts and snow on the hills, this year saw green everywhere and we walked in t-shirts for much of the holiday. There was some colour toward the end and the lack didn't ruin our annual 'chillax'.

However, all reports now point to our Autumn reaching a crescendo and I'm trapped inside getting the latest issue out. What an issue though - as we've missed an issue or two over the last year due to moving house, amongst other things, I thought our subscribers could do with a bumper special to celebrate On Landscape's final settling into our new offices. We have Hans Strand, Joe Cornish and David Ward providing great editorial copy, Michela Griffith and Dav Thomas talking about project work and in that vein Nigel Morton, Philip J Brittan, Quintin Lake discussing particular projects they have undertaken. On top of this we have an interview with Take a View's LPOTY winner Tony Bennett by Doug Chinnery.

We have also run a Blind Critique Webinar with David Clapp that we will be uploading the next day or so and you'll be glad to know that we're running a second part of this to try and get through the huge number of submissions we received. You can register for the next event here.

We also wanted to take an opportunity to help a couple of our contributors with upcoming events. David Clapp who helped with our webinar yesterday has a post processing event in London called "Behind the Scenes" and David Ward and Joe Cornish have a potentially stunning workshop organised in South Africa title "Enter the Dragon". Sadly Bruce Lee won't be on hand to show you any ninja camera skills but you can see and read about Joe's scouting trip for this event here and here.

So we're back on track for another year of On Landscape and the plans are expanding. First goal is to get the PDF out at the same time as issue release and we're getting close to that. We're announcing our landscape photography conference in the next few weeks which is very exciting and we're expanding the variety of content we serve as well as putting on more live webinars given the great feedback on the ones we have run so far.

So thanks for continuing to support us and we look forward to future possibilities.

You can download the PDF by following the link below. The PDF can be viewed using Adobe Acrobat or by using an application such as Goodreader for the iPad. Click here to download issue 65 more →

In June, lots of snow is still left in the highlands. From the air you can see patterns of colourful rhyolite mountains mixed with snow stained by volcanic ash. more →

During a recent one-to-one session, my client - a charming, intelligent and talented photographer called Pam - told me that she often agonised about why she made photographs. more →

The shadow of self doubt is haunting and persistent; no matter how often the reassuring voices are heard it is the questioners and cynics to which the self doubter listens. more →

The Ins and Outs of Photography Projects

Anyone who has visited Thomas Towers will affirm that when it comes to projects, I’m a starter of many and a completer of few (none). As house renovations go, this one's a slow burner. With that in mind, I might not be the best person to comment on projects, photographic or otherwise but none the less, I thought I’d provide some of my thoughts on the subject and if we’re lucky, I might even make it to the end more →

From the Ashes Rise

My plans were deferred however after a fire broke out at the southern end of the forest. Probably caused either by a carelessly discarded cigarette or disposable barbecue, the blaze required over 100 firefighters to contain it. more →

Any photographer who chooses to make autumn their subject faces the significant problem of distinguishing their work from the heavy weight of photographic precedent. With so many images of autumn produced each year it is perhaps inevitable that a strong element of cliché cloaks the whole area. Is it possible to make work which lifts autumn into mystery and strangeness, enabling us to look again at the season with fresh eyes? more →

Take Me to the River

What Lies Beneath more →

The Landscape Photographer of the Year competition (or Take a View) has reached completion and the winners announced and we're happy to say, without any major controversy. Tony Bennett took the overall prize with a beautiful, misty photograph of Crummock Water (click the image below for a larger version). Doug Chinnery has had Tony Bennett as an attendee on one of his workshops in the past and took the opportunity to get back in touch to ask a few questions more →

I’m sure Quintin was not the first person to think of photographing the length of the river Thames but his approach and execution are somewhat different and make a refreshing change. In August of 2012, Quintin walked the 170 mile length of the river, from Kemble in Gloucestershire all the way to the city of London, backpacking and wild camping all the way in 10 days. more →