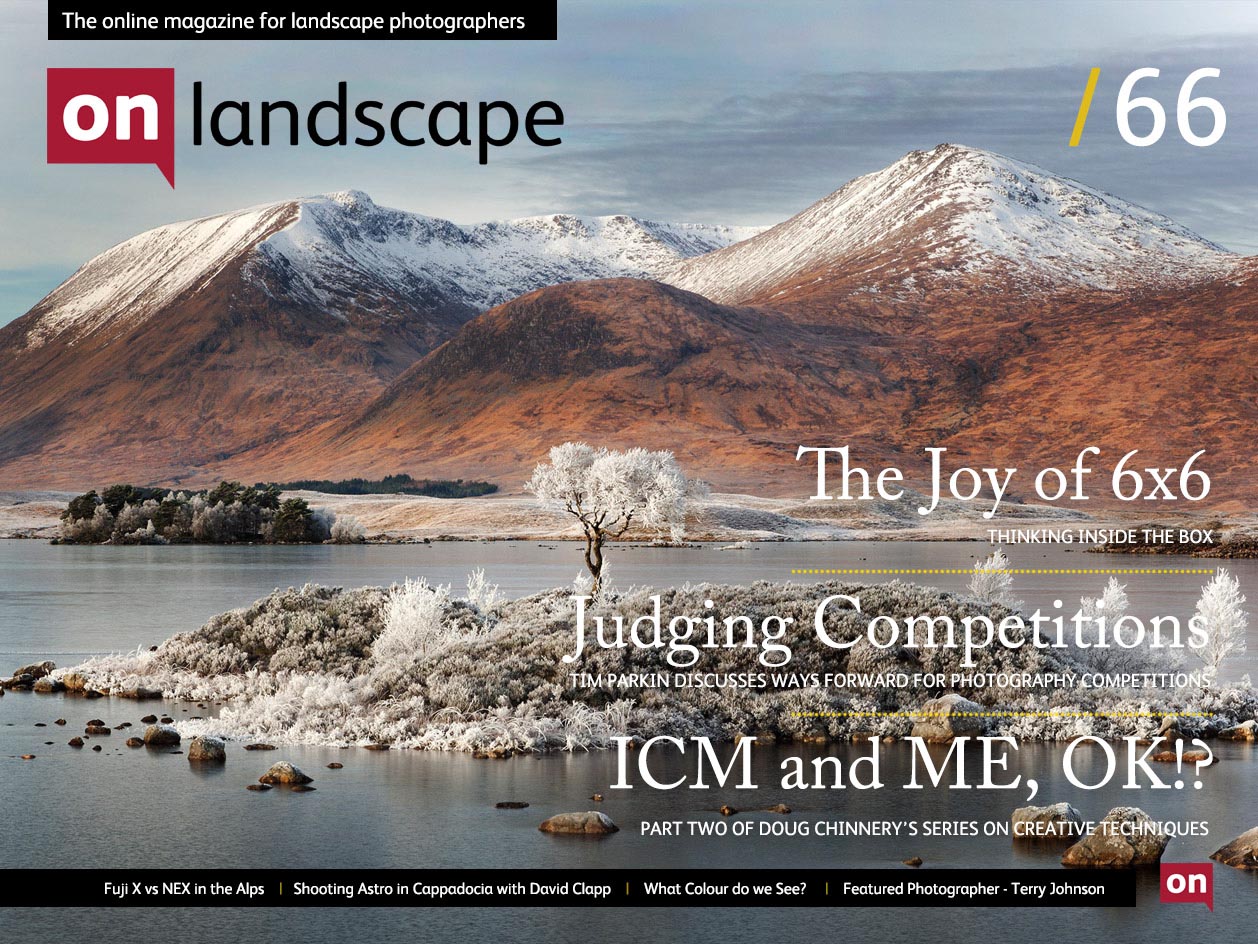 Chance of a Lifetime

The View from the Other Side

Thinking Inside the Box

Walking in the Dolomites – Fuji X or Nex

Last issue we featured Tony Bennett, the winner of the Landscape Photographer of the Year and, as some of you may know, this is the first year where I haven't written about the competition on my personal blog. This is because I was actually taking part in the competition and if there were anything to say I should have said it by now directly to the organisers. However I was also helping with the Wildlife Photographer of the Year, a competition organised with the Natural History Museum and coming up to it's 50th year of running. The perspective given by the two experiences was enough to warrant a short article in this issue where I've looked again at how competitions can be run.

With the merging of compact cameras and DSLR's, we have the prospect of seeing the, to my mind, essential feature of custom cropping modes appearing in high end cameras. This might finally allow serious digital photographers to make the most of the square format without jumping through hoops (inappropriate metaphor warning). Andrew Nadolski writes in this issue about why he thinks the square is so important.

David Tolcher's series on walking in Europe takes a more adventurous turn where he struggles with the altitude and new fangled sensors comparing Fuji and Sony compacts.

Doug Chinnery and I disappeared off to Clumber Park in Nottinghamshire to film the second part of Doug's ICM and ME series where we got down to the actual "waving the camera around" stuff and fascinating it was. Don't forget to register for the final part (link in the article).

David Clapp and his galactic backing band talks about his "space odyssey" to Cappadocia and  black and white photographer Terry Johnson as our featured photographer.

Oh - and one final thing! Paul Wakefield is releasing a book of his work in the new year and to coincide with it he is running a workshop in Scotland - read more about it in here. And if you're interested, book fast as there are only a couple of spaces left as of yesterday.

You can download the PDF by following the link below. The PDF can be viewed using Adobe Acrobat or by using an application such as Goodreader for the iPad. Click here to download issue 66 more →

If you ask many people who the seminal landscape photographers in the UK were I'm sure a majority would mention Joe Cornish and Charlie Waite. However who would Joe and Charlie mention if asked the same question. The answer would undoubtedly include the well known such as John Blakemore and Faye Godwin but on the colour side I can guarantee Paul Wakefield would be mentioned. Paul is perhaps not more →

I’ve written about judging competitions and also other aspects of competitions in the past but in the last year, I’ve been involved in the judging and/or planning of two high profile competitions. more →

Over the years there have been numerous 6x6 rangefinder cameras some with collapsible lenses. The last true 6x6 fixed format rangefinder was the Mamiya 6. more →

At On Landscape have been aware of Terry and his growing body of work for some time. His approach to photographing trees is strongly graphic and quite reminiscent of some oriental art. more →

Just like any adventure, it began with uncertainty, which plummeted to hard times, but it was hard graft, high spirits and the search for something entirely different that brought it all back home. more →

Walking in the Dolomites – Fuji X or Nex

I picked up an XE1 and 18-55mm zoom lens secondhand with spare batteries and case which enabled me to perform some preliminary testing vs the Nex 5n and Nex 7. I had high hopes for the JPEG output and for the quality of the zoom lens. more →