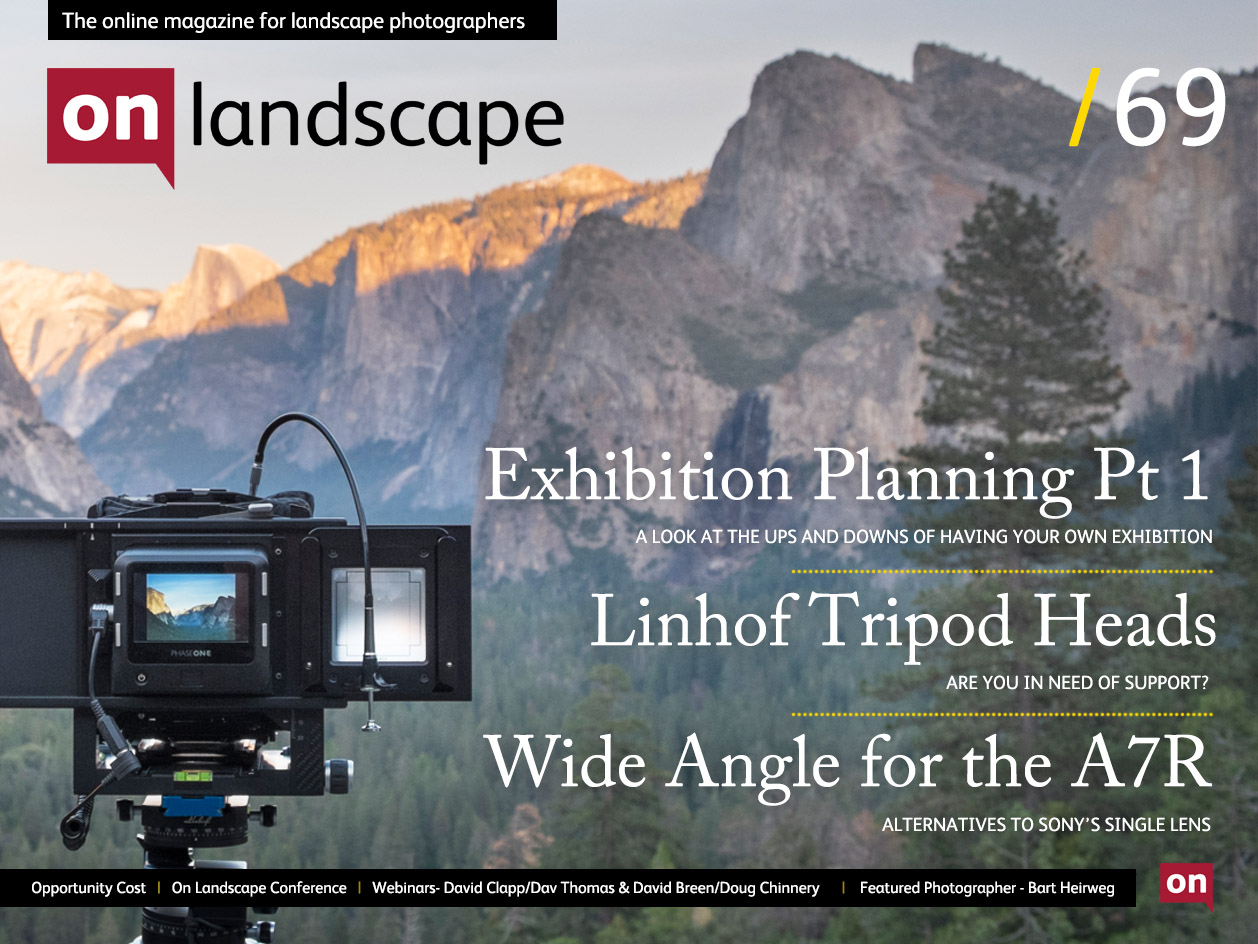 Are you in need of support?

Wideangle options for the Sony A7R

Is There Such a Thing as a Free Photograph?

Although we aren't an equipment oriented magazine, when cameras come along like move our field on a little like the A7R we can't help but take a closer look from a landscape angle and so we have this issue a closer look at a relatively unloved lens in digital terms - the Canon FD mount 35mm tilt shift. Mirror-less full frame cameras allow the use of almost any lens (with the appropriate adapter) and we'll be looking at more options in future issues.

I've been busy looking at printing and hanging these last few weeks with a gallery show opening in a couple of days time. I'm no expert in the exhibition arena but I was hoping my experience may be useful for others just taking on this daunting task (or hoping to!).

Elsewhere we've an article on whether any photograph can actually be 'free', we've caught up on our webinar recordings, have a review of a new oversize book publication from David Baker, a great set of images and answers from our featured, Belgian photographer Bart Heirweg and have some more information about our conference - whose ticket sales are proceeding well.

So it's back to card folding, label printing and print hanging for me which I'll be documenting in detail for our next issue. Until then I hope wherever you are you're getting some good photography weather.

You can download the PDF by following the link below. The PDF can be viewed using Adobe Acrobat or by using an application such as Goodreader for the iPad. Click here to download issue 69 more →

It is a well-known code among artists and photographers (of a certain age) that striving for perfection is a pretty pointless, hopeless and ultimately futile exercise. Indeed it is cautioned against in many cultures, for perfection is 'the exclusive domain of the gods'. However, that doesn't stop us looking for it in our photographic equipment. And there is no harm aspiring to find those bits of gear that get closest to perfection. For these are the tools that work so more →

Photography exhibitions are fairly rare in this country. The venues that could typically host such exhibitions are usually dedicated to painted works and if you've tried to find an appropriate space yourself you've probably discovered that they get booked up for at least a year in advance. So I was very surprised when I got a phone call on the second day of 2014 asking me if I would like to have an exhibition at the Ryedale Folk Museum - more →

As you might have noticed in our email newsletter or in the editors comments at the start of last issues PDF, we have been planning a landscape photography conference for November of this year and we started selling tickets to subscribers a couple of weeks ago. A few people have mentioned that they had missed this news and others had asked for more information about the event and what we hoped to get out of it. To this end more →

Wideangle options for the Sony A7R

The introduction of the A7R introduced the tempting concept of a specialist small high MP camera for landscape enthusiasts. As we discussed in the initial review it delivers on quality and portability but with a paucity of lenses to make it a totally compelling purchase. The Zeiss 35mm and 55m lens introduced with the camera certainly get the best that the sensor can deliver. Both Andrew and I have the 35mm lens, Andrew has the 55mm lens and both more →

I’d like to introduce an idea that comes from business planning but I think has a great deal of relevance to photography. The situation is as follows - you’re out on location and see something that interests you and the temptation is to say “well, digital photographs are free, film is cheap (ish). Why not have a go?” I’m hoping to highlight some of the reasons why this isn’t necessarily the best choice to make or why it’s worth more →

I hope you've had time to drop in on one of our blind critique sessions over the last couple of months. Dav Thomas and David Breen, the two directors of Triplekite Publishing, took part in one at the end of January and it was most enjoyable to take part in (although Dav teasing us with his malt whisky was almost too much to bear - next time send some over Dav!) The webinars are open to anyone and we upload more →

It's my pleasure to introduce our first Belgian featured photographer, Bart Heirweg. You may recognise a couple of Bart's images from various places but his image of Cat Bells in the Lake District won the Visit Britain award in last years Landscape Photographer of the Year. As long as I can remember I have been interested in nature. I grew up on the country side and was always to be more →

Books by British landscape photographers are fairly thin on the ground.  We've a handful from the end of last year that we're going to review but there is one book from one of our featured photographers that we thought you'd like to know about now as he has an exhibition of his images to go along with the book running from Thursday the 6th of February to Tuesday the 4th of March. more →