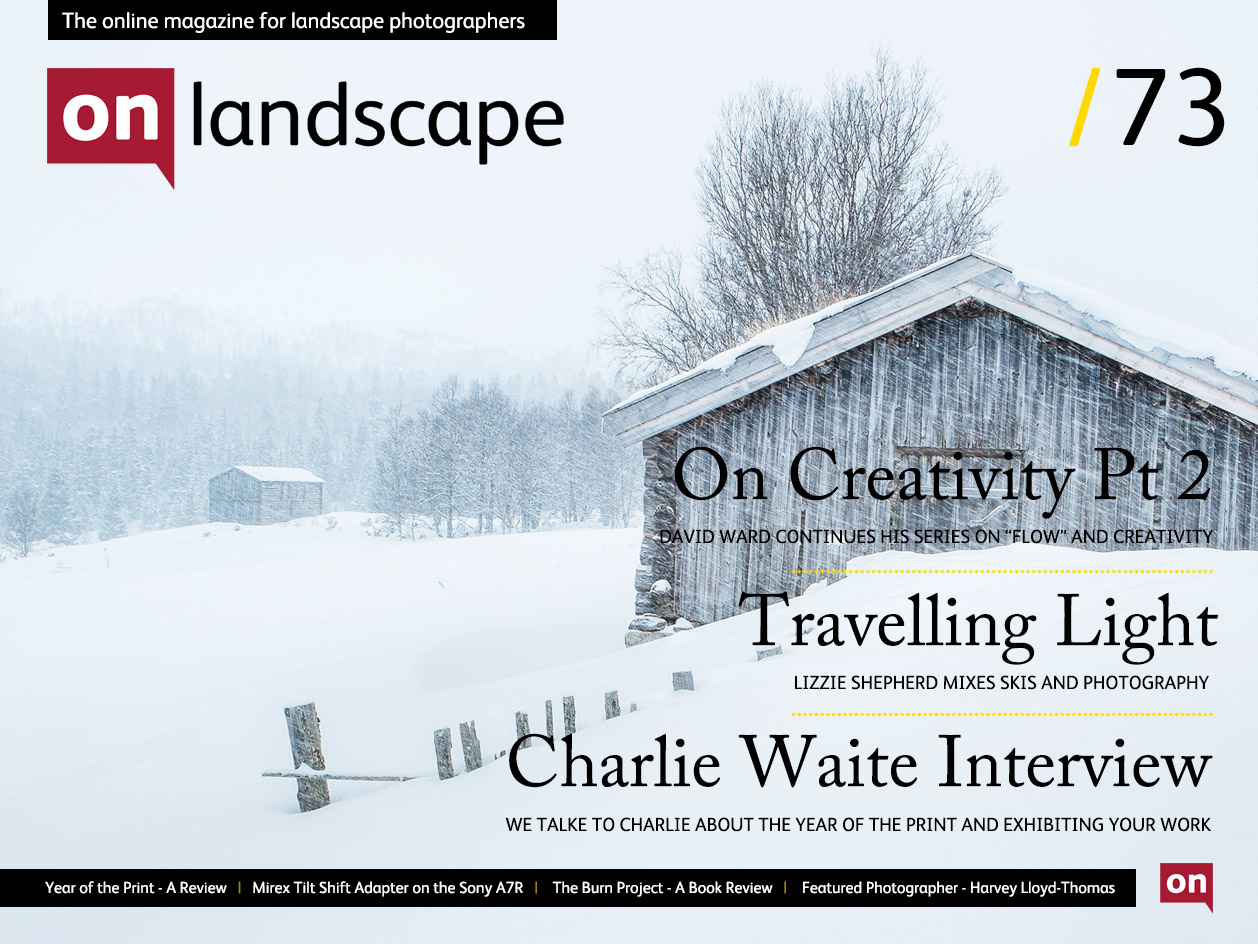 Part 2: Getting in the Flow…

First look at the new Mirex adapter for the A7 & A7R

About the Year of the Print and Exhibiting Photos

The Year of the Print Exhibition

The popularity of the Sony A7R doesn’t show any sign of weakening and my own temptation to purchase one has been tweaked by David Tolcher’s review of the Mirex Canon to Sony tilt shift adapter in the current issue. The ability to use a whole range of legacy lenses with movements on such a small camera mean the possibility of a truly compact high end landscape photography kit. As long as people aren’t getting bored of the A7R coverage we’ll continue to look into the possibilities as they not only affect the A7R but any other mirrorless devices that come out in the future.

David Ward continues his essay on creativity and the flow state this issue with some hints in how to get into that state - a problem many photographers have, especially when they go on photo holidays and the first day is usually a hard creative slog, however enjoyable.

Lizzie Shepherd takes us on a ski backpacking trip to Norway’s oldest national park, Rondane, and discusses the use of lightweight cameras to take advantage of fleeting opportunities when travelling fast.

We spent a couple of days in London recently where we were attending the opening of the Year of the Print exhibition, the brainchild of Charlie Waite. We also took the opportunity to interview Charlie about the project and exhibiting your pictures in general. In the next issue we’ll include a transcription of a couple of discussions that took place during the week between Joe Cornish, Charlie Waite and Steve Watkins.

Harvey Lloyd-Thomas is a photographer we’ve been keeping track of and we opportunely met him on the Iceland trip that took place with Joe Cornish, David Ward and Daniel Bergmann recently. He was great company and agreed to be one of our featured photographers when we got back to the UK.

Finally we wanted to introduce you to one of our favourite books and photography projects of the year. The Burn by Jane Fulton Alt is an astonishing project documenting the controlled burn of grasslands in the US - we’re hoping you like it as much as we do.

You can download the PDF by following the link below. The PDF can be viewed using Adobe Acrobat or by using an application such as Goodreader for the iPad. Click here to download issue 73 more →

Flow was something that happened in my creative life long before I comprehended its significance. Twenty years ago I thought that it was just an odd state that happened from time to time. more →

Travelling lighter? I’m guessing a number of photographers will identify with that - particularly given the ever increasingly popularity of mirror-less CSCs. I think it would be fair to say that not many of us actually enjoy carrying heavy loads up and down hills, or wherever else our photography takes us. But working faster?! That doesn’t sound like something any self-respecting landscape photographer should aspire to, does it? Surely it’s all about working more slowly - losing ourselves in the more →

Our recent article on the Mirex adapters from Germany sparked a lot of interest with the opportunity to mount medium format lenses on Nikon or Canon SLR cameras. In a little advertised move (you wont find it on the Mirex website) they have produced a tilt/shift adapter from the same stable for mounting EOS mount lenses to Sony ‘E’ mount.  This becomes of particular interest to A7/A7R owners who now have access to some very interesting possibilities. http://www.mirex-adapter.de/index.htm The mount more →

The Year of the Print Exhibition

The idea of a group exhibition where the exhibitors are selected by who has the incentive to put their hand in their pockets and the pictures selected by the same people initially struck me as a recipe for disaster. Without a curatorial control over such an exhibition the end result could have been a mashing together of holidays snaps and works of art; literal representations among ICM madness. So it was with some surprise that I entered the Mall more →

When I first started looking at photos and photo books I vividly remember that visceral thrill of finding a new body of work sparked the imagination and thrilled with the sheer brilliance of seeing and execution. Over time I’ve been encountering this feeling less and less - I still get a thrill from seeing great photography but only a few times a year do I encounter something that reminds me of that original feeling. Jane Fulton Alt’s “The Burn” more →

Can you tell me a little about your education, childhood passions, early exposure to photography and vocation? As a child I was always into painting and drawing, along with Lego and later programming my ZX81. I did Art at A Level (along with Maths and Physics) and at one point thought of going on to do an Art Foundation Course, but ended up studying for an engineering degree and then a computing PhD at the University of Bristol. Other than the more →