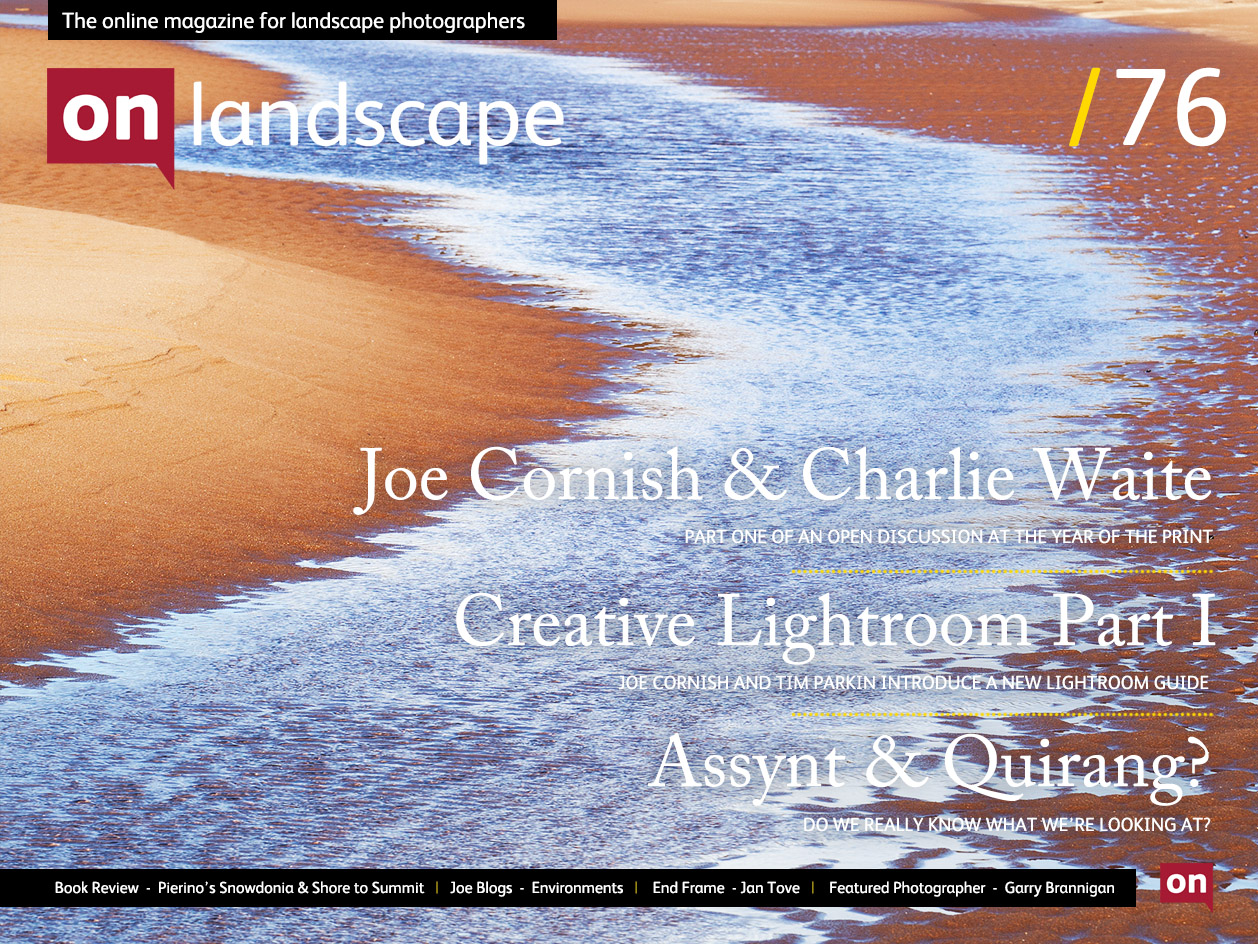 An Open Discussion - Part One

Lightroom for Landscape Photographers : Part One

Do we really know what we are looking at?

A review of Pierino's latest book on Snowdonia

Tim Parkin discusses one of his favourite photographs

We’ve been listening to a bit of feedback from our readers saying that although they would love to use Photoshop for their work, it’s too expensive. We agree and hence we’re going to be trying to use Lightroom for a lot of our post processing demonstrations. In order to get the ball rolling, I’ve been working with Joe on a series of Lightroom tutorials. The goal of the tutorials isn’t to teach you how to use Lightroom from the ground up but to teach you how to post process landscape photographs. I see this as a big difference. Learning what the knobs and sliders do with a piece of software is a lot different than knowing how to use them in anger. It’s like learning that a steering wheel turns the car left and right and learning how to drive.

Our goal with any of our software demonstrations will always be subservient to bringing out the best of a good photograph (although we skirt around the edges of defining just what a good photograph is!). Our first instalment gets your started in how to assess images but we’ll be jumping into actually applying what we’ve learned in the very next issue so if you’ve got anything you’d particular like to know about - don’t forget to leave some comments!

You can download the PDF by following the link below. The PDF can be viewed using Adobe Acrobat or by using an application such as Goodreader for the iPad. Click here to download issue 76 more →

During the recent "Year of the Print" exhibition organised by Charlie Waite there were a couple of discussion talks with Steve Watkins, Editor of Outdoor Photography, as compere. The topic was open and questions came from audience members and social media. Here is the first of these talks - the second will be published in the next issue. Audience: What is the secret of a great photograph? Joe: Well I’m not sure if there is a secret. There is a great more →

In the first part our new guide to Lightroom for Landscape Photographers we take a look at the environment - how you view and assess images. more →

Introduction Among hill-walkers and climbers there is a fairly keen appreciation of the correct names of Scotland’s mountain regions and the hills which lie within them. Having come to landscape photography from  such a background, I  have found  that the names used to describe some of our most photographed places are often at odds with long-standing place-name tradition. In this article I have highlighted a couple of examples of very well-photographed places where a lot of confusion seems to have more →

Pierino Algieri, as the name probably suggests, hails not from Wales but from Southern Italy, only settling in Wales after a tortuous Second World War. I wouldn’t mention this biographical aside but it’s part of the joy of this small photographic book. Pierino has written what is effectively part family history, part diary, part photo guide and part ode to the Welsh countryside. The passion for photography and family reflect each other well and after a foreword by Peter more →

Like many photographers I have a love-hate relationship with geology. Love, because it’s endlessly fascinating and you can’t photograph the British Isles without wondering at the different processes that made it. Hate, because what starts out so simple (Granite, Sandstone, Uplift, Glaciers) gets horrendously complicated very quickly (Plagioclase Feldspar, Pyroclastic Breccia, Lithospheric Flexure, Glacial Surge Retreat Drumlin Formation) so most attempts to learn a bit more or to try to identify structures often ends up at a confusing dead more →

Can you tell me a little about your education, childhood passions, early exposure to photography and vocation? I was born in Sheffield. My Dad was a newspaper editor, my Mum a mother and housewife. Dad worked all hours in his office in the city centre, but I preferred being outdoors and as our back garden opened out into woodland, that’s where I remember spending my childhood when I wasn’t at school. We then moved to the edge of the Peak more →

A few years ago I was in Edinburgh when the G8 summit was held there. A widespread good-humoured protest rally marched through the city. One group that caught my eye was the one in skeleton costumes carrying banners that said “Save the planet – join the Mass Suicide Movement!”. I couldn't help smiling and thinking that this was unlikely to be a successful political campaign… even though you could see that from an ecosystem perspective, they had a point. more →

I must admit to a bit of guilt after seeing the responses of Julian Barkway and Joe Wright to my proposed End Frame request. more →