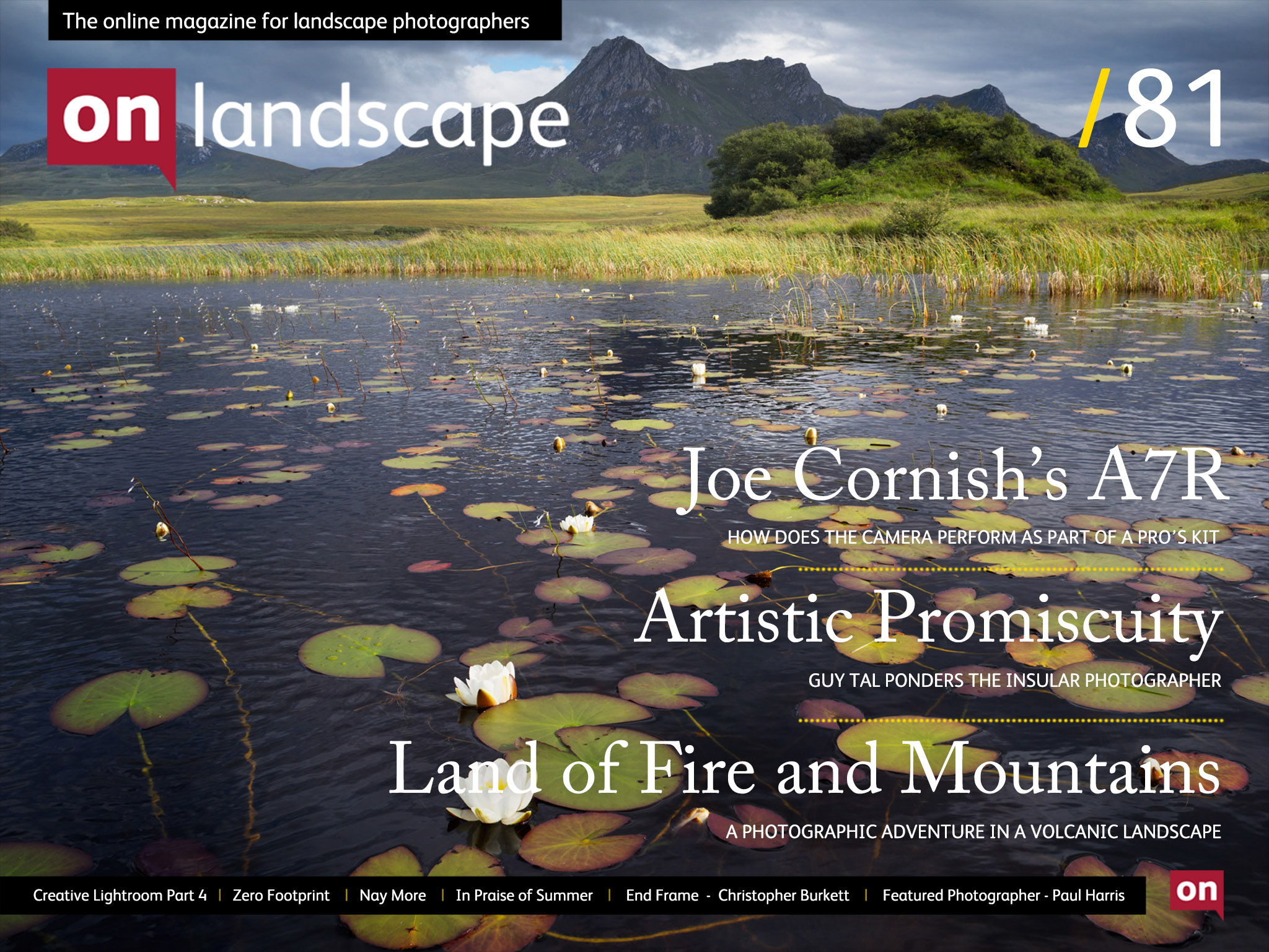 Antony Spencer chooses one of his favourite images

In praise of Summer

Colin Bell on the Making the Most of ...

The Land of the Fire Mountains

A Photographic Adventure in a volcanic landscape

A Question of Influence

What sort of camera is the Sony A7r?

Joe Cornish looks at the A7R after 6 months of use

Summer is over but for some photographers it hasn't been a holiday from photography. Colin Bell in our latest article talks about summer in different terms and we've been out in the heather - a wonderful carpet of purple that covers most of the moorland in the UK starting from late August. At the coast the extreme extent of the suns path has given people the opportunity for sunset and sunrise angles. But things are turning, the leaves are starting to show colour and most professional landscape photographers running into peak workshop season.

But most of the time we've been slaving in front of a hot computer trying to coax our old server along until we get a bright shiny new one in the next couple of weeks (actually the server could be filthy because I'll never see it in its bolthole in a York dungeon). We're also installing a new internet connection in our rural offices - we've discovered the joys of satellite and in a few weeks time we'll have a HD streaming quality 20Mb download and 6Mb upload. That means we can do more video again and we'll be able to upload it to our new Vimeo service (replacing our very old and scarily flaky streaming server).

So in all I'll be as happy as you when we get the techy stuff over and I can get out there and make the most of the seasonal colour.

You can download the PDF by following the link below. The PDF can be viewed using Adobe Acrobat or by using an application such as Goodreader for the iPad. Click here to download issue 81 more →

For me there was one obvious image, well, one obvious artist anyway. Christopher Burkett is a landscape photographer who was only introduced to me a few years ago but many of his images have had a huge impact as I keep revisiting them. more →

In praise of Summer

Let’s be honest, summer gets a raw deal from us photographers. Of the seasons, summer is the one that has for us, on the face of it, fewest qualities and the greatest number of perceived down sides. Up until this last season, and I shouldn’t be quite so rash to talk in the past tense as we are still in August, I would be one more voice proclaiming “everything is just green”, “sunrise is too early”, “there are too more →

Can you tell us a little about yourself, how you got into photography and how much of a role it plays in your life now. I started painting and drawing at a young age and won quite a lot of competitions sketching the scenes around me. I didn’t have access to a camera at the time, and although Mum had a Box Brownie, the film was no longer available. A Vivitar point and shoot appeared in my stocking when I more →

The Zero Footprint project, explained in a nutshell, is a series of landscape photographs captured from one single location over a period of five years, and counting. The restriction is purely geographical – roughly one square metre of the patio outside our kitchen, we could use any camera and lens combination and had the entire (not insubstantial) vista as a palette. The one other stipulation was that each image should be aesthetically pleasing in it’s own right, as well more →

In this issue’s Lightroom guide we took a second look at the adjustment brush and graduated filter brush. more →

Paul Harris was born and grew up in Hackney, east London.  After a variety of jobs he became a professional photographer, then Multiple Sclerosis put him in a wheelchair and now Marian, his wife of nearly 30 years, takes him on photo trips every week and they explore the lovely countryside, villages and coastlines of NE Essex and south Suffolk. I was taught b&w processing at school. I took my Brownie more →

The Land of the Fire Mountains

Unsure as to whether this was going to be an article about a location guide, photographic inspiration or “what’s in my bag”; I decided to make it about all three! Consequently, it’s quite lengthy but I do split it broadly into those areas if you feel like dipping into one aspect first, although I do think it reads better top to bottom. For information, I did write a little about this location previously on my own website blog after more →

With this in mind, it was with some bafflement that I recently heard from a fellow photographer asking if I would recommend avoiding viewing other people’s photographs as a means of isolating their own “vision.” more →

What sort of camera is the Sony A7r?

From the outset let me explain that this is not a conventional camera review. If that is what you are seeking then returning to the usual suspects (DP Review et al) will give satisfaction. This is unashamedly a partial, personal opinion piece, based on experience gained as a regular user, in which I will come to a rather surprising conclusion. If I have now piqued your interest, read on… more →