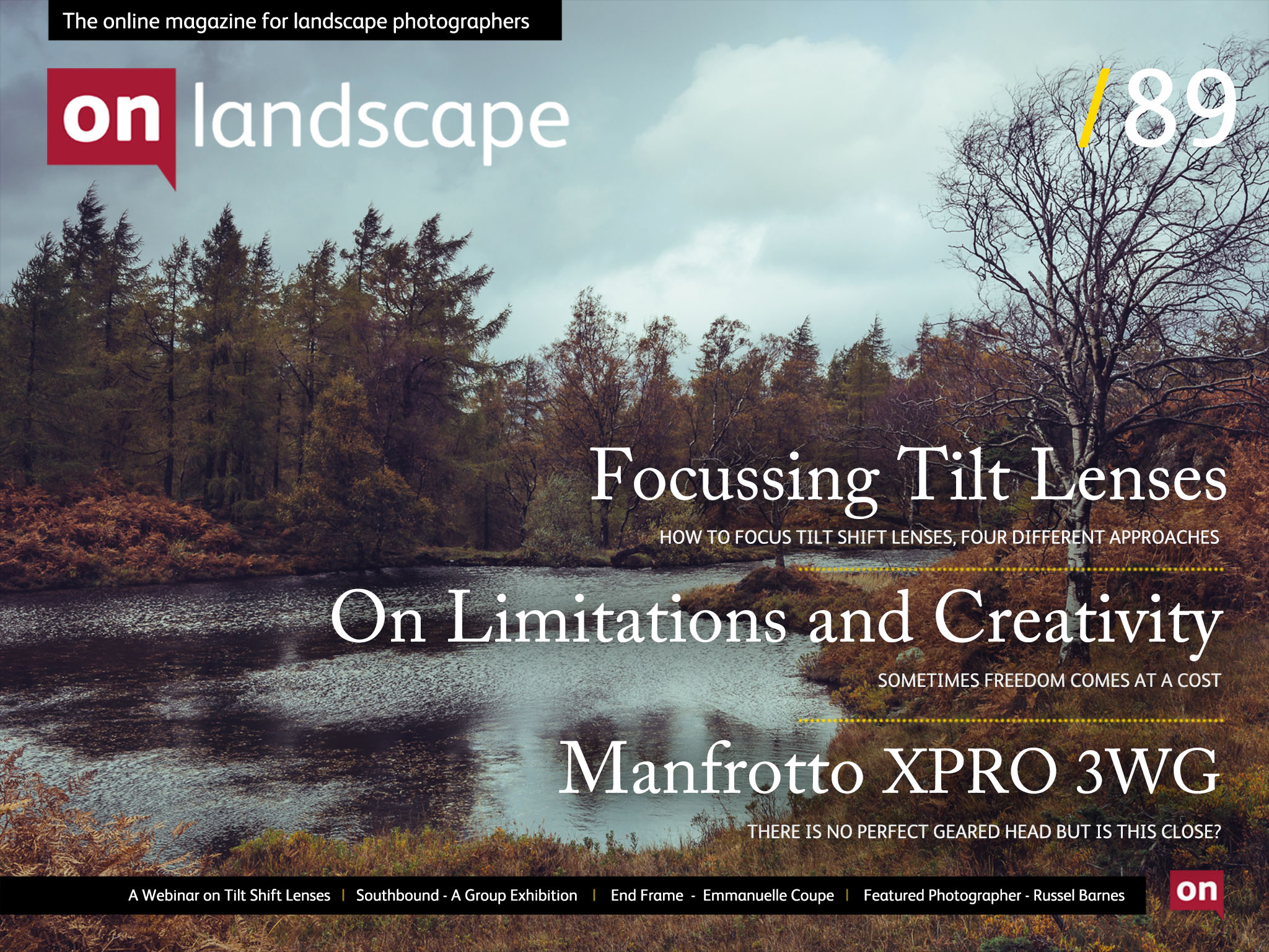 Southbound – Photography of a Southern Landscape

Methods for placing the plane of focus where you want it

On Limitations and Creativity

Freedom comes at a cost..

Valerie Millett Discusses one of her Favourite Images

Focus on Imaging ended two years ago but not because of any lack of success. If anything the show was still growing and it was no surprise when Future PLC (who publish a range of magazine titles) picked up the reins and rebooted it last year. I missed the first show under new ownership though but was determined to get down this year. In the end we did so with the help of Paula from Linhof Studio (whose stand we shared a part of)

I have to say it was well worth it. The show doesn’t really raise my excitement because of the technical equipment on show - most lenses and cameras looks much like each other - and although there were some ‘idiosyncratic’ devices on show (the Lytro for instance) they only prompted a single eyebrow raise. What was wonderful about the show was the social side. The Linhof Studio stand became a bit of a hub for people to meet up at, particularly with the area to have talks from the likes of David Ward, Joe Cornish, Sean Conboy and me.

As for On Landscape, we didn't get any content directly from the show but we did use the opportunity to build a few relationships with manufacturers so that we can get a few early opinions on new gear when it’s appropriate (e.g. The Sigma 24mm lens and DP Quattro, the 5DS(R) and more). So whilst there wasn’t much news from the Show, it will enable us to bring you some interesting things in the next few months.

In the meantime have a read of issue 89 where we’ve been playing with a little bit of video content about Tilt Shift lenses (from sunny Bridlington!).

You can download the PDF by following the link below. The PDF can be viewed using Adobe Acrobat or by using an application such as Goodreader for the iPad. Click here to download issue 89     more →

Southbound – Photography of a Southern Landscape

A new exhibition of unique, award-winning landscape photography from the country’s south eastern corner, by Valda Bailey, David Baker, Terry Gibbins and Finn Hopson. The South Eastern counties of England are not necessarily the first places that spring to mind when considering landscape photography. They are often dismissed as being too small, too busy or just too ‘easy’. The work of each of these photographers challenges that view. Each more →

Balls or Gears? If you're asking about tripod heads this is the main question. There are those of us who prefer the freedom, weight savings and holding power that ballheads can bring or the control and fine tuning that geared heads give you. I've always been a ballhead sort of person but having seen my colleagues subtly tweaking compositions with their Manfrotto 410's and 405's (not to mention the fantastic and fantastically expensive Arca D4's and Cubes) I must more →

The live stream we recently broadcast about tilt and shift in landscape photography goes through an awful lot of ground on this subject, a lot of which could benefit from some written explanation. I’m not going to try to do all of this in one issue though, so I thought I’d start with an overview of the different ways of focussing a DSLR tilt shift lens. In this issue I’ll show you a method that relies on the way more →

On Limitations and Creativity

This morning I read a comment on a Facebook post saying simply that the weather recently had sapped any creativity and discouraged photography trips. I paraphrase, obviously, but it’s a sentiment that is seen expressed often. I’ve said it myself too, many times. Or should that be too many times! Only on Sunday morning I looked out early, saw the overcast sky and decided against going out. So, for those more →

When I was asked by On Landscape's editor Tim Parkin to write an "End Frame" article for the magazine he said the hard part would be selecting the image. The image had to be my favourite photo from another photographer. I knew immediately which image I was drawn to so that part was easy, however to put into words as to the "why" of it all has eluded me a bit. It was just an immediate visceral response, wow. On any more →

We tend to think of photojournalism in terms of that which fills the pages of our newspapers, but speaking to Russ Barnes it seems like a good description of his approach to image making. He says that he often goes out looking for a story and in search of the character of that which he sees. Much of his photography is local to his home at an interface between town and country. When he travels it tends to be more →