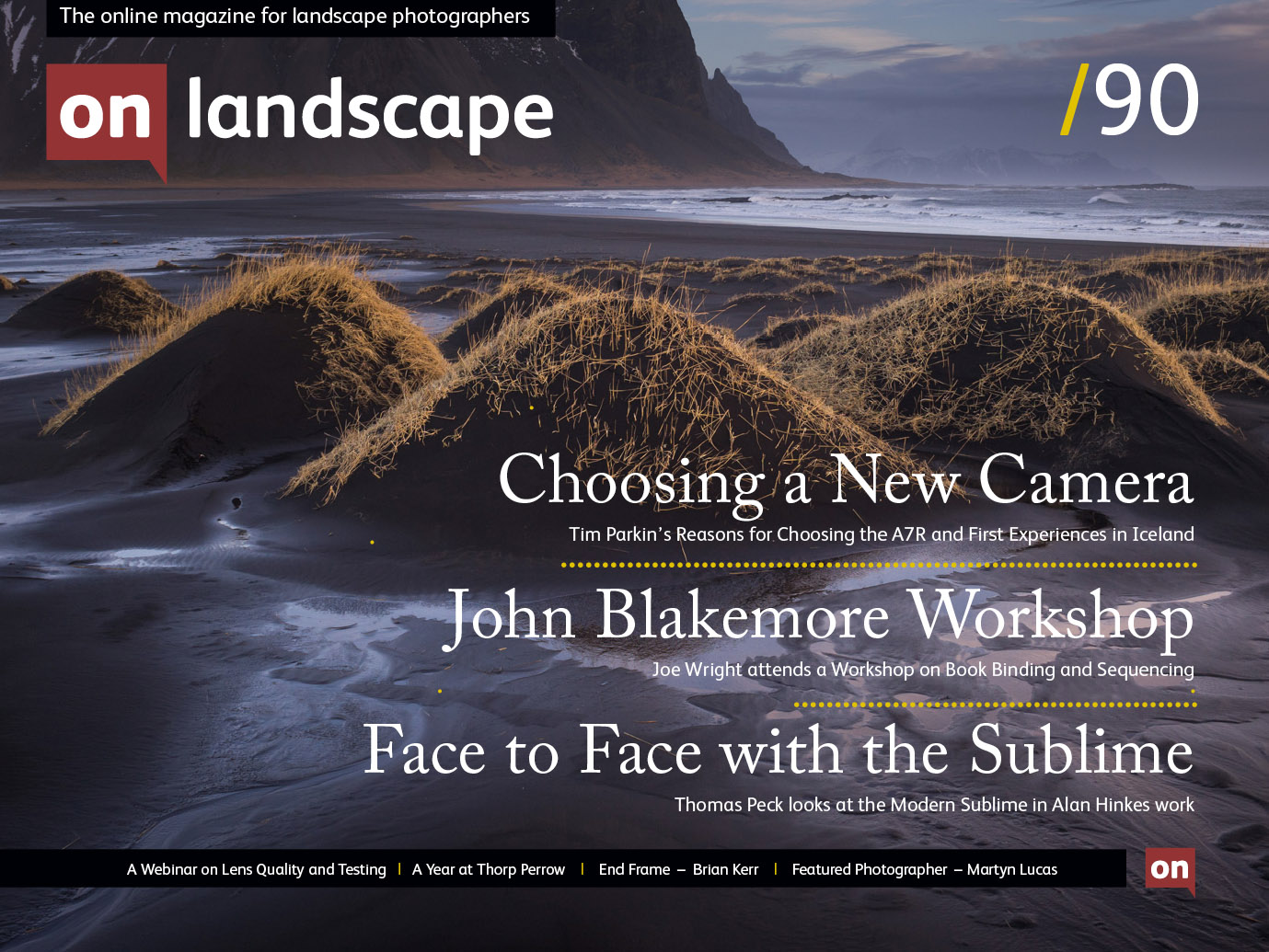 Recording of a Lengthy Discussion between David Ward and Tim Parkin

Face to Face with the Sublime

In the company of a master photographer

A Look at Tim Parkin's experience with the Sony A7R

Endframe – “The Start” by Brian Kerr

Mark Littlejohn Discusses one of his Favourite Images

Most people choose a camera with some guidance of the lenses that they already own. Canon users will tend to use Canons and likewise Nikon users. However, the mirrorless cameras that are becoming more and more popular are allowing the use of many different lenses. Especially for the full frame Sony you can use either Nikon or Canon lenses and for me this is at the heart of how mirrorless cameras will change photography. At a certain point it’s all about the lenses. To this end we’ve been looking closely at what makes one lens good or bad and how you can tell; can we trust reviews and what do they actually mean.

We’ve also been setting up a lens testing environment to try to make the most of what we have learned by researching this topic and in future issues I’m hoping to bring you reviews of not just modern lenses but old classics too.

You can download the PDF by following the link below. The PDF can be viewed using Adobe Acrobat or by using an application such as Goodreader for the iPad. Click here to download issue 90     more →

Tim Parkin and David Ward overran the predicted hour long discussion on the ins and outs of lens quality and testing but with such a lot of ground our listeners supported our flagrant ignorance of temporal limitations. With lenses costing so much itís pretty important to make the right purchasing decision but how can we do this without trying all of the possibilities out ourselves. Well there more →

Rod Bennington's exhibition comprises photographs resulting from more than fifty visits to Thorp Perrow Arboretum, displaying its remarkable appeal throughout the year. Born in North Yorkshire and having spent most of his life in the area, Rod now lives near to Northallerton, a base he regards as ideal for landscape photography, being midway between the North York Moors and the Yorkshire Dales. His interest and involvement in photography spans more than more →

Face to Face with the Sublime

Inspired by Alan Hinkes presentation at the A Meeting Of Minds conference at the Rheged Centre in Nov 2014, Thomas Peck investigates how 18th century notions of the sublime are brought to life in 20th/21st century mountaineering photography. Something quite extraordinary happens when you watch Alan Hinkes present his pictures and talk about his experiences climbing the highest mountains in the world. You quickly realise that his photographs in the mountains are not the run-­‐ of-­‐the-­‐mill dawn and dusk shots more →

I had the real pleasure of meeting one of the greatest living British photographers recently; John Blakemore. Not only did I get to meet him, but I was able to spend two days with him, listening and learning from the master. That said, I did have to share him with nine others, all as part of a weekend workshop organised by the Redeye Network covering book binding and sequencing. more →

At the end of last year I realised I could really do with upgrading my digital camera. This was prompted by a couple of things. The first was the fact that my current camera is heavy and combined with a chunk of glass that is the 28-135mm Minolta “Secret Handshake” lens it weighed almost as much as my large format camera. The second was that if I wanted to write about photography it made sense to be using a more →

This issue we have Bolton born Martyn Lucas and his pretty spectacular arctic, antarctic and sub-arctic work. Can you tell me a little about your education, childhood passions, early exposure to photography and vocation? Individually and together, my parents educated me about right and wrong, ignited my passion for creating images, introduced me to walking for long periods of time, and were in essence my guardians and my friend. You see I grew up as an only child in Bolton, Lancashire. more →

Choosing lenses can be a bit of a hit and miss affair. Without buying a range of lenses and testing them yourself, you have to rely on personal recommendations or online lens reviews. However, recommendations are subjective and understanding lens reviews isn't as easy as it sounds. Lots of jargon is bandied around and different websites use different methods leading to a world of confusion. David Ward and Tim Parkin will be having more →

Endframe – “The Start” by Brian Kerr

I remember the first time that I got up early with a camera to photograph the sun rise over Ullswater. It was the 23rd of February 2010 and I’d bought my first SLR camera, a Pentax K-X, about three weeks before. Up until this point I was firmly a happy snapping hillwalker who had treated himself to an upgrade from his old Canon compact. I went to Aira Point and shot back into the rising sun. The colour was more →