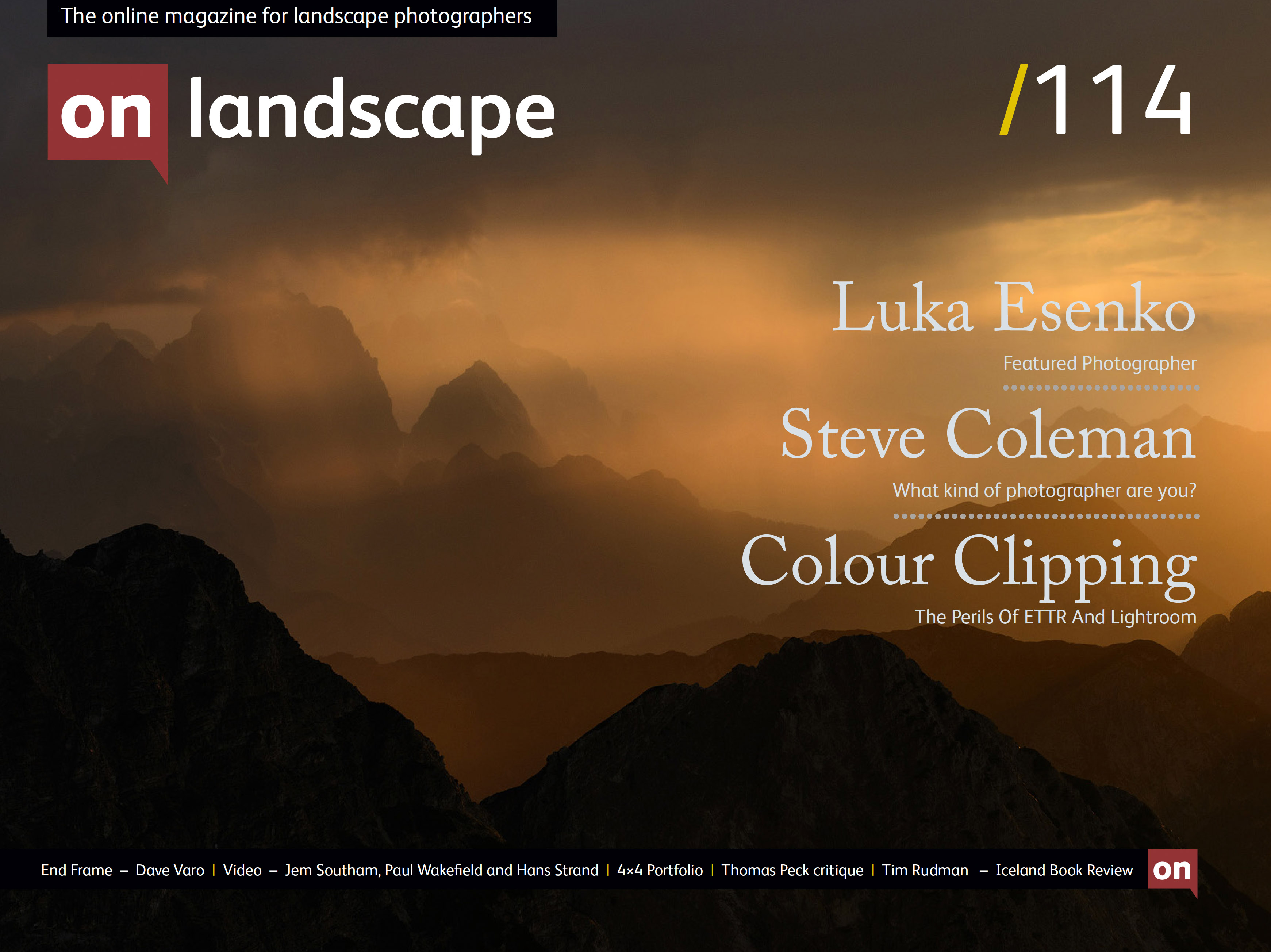 Dave Varo talks about one of his favourite images

Iceland – The Inspiration for the Book

Professional and Personal – An Illustrated Discussion with Paul Wakefield

Active participation in an image

The Perils of ETTR and Lightroom

Although our local area isn't classically photogenic for landscape photographers, we're very lucky to live less than a mile from one of UK's most vibrant wildlife reserves. I consider myself mostly a landscape photographer but with such a doorstep attraction I invested in a long lens and this weekend we spent a day wandering around looking for birds. We saw avocet, mandarin ducks, pochard, shelduck, tufted duck, buzzard, peregrine falcon and the highlight of the day was a pair of nesting great crested grebe with their wonderful zebra striped offspring paddling around. This experience reminded me that in other countries the differentiation between landscape and wildlife is quite a blurry one and 'nature' photographer means a bit of both (especially in Scandinavian countries). So although we may consider ourselves devotees of a certain style or genre of photography, it is always good to leave ourselves open to new experiences, wherever they may come. Whether they make our landscape photography better is irrelevant if it makes us appreciate the world around us more.

Is it a landscape image or am I just on a nostalgia trip? I’ll let you decide but to me it’s both. A photograph of any type is by definition a moment in time past so the two are probably inexorably linked. A lot of our industrial landscape has slipped away over the years without being captured. more →

In issue 112 we had an interview with Tim Rudman about his Iceland exhibition and book and promised to have a review of the book in the following issue. Hopefully, you’ll forgive us for being a little late on this but the good news is that it’s worth the wait! I think Tim will agree with me if I say he’s something of a perfectionist. And when a perfectionist collides with the world of book publishing, there will undoubtedly be more →

Iceland – The Inspiration for the Book

Hans Strand talked at the Meeting of Minds Conference 2014 about the inspiration for his book Iceland. more →

Professional and Personal – An Illustrated Discussion with Paul Wakefield

Pau Wakefield was one of the speakers at the 2014 Meeting of Minds Conference, which was recorded. Through the means of an illustrated interview with the photographer David Ward, Paul and David talk about how he has balanced his commercial work with the need to continue doing his personal work. more →

Jem Southam was one of the speakers at the 2014 Meeting of Minds conference, which was recorded. Jem Southam is critically regarded as one of the most important British photographers of the last twenty five years. Working with a 10x8 view camera and colour negative film, his patient pursuit of his art seems at odds with the frenetic pace of life in the 21st Century. more →

The best photographs leave something to the imagination, they leave room for the viewer wrote David Ward In an article "Leaving room… Where does the viewer live?" (OnLandscape, issue 65) David Ward goes on to explain that to capture the viewer’s attention, images pose questions without necessarily providing any answers; they tend to be slightly ambiguous and are open to interpretation. It is not enough to be a passive viewer in front of such images but rather there needs more →

Whilst taking some test shots in my front garden last week, I noticed something strange going on. It wasn't a problem capturing the images, I remember taking a normal exposure and then taking +1 and +2 brackets and the +2 bracket was obviously clipped on the back of the camera (as shown below). Knowing that the camera clipping indicator lies, I imported the images into Lightroom, set the more →

Luka Esenko said hello to me at the Photography Show last year and showed me a beta design of his SNAPP location guides. He's a talented photographer in his own right though and his work from his home country of Slovenia is well worth spending some time with. more →