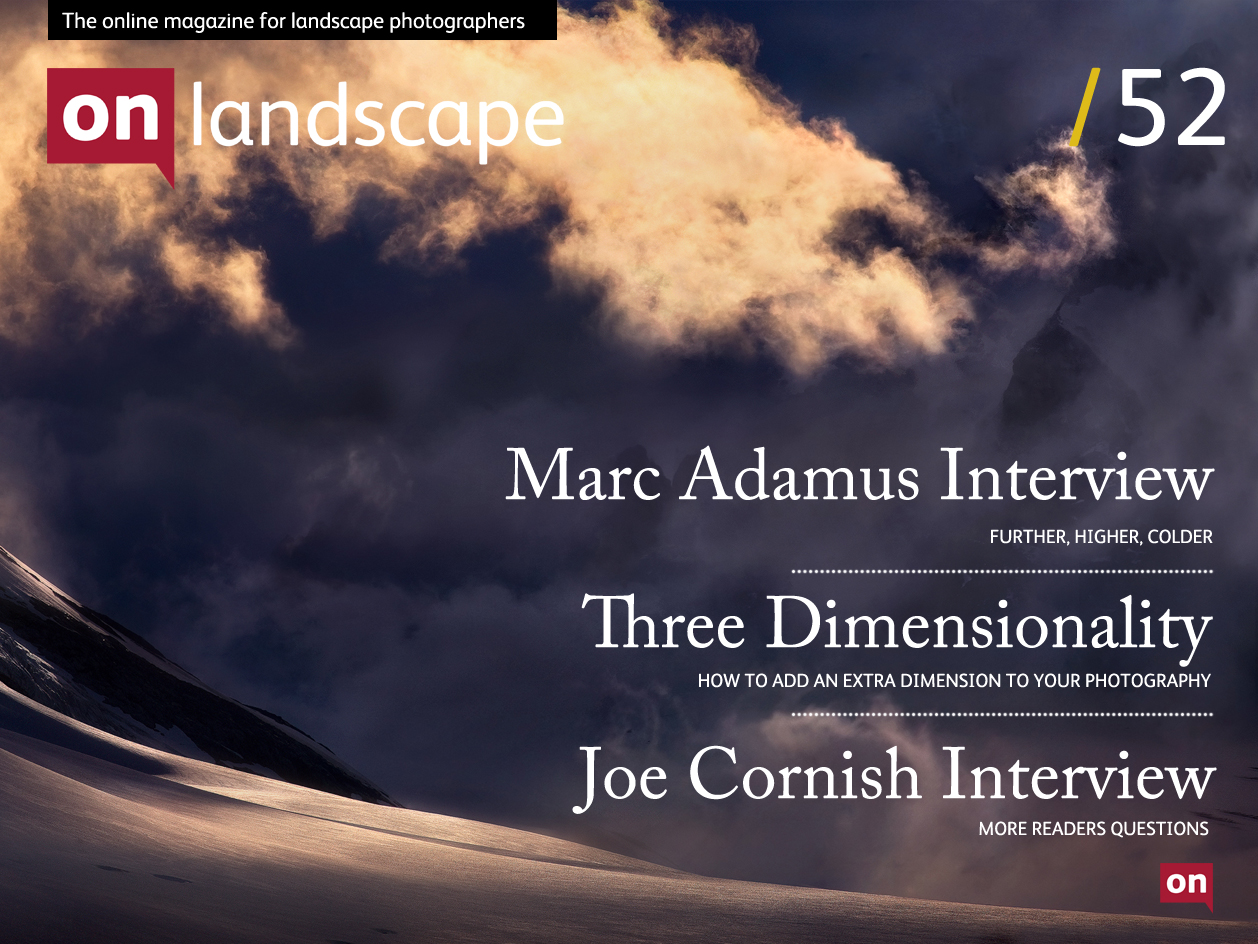 Getting our Subscribers Featured

Adding New Depth to your Pictures

The Landscape of Morocco

An Overview from an Experienced Tour Leader

What’s in Your Bag? Bruce Cairns

What’s in your bag?

The snow has well and truly hit us in the UK over the last two weeks and we've had a load of pictures contributed to our 'call for snowy action' on Facebook. And that reminds me to ask you to like our Facebook page, follow us on Twitter as we're using these channels to inform people about our movements, any competitions and updates (including news) and also to solicit new ideas for the magazine. You can use the icons at the top of the page to get to them - we're also just starting to use Google Plus so if you have the inclination.

We're quite excited to have an interview with one of the top US nature photographers who really embeds himself in some of the most extreme weather conditions. Marc Adamus was a pleasure to interview and he allowed us to share some high resolution images with our readership.

We also have a review of the "Seduced by Art" exhibition at the National Gallery and the "Gainsborough, Constable and Turner" at the Royal Academy still to come - two exhibitions worth visiting for very different reasons.

We're on location in the Lake District from tomorrow and will be based in Borrowdale so if you want to meetup somewhere near Grange just drop us a line on Twitter or Facebook! Until next time...

p.s. Don't forget that we're working on the PDF after we get the issue ready so until we have content a month in advance the PDF will lag behind the online version by roughly a week.

You can download the PDF by following the link below. The PDF can be viewed using Adobe Acrobot or by using an application such as Goodreader for the iPad. Click here to download issue 52 more →

We’ve wanted to feature mini portfolio’s of images for some time and from next issue that is exactly what we plan to do. We’re not just after your ‘best’ images but we’re after a set of images that fit into a ‘theme’ of some sort; that hang together in a creative way, hopefully more than just geographic but that would be if the pictures are strong enough and ‘work’ together. Submitting Images If you want to submit images to the 4x4 more →

Just before Christmas we asked our readers for a bunch of questions that we could put to Joe Cornish when he visited next and the response was fantastic. In the end we recorded two hours of audio but to keep installments to a useful length (a lot of people say they listen to them over breakfast or during a commute) we’ve split it into half hour sections. So, a big thank you to Joe and everyone who submitted their questions and here’s more →

Marc Adamus is a photographer who has taken adventure landscape photography to extremes. His hero is Galen Rowell and he shares a lot in common with his lust for further, higher, colder, (insert hyperbolae here) and I would say if Galen were still around today and active his work wouldn't be too far removed from what we're seeing from Marc himself. Although he's based in Oregon, he has travelled and photographed much of North America. We contacted Marc after he released a batch of stunning more →

David Chalmers, a product photographer who specialises in the drink industry, is also a landscape photographer and Joe Cornish recently interviewed him at the Woodend Creative Workspace. His recent work, and the major topic of the talk, is the use of carbon printing but with the extra twist of making the photographs from wood sourced from the copse that the photographs were taken in. We also asked David a few questions which are included below the video including some more →

I’ve written about sensor colour in a previous issue of On Landscape under the title “The Myth of Universal Colour”. In that article I looked at the quite common preconception that if different cameras create pictures with different colours then these can be easily corrected in Photoshop. To recap the reasoning you need to know that ‘colour’ is a perceptual construct (i.e. it gets made up in our heads) which means that the colour red is not a property of more →

It seems like only yesterday that I was told that stereo filmmaking would never be mainstream, that the logisitcs of filming a film twice, in high quality, and then doing the enormous amount of post processing that results in the successful synthesis of a 3D image on a 2D screen, would mean that 3D films would always be one-offs, destined to be shown on Imax screens in theme parks and exhibitions. This was about 13 years ago... before the more →

We asked for some recommendations of people to interview on twitter last year and Samantha cropped up in a couple of recommendations. She very kindly agreed to answer the usual questions so... Can you tell me a little about your education, childhood passions, early exposure to photography and vocation? Growing up in the leafy suburbs in the northwest of England lent itself to my love of nature and my curiosity/passion for art and, especially, drawing. The more I immerse myself into more →

I have had a love affair with South Africa for many years and recently had the good fortune to visit a couple of areas that were virgin territory for me in the company of good friend, Joe Cornish. We visited the Drakensberg Mountains and the Wild Coast in Kwa-Zulu Natal. This article is the first of two and covers the Drakensberg Mountains. First, a little explanation of the area and it’s attraction to photographers. more →

Peter Cox is a landscape photographer based in the south west of Ireland. He moved back from the USA, where he was following according to his own account a rather unsatisfactory career in computer technology, to his native Ireland in 2005. His dream was to make a living from landscape photography, a difficult goal in Ireland to say the least. Although Ireland has produced several world-class landscape photographers over the past decade, many of them still have to make more →

The Landscape of Morocco

Morocco is a country that rewards an itinerant photographer. I have been going there for about 20 years, and each time I am not only excited by what I find in front of my camera, but my photography evolves as I am technically stretched by what I want to achieve creatively... and this is during repeated visits to the same relatively small area of the 'grand sud': the central High Atlas and Sahara. more →

What’s in Your Bag? Bruce Cairns

We met up with Bruce Cairns when we tagged along on a Joe Cornish and David Ward workshop to the Yorkshire Dales. Bruce already had his Sigma DP2 (which he reviewed for us in this issue) with a very lovely JLM L-Plate and Grip on his Gitzo tripod but he let us take a look around his bag which we video'd on our iPhone as well. Don't be fooled by the photograph to more →

What’s in your bag?

A new regular feature for On Landscape is a look into the photographic rucksack. If you're anything like me this changes on a regular basis and depends on where you're going but it's always interesting to see what people take with them and how they organise it. The feature will come in two forms, a short video view or a photo gallery. If you want to send in your own WIYB feature please provide between two and four photos of more →