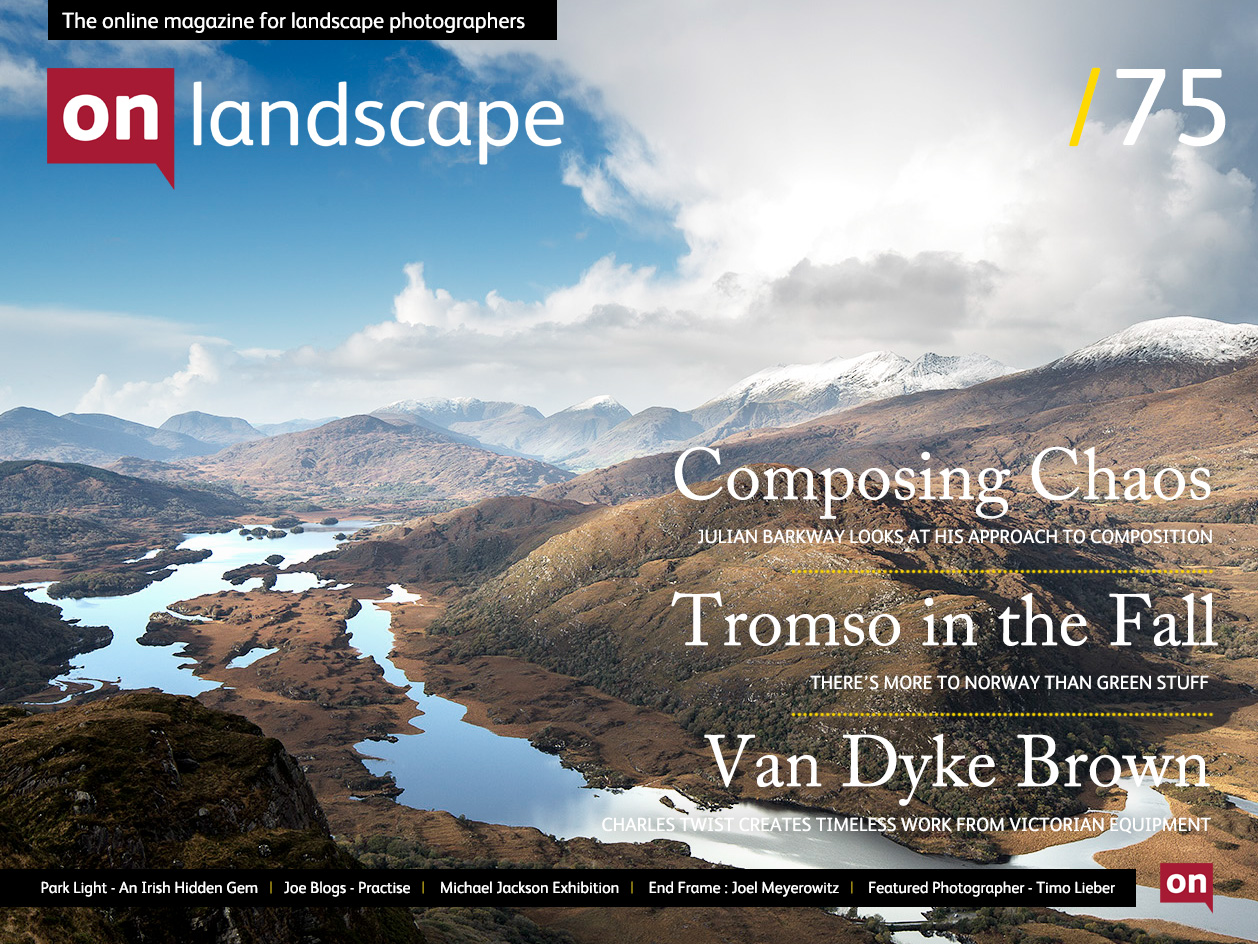 Julian Barkway discusses one of his favourite images

Composition is at the heart of what we do as landscape photographers - more so than in any other genre arguably. And yet finding compositional balance in complex environments is chaotic environments where there is very little inherent structure is something that is incredibly challenging. Julian Barkway approaches the problem in this issue’s “Composing Chaos” where he deconstructs some of his own images to show the .

Adam Pierzchala takes a workshop in Tromso in autumn and shows just how much this area has to offer above and beyond the ‘green stuff in the sky’. At the other end of the saturation spectrum Charles Twist talks about his recent exhibition of Van Dyke prints of the Yorkshire Moors all taken with 150 year old lenses - a timeless combination.

Judging by Norman McClosky’s photographs of Ireland, this country has so much to offer the landscape photographer and I’d be surprised if purchasers weren’t booking trips over there to sample it’s beauty.

We’re continuing with our regular ‘End Frame’ feature this week with Julian Barkway looking at one of Joel Meyerowitz’s classic Cape Light images and we have a new regular feature from Joe Cornish, “Joe Blogs”.

Finally we have a great set of images from German photographer Timo Lieber who is also going to be writing about a trip to the United Arab Emirates he made recently.

You can download the PDF by following the link below. The PDF can be viewed using Adobe Acrobat or by using an application such as Goodreader for the iPad. Click here to download issue 75 more →

Let's face it, nature can be pretty chaotic at times. Not really on the small scale, where natural forms can be elegant and beautiful, or on the large scale, where distance and perspective bring order and a ready visual hierarchy - sky, land, sea, patterns of agriculture: it's all there in front of you. No, it's the bit in the middle where things start getting tricky. The middle-ground can often be a chaotic, confusing place but it can also more →

Am I really here in this wonderful, beautiful setting? A classic calm fjord with crystal blue water lit by soft sun and stunning autumn colour all around? Yes I am, at Ersfjorden on the island of Kvaloya near Tromso in Norway, with a small group of old friends and some new faces. We’ve just arrived on a photo tour with Tony Spencer and David Ward and we were settling into our self-catering accommodation, beautifully located on the edge of more →

If you've been reading On Landscape for a while you'll remember in issue 26 that we interviewed Michael Jackson about his black and white project on the patterns at Poppit Sands. Michael has continued to create more work in the series and has had great success in promoting it to various establishments. This month sees a small 'taster' exhibition at the Beetles & Huxley gallery in London. Ten prints are on show selected from Michael's substantial catalogue of more →

I’ll admit that my knowledge of the Irish landscape is quite minimal. I’ve seen a couple of books (including Paul Wakefield’s) but I probably know the US landscape in more detail thanks to the joys of the interwebs and the areas I do know are probably just the cliches. That’s why it’s nice to see a book going into detail about one area of this so obviously beautiful country so we can see some of the range of beauty more →

Can you tell me a little bit about where the exhibition started from because I know that you have been interested in large format photography for a long time, and specifically the use of old lenses, by which I probably mean pre-1920’s, and old techniques, which you have become interested in I think more over the last few years. It’s the old greasy slope and curiosity killed the cat type problem.  I started off as a 35mm photographer on film more →

It has long been photography's cross to bear that of all the crafts and communication media it is the one whose image is most tainted by associations mechanical (as I suspect David Ward once wrote); that, and its apparent easy-ness. It seems that the vast majority of camera advances involve automation of one sort of another. Make photography easy and cheap enough and everyone can and will take pictures. And that is literally what has happened. George Eastman of more →

Welcome to our featured photographer section where in this issue we'll be talking to Timo Lieber, a German photographer living in London and who has recently been shortlisted at the Sony and Wildlife Photographer awards. Can you tell us a little about your education, childhood passions, early exposure to photography and vocation? My degree and day job are in finance and hold little relevance to photography. I did, however, enjoy helping my dad putting together films from family hikes, so picking more →

When I was asked to contribute to ‘End Frame’ I readily accepted, thinking what could be easier than writing about a favourite photograph? Then I started to think about which photographer to pick, and exactly which image, and the problems suddenly seemed to multiply. Who do I consider my favourite photographers? How can I possibly pick a favourite image from so many? I can easily reel off the names of a good couple of dozen photographers whose imagery I more →