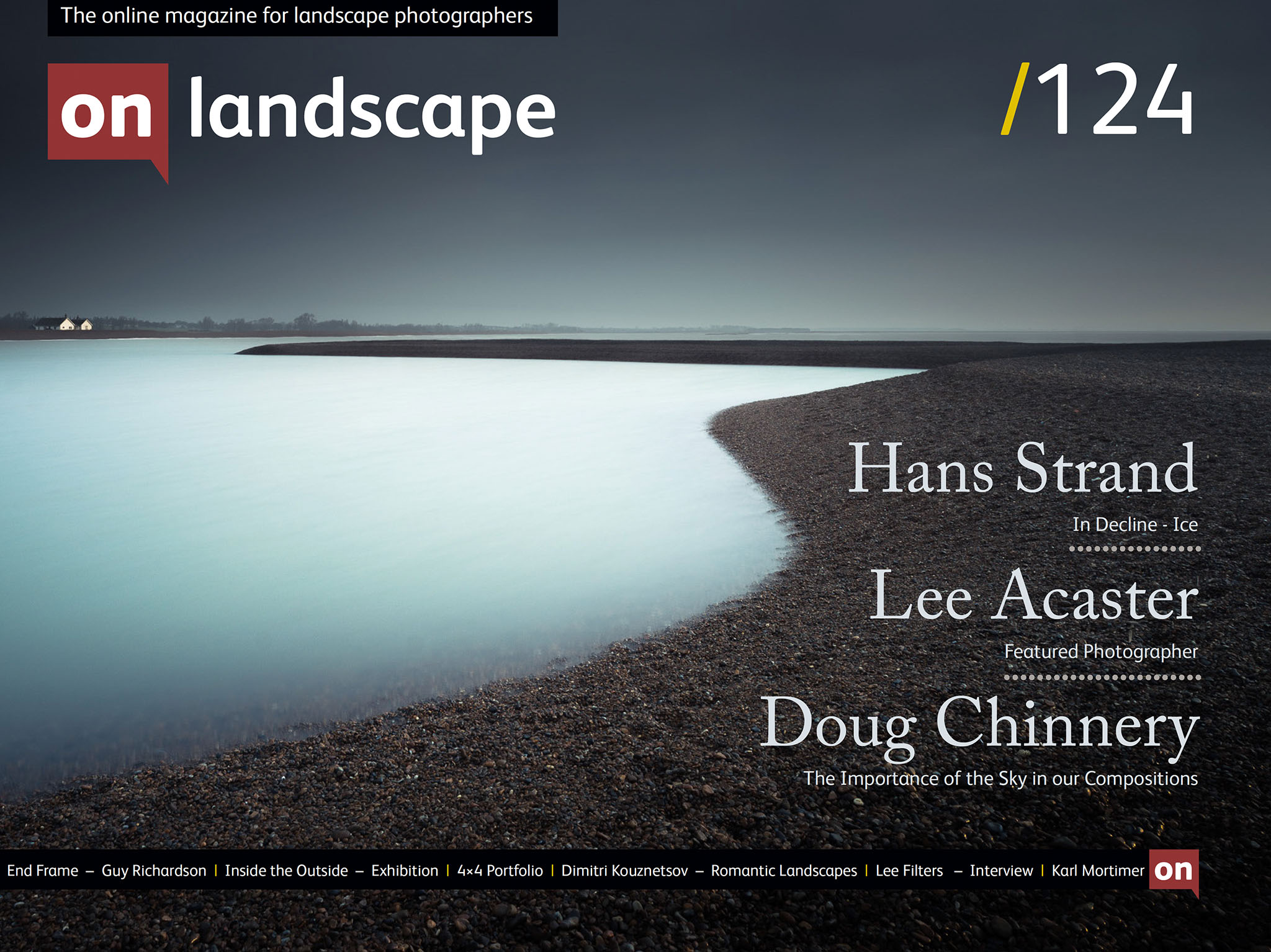 Guy Richardson talks about one of his favourite images

The Inside Track from Jon Cuff

Can the modern photographer profit from these ideas?

The Freedom of Constraints

The Importance of the Sky in our Compositions

Looking for the Silver Lining

An exhibition of photography

A homage to the solid state of water

I’m just about to pop out of the door to go to an exhibition featuring the work by Valda Bailey, John Blakemore, Jacqui Booth, Alex Boyd, Al Brydon, Mike Colechin, Chris Friel, Rob Hudson, Stephen Segasby, Dan Wood and Joseph Wright. You can find out more in the current issue but what I wanted to mention is that each of these individuals (barring John perhaps) would have found it difficult to put on an exhibition of their work on their own and also would have found the task of promoting it to a wide audience quite difficult (never mind the production of a nicely printed show catalog as has just been announced). But by collaborating with like-minded folk, they have sacrificed a little ego in exchange for the opportunity to take part in something bigger. For the visitor to such an exhibition, although it may come across as some sort of “Now that’s what I call Contemporary Fine Art Photography”, what it actually is is a fantastic taster for familiar and unfamiliar artists, and it is unlikely that the average visitor will come away without liking something. Collaboration of this sort is common in the academic art world but seems to disappear once graduation passes and hardly ever happens for the outsider artist. I urge you all to think about your own ways of collaborating with others and creating something similar - whether it be an exhibition, a book, a collective or just an excuse for a few beers down the pub and a natter once a month. Right, coat on and I’m off…

[Also, a few people had a problem downloading the larger PDF last issue and although there were some problems with the latest version of chrome that may have caused part of the problem, the PDF was unusually large because of the community article. When we include a community article next time, we'll make a small selection of the contributed images for the main PDF and issue a second PDF containing all of the contributed pictures. Sorry if this issue caused you any problems]

Ever since stepping into Richard Child’s gallery, I’ve been a huge fan of his work. To pick one favourite image is an impossible task. more →

On a recent visit to On Landscape HQ we asked Jon Cuff from Lee Filters whether he would be able to answer a few questions about the process of creating the filters and a few questions from our readers as well. more →

The principles of human perception, have evolved a lot over the past century of modern art, but still remain close to the origin. Hence, I believe it is worth observing those, that have been well formulated in the flourishing heritage left to us by classical landscape painters. more →

Lee Acaster has built up an enviable track record of competition successes, so it’s likely that you have heard of him and seen some of his images. more →

The Freedom of Constraints

I wanted to produce a cohesive set of work, so a consistent depth of field, wide open, and final rendering styles were decided upon even before the press of the first shutter. more →

The Importance of the Sky in our Compositions

As photographers, we are photographing light and the sky, or perhaps more accurately, the sun, as the source of that light. We are drawn to the colours of light around the edges of the day, at dawn and dusk. more →

Inside the Outside is a collective comprising: Al Brydon, Stephen Segasby, Joseph Wright and myself - Rob Hudson. We were brought together by a similar approach to photographing the landscape. more →

The melt from glaciers provides an even refill of water for creeks and rivers and keep their flow alive all year around. This has been taken for granted until now. Due to global warming, glaciers are shrinking, and so with a speed, we have never seen before. more →