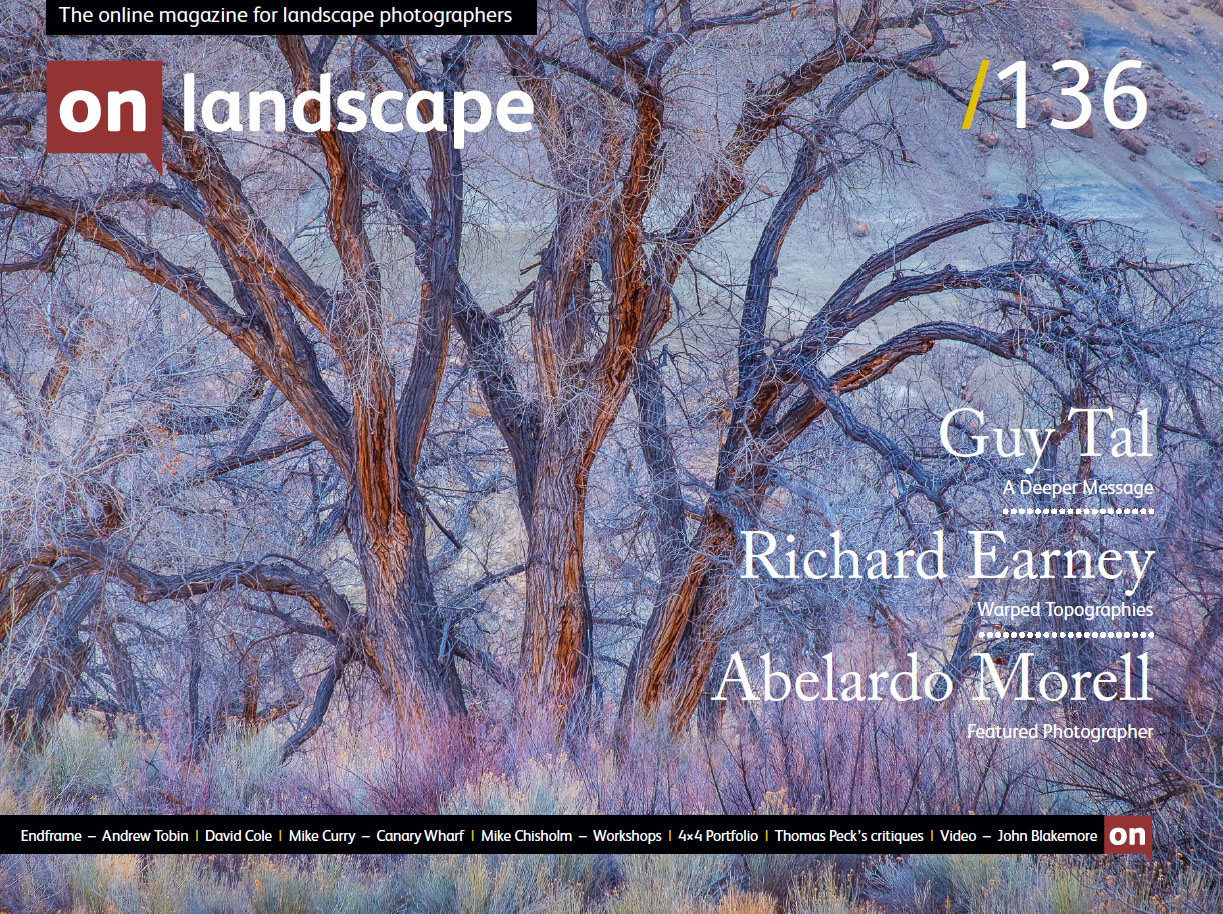 Colin Westgate & Luck in the Landscape

working towards a Fellowship of the RPS

A big thank you to everyone who has submitted portfolios, articles and images to us for inclusion in the magazine over the past seven years. We're proud to say that we've included every Endframe article that we have received and that we have also published every 4x4 portfolio. We don't 'veto' content at all because we think our community is interested in both what inspires us all and the results of that inspiration.

We'd really like to see some more submissions from our readership though so please don't be scared of sending us material. If you're unsure of what to send or would like some feedback on your images or writing, please just let us know (submissions@onlandscape.co.uk) and we'll try to answer any of your questions. Even if you just want a bit of help choosing which pictures to send in or review, we're happy to do what we can.

We'd like to think that On Landscape is a virtual community of like minded individuals who are pursuing their own paths through photography. You may not end up living a life of landscape photography but there is a lot to learn from Guy Tal's comments in this recent issue, "My greatest rewards from photography are not the images I make, no matter how 'stunning' or popular. Rather, my greatest rewards are the ways in which photography helped me chart a course to a profoundly satisfying life."

Thank you again for supporting On Landscape and we look forward to publishing articles or photographs from all of your at some point.

We'd really like to see some more submissions from our readership though so please don't be scared of sending us material. more →

In our third talk of the day, John Blakemore discusses the series of reinventions of his photography from his beginnings after leaving the RAF through his large format black and white projects and up to his current 35mm film work taken around his house in Derby. more →

Colin Westgate’s rather lovely image Island in the Mist is right on the edge of that minimalist/abstract divide. There are perhaps two clear hooks that anchor the picture in reality. more →

I was finally booked onto a residential workshop, my first, with Thomas Joshua Cooper at Peter Goldfield's Duckspool in Somerset. I'm not sure who or what I was expecting. more →

Photography to me has always been a way of augmenting experiences, rather than something to pursue for its own sake. more →

Having to return to the same location time and time again over several months, I began to notice shapes and patterns that motivated me to try to capture in photographic form the images that I was I visualising in my mind. more →

In the early nineties, Abelardo Morell’s decision to photograph the Camera Obscura effect led to an exploration of the interaction between the outside and the inside, initially in black and white and later in colour. He subsequently devised a portable room – effectively a tent fitted with a periscope – which enabled him to take his work outdoors, first into the desert and then into American National Parks. His images of the landscape have an impressionistic quality, but for more →

One location that I have visited a number of times is Dalt Quarry, found not far from the footpath leading from Grange in Borrowdale towards Castle Crag more →

Maybe obsessiveness is the essential to 'art' and creativity. Art not only creates a reaction and provokes a response in the viewer but it can also reveal truths about oneself as the creator. more →